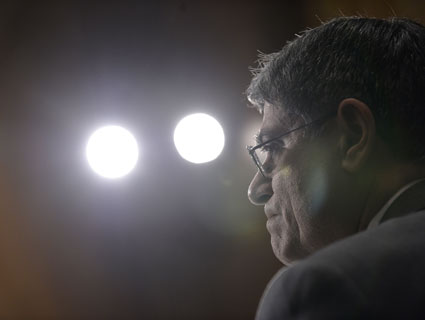 On Wednesday, Mother Jones ran a story on how newly-minted Treasury Secretary Jack Lew is reluctant to take a stand against a series of Wall Street deregulation bills now being considered by the House Financial Services Committee. After the story pubbed, a spokeswoman for Treasury got in touch with Mother Jones to clarify its position.

Last year, Geithner slammed a series of seven bills that would have deregulated Wall Street banks. Those bills never made it to the Senate before the last Congress ended, but a spate of nearly identical bills are being considered again. When asked by Mother Jones whether Lew would echo Geithner’s opposition to them, Lew’s office had no comment, but pointed to recent testimony by another Treasury official warning against messing with the Dodd-Frank Financial Reform Act, the sweeping 2010 law aimed at preventing another 2008-style financial crisis.

Once the story started making the rounds, a spokeswoman for Lew called Mother Jones. “Of course the Treasury secretary would oppose any effort to weaken Wall Street reform,” she said. She pointed to Lew’s recent comments on Bloomberg television. “The purpose of Dodd-Frank was to make sure the American taxpayer would never again be in the position where they had to step in when banks failed,” he told the news channel. “We are committed to that purpose.”

Lew’s spokeswoman also pointed out that Geithner made his statement condemning the bills last year after several of the them had already moved out of committee, and some had passed the House. “We didn’t send the letter until after committee mark up, not while the bills were still in committee,” she said. “It doesn’t mean it won’t happen.” Reformers complain that silence—or stalling, as it may be—on Lew’s part corresponds with Obama administration’s general reluctance to protect Dodd-Frank from attacks on all sides, whether that be in the courts, or regulatory agencies, or in Congress.

The seven deregulatory bills have been presented as technical fixes to Dodd-Frank, but most of them aren’t. One bill would allow certain derivatives that are traded among a corporation’s various affiliates to be exempt from almost all new Dodd-Frank regulations. Another measure would expand the types of trading risks that banks can take on. A third bill would allow big multinational US banks to escape US regulations by operating through international arms.

Financial reform advocates say it’s way too early to alter Dodd-Frank, because even though it is technically the law of the land, regulatory agencies have yet to finish crafting it into rules that can be enforced. Whatever Lew’s reasons for waiting to denounce lawmakers’ efforts to gut Wall Street reform, reform advocates are hoping he’ll stick to a recent promise his spokeswoman pointed to: “We have to finish implementing [Dodd-Frank],” he said on CNBC. “I’m committed to using the authority that I have to drive that process forward.”

Update: After this story, the Treasury Department got in touch with Mother Jones to further reiterate its support for Dodd-Frank.