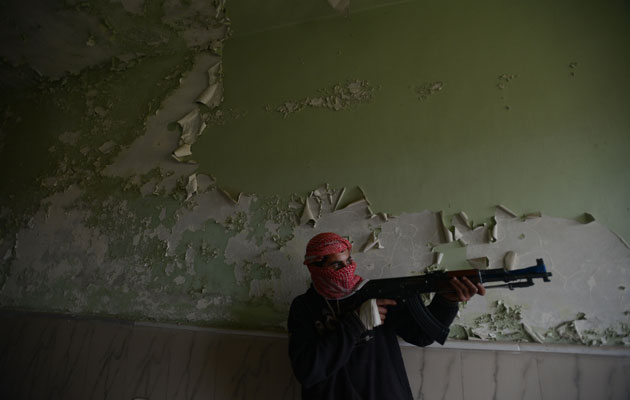 A Free Syrian Army rebel holds his position during fighting in the strategic village of Aldoreneh, Syria, in December 2012.Miguel Juarez Lugo/Zuma

What do the most hawkish neocons desire in Syria? A full US military presence in the air and on the ground.

In recent days, hawks on the right (and the left) have pumped up the volume in calling for US military action in Syria. Last week, President Barack Obama sent a letter to key members of Congress saying that US intelligence has obtained evidence of “small-scale” use of chemical weapons, presumably by forces associated with the Syrian government. But the White House has noted that the “chain of custody” for these weapons hadn’t been confirmed and that further corroboration was needed. The use of any chemical weapons in Syria by government forces would violate the “red line” Obama declared last year.

But the president in the past few days, most notably at his press conference on Tuesday, has stated that he intends to proceed deliberatively and that more information is necessary before reaching a firm conclusion about the use of chemical weapons. He also said at the press conference that if confirmation is obtained, it would be a “game changer” for the “international community”—that is, not a cause for immediate unilateral US military action—and that it would cause him to “rethink the range of options.” In recent days, White House aides have told me that possible responses (for which Obama would seek support at the United Nations and the Arab League) could include boosting or changing the nature of the now-nonlethal aid being provided to anti-government rebels or a “limited” military strike on a target related to chemical weapons or of symbolic or strategic importance to Damascus. “There are no easy answers,” more than one White House aide has said with a sigh, noting that many rebels are now tied to Al Qaeda or other extremists and the Syrian government maintains a state-of-the-art air defense system.

The usual hawks, though, are pushing for immediate and elaborate military intervention—without always being specific. On ABC’s This Week, Rep. Mike Rogers (R-Mich.), the chair of the House intelligence committee, said the red line “cannot be a dotted line” and “some action needs to be taken.” On CBS’s Face the Nation, Sen. Lindsey Graham (R-S.C.) maintained “there’s a growing consensus in the US Senate that the United States should get involved.” And several Democrats have echoed the call for doing something in response to the latest reports on chemical weapons. Sen. Dianne Feinstein (D-Calif.), the chair of the Senate intelligence committee, said “action must be taken.” House Democratic leader Nancy Pelosi said, “I myself think that we have tolerated for too long all of the assaults on the Syrian people made by its own government. I think we have to take it to the next step.” But, she added, “That does not mean troops on the ground.”

Sen. John McCain (R-Ariz.), while fervently urging military intervention, agreed no US troops should intrude upon Syrian territory. He called for an international force that would locate and secure chemical weapons in Syria. “There are a number of caches of these chemical weapons,” he said. “They cannot fail into the hands of the jihadists.” He repeated his proposal for establishing a no-fly zone and providing arms to the rebels, who already have been receiving weapons from Saudi Arabia and Qatar, which are each eager to back the Sunni opposition fighting the Alawites of Bashar al-Assad’s regime. McCain, though, did caution against placing US “boots on the ground in Syria,” contending “that would turn the people against us.” Even neocon favorite John Bolton, in a Wall Street Journal article slamming Obama for, yes, foreign policy fecklessness, pointed out that military action aimed at Syrian chemical weapons is an iffy propsect: “[T]he humanitarian costs of chemical-weapons use inside Syria are potentially high, but so are the risks to American and allied forces trying to destroy or seize chemical weapons, given the dangers and complexities involved.” (He also noted “the unpleasant fact that the opposition is thick with terrorists—including al Qaeda—and radical Islamicists.”)

But real neocons, it seems, do not get squishy when the question is US troops on Syrian soil. After Obama’s press conference, a publicist for the American Center for Democracy shot out a press release touting the group’s director, Rachel Ehrenfeld, and her proposals for action in Syria. She has three simple steps for the United States: bypass the United Nations and impose a no-fly zone in Syria; stop giving arms to rebels associated with Al Qaeda; and deploy US troops within Syria to secure chemical-weapons facilities. Given that Syria probably has scores, if not hundreds, of chemical-weapons sites, such a force would entail tens of thousands of US troops, perhaps hundreds of thousands. And these soldiers would likely have to fight their way to these sites. (No cake-walking here.)

Her proposal would entail invading Syria with a massive force of US troops. But Ehrenfeld’s position is not that surprising, considering the board members and advisers for her American Center for Democracy. They include Richard Perle, one of the most hawkish neocons, who led the cheerleading for the invasion of Iraq, and former CIA chief R. James Woolsey, who after 9/11 promoted the neoconnish conspiracy theory that Saddam Hussein was the secret puppet master controlling Al Qaeda. On the ACD’s list of advisers are retired Lt. General Thomas McInerney and retired Maj. General Paul Vallely, who were each over-the-top supporters of the Iraq War on Fox News.

One sign that Syria is indeed a hard case is that the neocons and the usual hawks are not entirely united. They are torn over whether to arm the anti-Assad forces, substantial portions of which are aligned with jihadists and extremists hostile to the United States, Israel, and the West. Some are squeamish about sending in US troops. Yet Bill Kristol, the son-of-the-godfather of the neocons, a few days ago denounced Obama’s reluctance to take military action in Syria and proclaimed, “No one wants to start wars, but you’ve got to do what you’ve got to do.” Ehrenfeld and the American Center for Democracy are demonstrating that the most hawkish neocons are ready to heed Kristol and go all-out in Syria. They want American boots on the ground, and they’re not likely to stop squawking until there is an invasion.