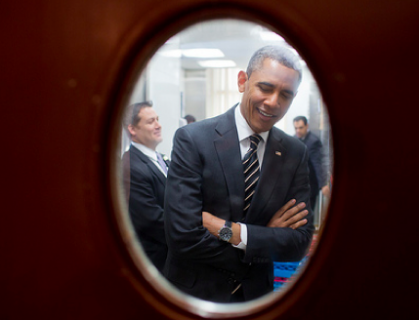 The Obama administration entered the White House pledging to be the most transparent in history. Since then, the administration has hit more national-security whistleblowers, who are arguably in a position to expose the worst abuses of government power, with the Espionage Act than all previous administrations combined, often lumping them in with criminal leakers and spies.

But Obama defenders point out that, thanks to the president’s Whistleblower Protection Enhancement Act, other types of federal whistleblowers have gained unprecedented protections, including compensation in successful cases and stronger penalties against retaliatory managers. Now that silver lining could vanish, a casualty of a lengthy legal battle between whistleblower advocates and several government agencies.

The case, Berry v. Conyers, involves Obama’s Office of Personnel Management and two Department of Defense employees, neither occupying a high-level or particularly sensitive position: One did stockroom management and the other was an accounting technician (basically a bookkeeper). Both employees were deemed ineligible to access classified or sensitive information, and as a result, the stockroom manager was demoted to grocery clerk, and the bookkeeper was indefinitely suspended. The workers took their cases separately to the Merit Systems Protection Board (MSPB), an independent government board created under the Civil Service Reform Act in 1978 to ensure federal workers are hired and fired based on merit, and to protect federal whistleblowers.

In August, the appeals court ruled 2-1 that even though the Defense employees’ jobs were “noncritical sensitive” positions—roles where an employee doesn’t necessarily have access to classified information, but could still potentially “damage…national security”—their positions are ineligible for review by the MSPB, the main avenue of recourse for civil servants who say they’ve been wrongfully terminated.

The ruling effectively expanded the definition of nat-sec workers to include potentially thousands of additional federal employees—even those whose jobs have nothing to do with classified information—leaving them unable to access key civil-service protections in a whistleblower case. Traditionally, only employees charged with safeguarding the country’s deepest secrets, like FBI and CIA agents, have been denied this kind of appeal. Tom Devine, legal director at the Government Accountability Project, says that under the ruling, these employees won’t even be able to hire a private attorney and file a civil suit, because “as a rule, they can’t go to court except to appeal Board rulings.” (The exception is if an employee can prove they were let go due to discrimination based on race, gender, age, or other categories under Equal Employment Opportunity law. But that won’t help whistleblowers.)

“With this case, all ‘sensitive’ employees will virtually lose the right to defend themselves against charges of misconduct,” Devine notes.

The court cited a 1988 Supreme Court decision involving a laborer at a naval facility who was fired after being denied a national-security clearance. The court ruled that the MSPB couldn’t review his case since it involved national-security concerns, just like the ruling in Berry v. Conyers. In that case, however, clearance was a requirement for the laborer’s job. That apparently wasn’t the case for the employees in Conyers. As the dissenting judge in Conyers pointed out, “The employees’ positions here required no such access, and the employees in question had no security clearances. Far from supporting elimination of Board jurisdiction in such circumstances, [the 1988 case] explicitly recognized that [these] national security employees could challenge their removal before the Board.”

The majority disagreed, saying the eligibility of defense employees to occupy sensitive position should be the agency’s call, and not for the courts to second guess. The sole dissenting judge said in his opinion that the ruling leaves “hundreds of thousands of federal employees” out in the cold in the face of retaliatory measures, simply because the Pentagon says so. (The Department of Justice did not respond to request for comment from Mother Jones about the case.)

The federal appeals court granted another hearing on May 24, and the Obama administration rushed out a memo asking the Director of National Intelligence and the Office of Personnel Management to quickly come up with a litmus test for deciding which federal positions can be classified as being “sensitive,” citing a 2010 OPM proposal that aimed to dramatically expand the number of national security employees.

Whistleblower advocates say the court ruling and the president’s memo spell a major rewiring of the Whistleblower Protection Enhancement Act. “It’s not that OPM and DOJ are arguing that whistleblowers in sensitive positions shouldn’t have access to protections. It’s an unintended consequence that they have not tried to prevent,” says Angela Canterbury, public policy director at the Project on Government Oversight, where I used to work. “The Obama administration is undermining the same protections they [formerly] supported.”