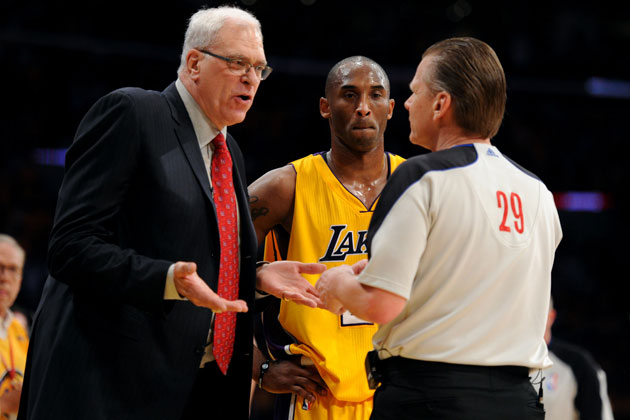 The NBA career of Hall of Famer Phil Jackson spanned six decades: He played 12 years and snagged two league titles for the New York Knicks before winning 11 more championships as the coach of stars like Michael Jordan, Scottie Pippen, Kobe Bryant, and Shaquille O’Neal. But during all of his time in the league, he said in a Huffington Post Live interview earlier this week, he’s “never run into” gay professional basketball players.

Maybe Jackson’s Zen-ness got in the way of the 67-year-old’s memory and common sense, so let’s help him out:

More generally, the time when athletes and coaches can deny that there are gay players in pro locker rooms seems to be coming to end. Earlier today, Brendon Ayanbadejo, the former Baltimore Ravens linebacker whose gay-marriage advocacy was criticized by a Maryland state legislator (who in turn was famously blasted by Minnesota Vikings punter Chris Kluwe on Deadspin), told the Baltimore Sun today that “up to four” NFL players were considering coming out simultaneously sometime in the not-too-distant future:

“I think it will happen sooner than you think,” Ayanbadejo said. “We’re in talks with a handful of players who are considering it. There are up to four players being talked to right now and they’re trying to be organized so they can come out on the same day together. It would make a major splash and take the pressure off one guy. It would be a monumental day if a handful or a few guys come out.

“Of course, there would be backlash. If they could share the backlash, it would be more positive. It’s cool. It’s exciting. We’re in talks with a few guys who are considering it. The NFL and organizations are already being proactive and open if a player does it and if something negative happens. We’ll see what happens.”

The two most-recent big-name athletes to come out of the closet were both soccer players: Robbie Rogers, who played for the US national soccer team, made his announcement in February, while women’s star Megan Rapinoe came out before last year’s Olympics. And while no NFL, NBA, or Major League Baseball player has ever come out of the closet while still playing, that looks like it will change sooner than later. So if the Zen Master ends up taking a job in an NBA front office, maybe he’ll finally run into an openly gay NBA player.