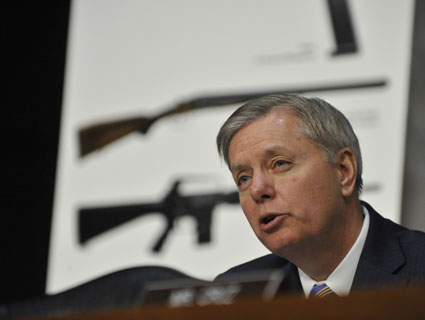 As families of Newtown massacre victims watched from the gallery, the Senate voted 68 to 31 on Thursday morning to allow the Democratic gun package to proceed to a formal vote. Sixteen Republicans voted to move forward on the bill (see the full list below), easily warding off a filibuster threat from Sen. Rand Paul (Ky.) and 13 other Republicans. Two Democrats, Sens. Mark Begich (Alaska) and Mark Pryor (Ark.), voted against proceeding to formal debate on the bill.

Now begins the real test: Republicans and Democrats will offer a series of amendments, after which Republicans can still filibuster a vote on the final bill. If the bill survives the Senate it will head to the GOP-led House, where conservative Republicans like Rep. Steve Stockman (Texas) are pressuring Speaker John Boehner (Ohio) to block it from reaching the floor. (Some Republicans are apparently siding with Democrats, however.)

After Thursday’s Senate vote, Reid said that the Manchin-Toomey amendment would be heard on Tuesday. Reid also reaffirmed his vow to allow votes on amendments to ban high-capacity magazines and assault weapons. “Some people love [the assault weapons ban], some people hate it. But we’re going to have a vote on it,” he said on the Senate floor.

The National Rifle Association, which initially called the Manchin-Toomey compromise a “positive development” that took a step away from the universal background checks called for in Schumer’s bill, later penned a letter to senators calling the compromise “misguided” and warning them that the NRA would be keeping tabs on senators who voted for “anti-gun” amendments.

“[T]he NRA will oppose any amendments offered to [Schumer’s bill] that restrict fundamental Second Amendment freedoms; including, but not limited to, proposals that would ban commonly and lawfully owned firearms and magazines or criminalize the private transfer of firearms through an expansion of background checks,” the letter read.

Here are the Republicans who voted to move forward on the gun bill: