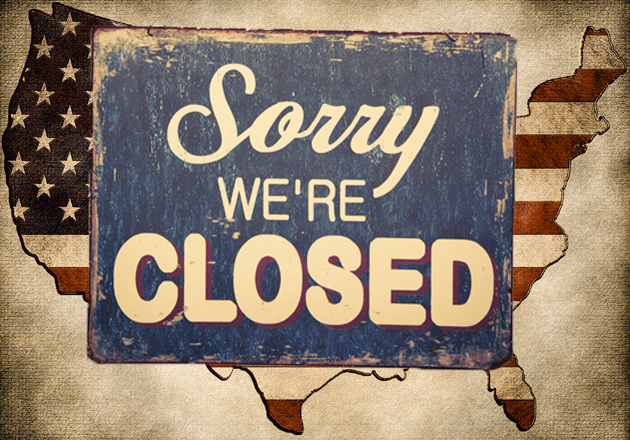 Starting March 1, federal programs and their state and local beneficiaries began grappling with $85.4 billion in cuts mandated by the Budget Control Act of 2011. Some programs have been spared—Congress voted to restore tuition assistance for members of the armed services and, just last week, restored funding to the Federal Aviation Administration to forestall flight-delaying furloughs. But for the most part, the cuts have remained intact. Six weeks in, we took a look at how sequestration is has impacted 50 states, from canceled festivals to shuttered Head Start programs to massive layoffs.

Fairbanks: Alaska Volcano Observatory is cutting back on volcano and earthquake monitoring.

Eielson Air Force Base: 18th Aggressor Squadron will be grounded until the end of the fiscal year.

Phoenix: 30 research engineers at a defense contractor laid off.

Hot Springs: Campgrounds at Hot Springs National Park are closed for the summer, hours of operation will be scaled back, and rangers won’t plant any trees despite losing thousands of them in the park in last winter’s storms.

Bakersfield: Community Action Partnership of Kern, which receives 77 percent of its funding from Washington, forced to shut down its 44 Head Start programs two weeks early.

Eureka: Federal courts will begin mandating one furlough per month at locations in San Francisco, San Jose, and the Lost Coast.

Colorado Springs: Intelligent Software Solutions Inc. laid off 40 employees in March after its Air Force contract was put on ice.

Manchester: Private medical practice informs patients it can no longer treat people who are on Medicare.

Dover: 700 civilian employees at Dover Air Force Base to be furloughed beginning in April.

Wilmington: 52 employees of Delaware Hospice laid off in part due to cuts to Medicare reimbursements.

Atlanta: Funding for a cancer research project at Emory University reduced from 12 months to 6.

Albany: 10 disability aides and three family service workers will be laid off due to cuts to the Southwest Georgia Community Action Council.

Lapwai: Water gauge on Lapwai Creek one of three USGS gauges being closed in the state, affecting agriculture industries and flood control.

Rock Island: 175 employees of the Army’s Rock Island Arsenal being laid off or seeing their contracts expire.

Granite City: School board lays off nine teachers due to budget cuts.

Columbus: Holding a lottery to determine who will remain in the local Head Start program after 36 slots were cut in two cities.

Wichita: Head Start services stopped for 71 kids, and 10 staff positions have been eliminated.

Topeka: A 14 percent drop in funding for Kansas’ federal court is creating a backlog in cases, and longer delays before defendants can meet with their lawyers.

Portland: Maine Public Broadcasting to lay off 10 employees, in part due to sequestration.

Red Lake: White Earth Reservation forced to lay off security guards in district that was the site of a 2005 school shooting that left seven students dead in 2005.

St. Charles: Head Start facility closed on April 12, while reducing the number of kids served by 65, and laying off 18 staffers.

Fort Peck: Workers at Army Corps of Engineers dam notified by email that they will be forced to take unpaid leave.

Kalispell: Glacier Oncology, the state’s only private cancer clinic, says patients will have to travel to Washington, DC, for treatment.

Bellevue: Defenders of Freedom Open House and Air Show, which normally draws 150,000 people to Offutt Air Force Base, has been canceled.

Nellis Air Force Base: 600 civilian technicians to be furloughed in April.

Portsmouth: Funding for the Naval shipyard’s STEM outreach program to middle- and high school girls has been eliminated.

Berlin: National Guard civilian technicians here among 700 who will receive a 22 percent pay cut from now until September.

Morristown: Morris County Head Start program considering laying off five teachers and reducing the number of students served by as many as 34.

Albuquerque: 300 patients at Cancer Center informed they’ll have to go elsewhere due to Medicare cuts.

Farmington: 15 vacant positions at the Bureau of Land Management will go unfilled.

Belmont: Allegany County Head Start program ending one week early, staff losing between a week and a month of work.

Greensboro: Industries for the Blind, which gets 98 percent of its business from the government and has a mostly blind workforce, laid off 40 employees.

Medora: Painted Canyon Overlook, one of the most popular sites at Theodore Roosevelt National Park, is closed indefinitely.

Devils Lake: 70 Air National Guard civilian technicians to be furloughed in May.

Fargo: The Fargo AirSho, which draws 30,000 visitors annually, may be canceled after the Blue Angels were grounded for the summer.

Cincinnati: Cuts to the General Services Administration led to 28 layoffs at the Cincinnati Association for the Blind and Visually Impaired’s Industries Progam.

Cincinnati: 200 kids are being dropped from the city’s Head Start program.

Tulsa: State department of labor closing its city office, leaving 11 employees the choice of taking a buyout or relocating.

Lawton: 26 Northrop Grumman employees received layoff notices in March due to the impending expiration of a DoD contract.

Newport: Yaquina Head Lighthouse closed to tours, due to cuts at the Bureau of Land Management.

Sumter: 20 F-16s at Shaw Air Force Base have been grounded.

Tellico Plains: Army contractor Tellico Services Inc. furloughs 85 of 200 employees indefinitely, due to lack of orders from the Department of Defense.

Dallas: Public defender’s office will be closed every Friday for six months.

Leander: Massive funding cuts will lead to a reduction of between 4,800 to 7,700 meals for seniors.

Burlington: School district considering eliminating up to 40 positions due to massive budget cuts.

Seattle: Federal public defenders began serving up to 14 days of furloughs in March; will be closed on Fridays.

Alderson: Main Street program is one of five VISTA anti-poverty programs that has been put on hold in West Virginia. 47 positions will be lost in the state unless funding is restored.

Martinsburg: 98 contractors at the Bureau of Alcohol, Tobacco, Firearms, and Explosives were laid off in April.

Madison: Public defender’s offices in the state capital and two other cities to begin furloughs.