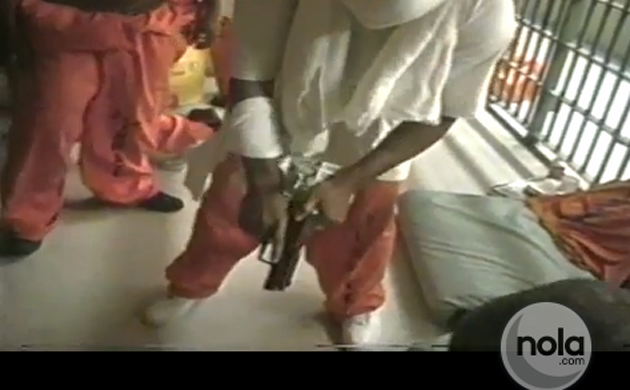 Video still of an an Orleans Parish prisoner handling a loaded gun NOLA.com

We will be rolling out more prison profiles in the coming days, complete with photos and video. Today let’s head over to the Big Easy to visit what the Justice Department has deemed a “violent and dangerous institution.” 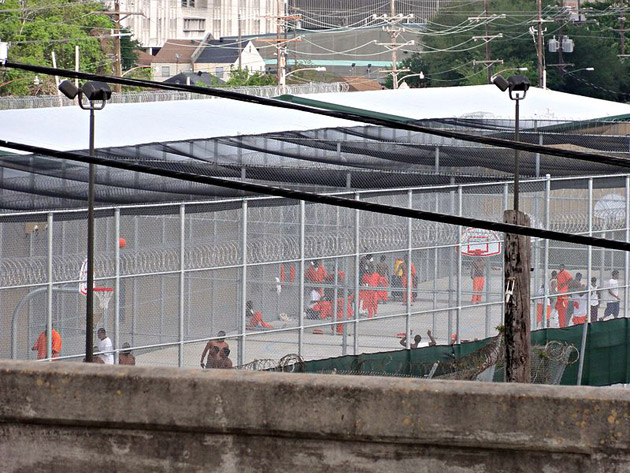 The basics: New Orleans’ barbaric city jail first hit the national radar after Hurricane Katrina, when thousands of inmates were abandoned for days in flooded cells without food, water, ventilation, or electricity—some of them were “standing in sewage-tainted water up to their chests,” according to the ACLU. But OPP’s problems neither began with Katrina nor ended in the storm’s wake, when prisoners were taken back to the surviving buildings.

Almost half of all prisoners at OPP are pretrial, accused but not convicted of crimes. Yet a stint here can be a de facto death sentence. According to investigations by the Justice Department, in the past two years, at least two inmates have managed to kill themselves while on suicide watch—one of them by stuffing toilet paper into his mouth until he suffocated. A third died while being held in five-point restraints. A fourth was found dead after allegedly being beaten and pepper sprayed (PDF). Prisoners also say that the guards supply them with drugs, and will often stand by during a melee and let inmates fight themselves bloody, according to a criminal defense attorney who served time at OPP himself.

In an interview with Mother Jones, Sheriff Gusman and jail doctor Samuel Gore disputed some of these details. In the pepper-spray incident, they contend, the man died three or four days afterward, and not as a result of his altercation: “The autopsy was clear,” Gore says. “It was not a violent death. There was just minor bruises and minor abrasions.” The restrained woman, the doctor says, was acting beligerent, spitting at deputies and “voicing suicidal ideations.” She had slipped her restraints and then, as staffers tried to put her back into them, stopped breathing and went “flaccid.” She was resuscitated and taken to the hospital where she died—the cause was not determined. As for guards supplying drugs, Gusman said: “We have a zero-tolerance drug policy here. We looked at our records. Last time we arrested an employee was in 2011. Does it happen? Can it happen? Sure, it can happen. We take it very seriously.”

During a single month in 2012, according to Southern Poverty Law Center attorney Katie Schwartzmann, OPP sent 23 prisoners to the ER with severe injuries—fractures, stab wounds, lacerations, puncture wounds, etc.—resulting from violence at the jail, which handled countless others in its own infirmary. (“They counted every time we sent someone for an x-ray, Gore contends, even for injuries that might have resulted from a “minor altercation” or a basketball game; Schwartzmann stands by her figures.)

In an April 2012 letter, the Justice Department’s civil rights division upbraided Sheriff Gusman, noting that the “alarming conditions” previously identified at the jail had, if anything, gotten worse. “OPP is a violent and dangerous institution,” it stated, with “widespread sexual assaults.” The facility, it goes on, “is deliberately indifferent to prisoners with serious medical and mental health needs.”

The backlash: An epidemic of rapes, beatings by deputies, barely edible food, poor sanitation, and inadequate medical care puts the jail’s residents “at imminent risk of serious harm,” according to a class-action lawsuit filed by the SPLC in April 2012. Last December, the Orleans Parish Sheriff’s Office signed a federal consent decree (PDF) promising to improve conditions at the jail. But Gusman is still fighting with the feds and the mayor over who would oversee the changes, and who would pay for them.

Watch: The court battle against OPP recently gave rise to a new and damning piece of evidence: a video of prisoners in a cell at OPP drinking, shooting drugs, and, perhaps most disturbingly, handling a loaded gun. When asked about the video, Gusman responded: “It supposedly happened over four years ago. They never found any gun when we searched. It’s one of those things that, hey, it’s a horrible thing. And, um, it looked like it was an isolated event, if it happened.”

Also watch: In this video, an OPP prisoner talks about her Katrina ordeal.

Next prison: A feared facility whose residents are victimized by a “savage gang of deputies.”