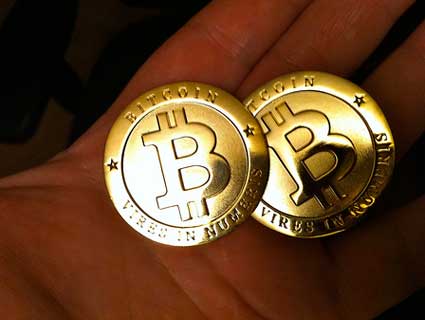 In what may be the first move toward a federal shutdown of the wildly popular online currency known as Bitcoin, the Department of Homeland Security today issued an order that has restricted the transfer of funds in and out of Mt. Gox, the Bitcoin exchange that handles some 60 percent of the transactions.

A creation of bank-fearing techies, Bitcoins are now worth more than $1 billion, and consumer interest has been skyrocketing. For more background, read our Bitcoin explainer.

The DHS is focusing on Dwolla, an online payment system (sort of like PayPal) that has become a popular way for Bitcoin users to transfer money to and from Mt. Gox. A Dwolla spokesman confirmed to BetaBeat that DHS and the US District Court for the District of Maryland have issued a “seizure warrant” for funds associated with the company’s Mt. Gox account, which is known as Mutum Sigillum.

“In light of the court order,” Dwolla told BetaBeat, “…Dwolla has ceased all account services associated with Mutum Sigillum.”

The shutdown was first brought to light earlier today by Chris Coyne, the founder of OKCupid, who posted the following screenshot of an email from Dwolla notifying him of the DHS crackdown: 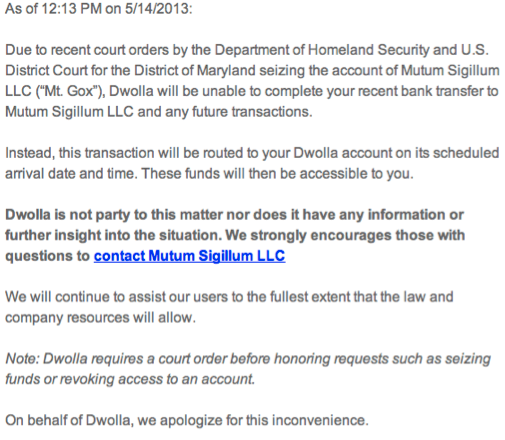 The reason for the seizure is not entirely clear. Up to a point, Bitcoins may be allowable under federal law, but “if Bitcoins facilitate too much drug-dealing or money laundering, the US government could make their production illegal,” Harvard public policy lecturer Steven Strauss wrote recently on the Huffington Post. And, of course, there are federal statues making it illegal to produce a separate currency.

Calls and emails from Mother Jones to Mt. Gox, Dwolla, and DHS were not immediately returned.