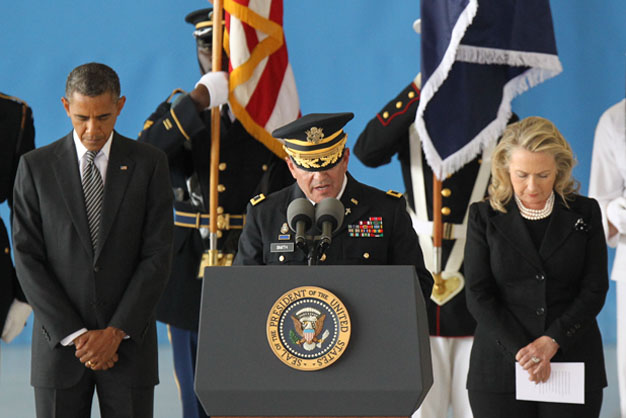 President Barack Obama and Secretary of State Hillary Clinton take part in the Transfer of Remains Ceremony marking the return to the United States of the remains of the four Americans killed in Benghazi, Libya.Molly Riley/DPA/Zuma

The latest revelations about the Benghazi talking points—as opposed to what actually happened at the US diplomatic facility at Benghazi, where four Americans died—do not back up Republican Sen. Lindsey Graham’s hyperbolic and absurd claim that the Benghazi controversy is Obama’s Watergate. But neither are they nothing.

As ABC News reported on Friday morning, the most discussed talking points in US diplomatic history were revised multiple times before being passed to UN Ambassador Susan Rice prior to her appearances last September on Sunday talk shows. The revisions—which deleted several lines noting that the CIA months before the attack had produced intelligence reports on the threat of Al Qaeda-linked extremists in Benghazi—appear to have been driven by State Department spokesperson Victoria Nuland, who, it should be noted, is a career Foggy Bottomer who has served Republican and Democratic administrations, not a political appointee. Her motive seems obvious: fend off a CIA CYA move that could make the State Department look lousy. (The other major deletion concerned three sentences about a possible link between the attack and Ansar al-Sharia, an Al Qaeda-affiliated group; last November, David Petraeus, the former CIA chief, testified that this information was removed from the talking points in order to avoid tipping off the group.)

But here’s the problem for the White House: It was part of the interagency process in which State sought to downplay information that might have raised questions about its preattack performance. That’s a minor sin (of omission). Yet there’s more: On November 28, White House spokesman Jay Carney said, “Those talking points originated from the intelligence community. They reflect the IC’s best assessments of what they thought had happened. The White House and the State Department have made clear that the single adjustment that was made to those talking points by either of those two institutions were changing the word ‘consulate’ to ‘diplomatic facility because ‘consulate’ was inaccurate.”

Assuming the talking points revisions released by ABC News are accurate—and the White House has not challenged them—Carney’s statement was not correct. The State Department did far more than change one word, and it did so in a process involving White House aides. So, White House critics can argue, Carney put out bad information and did not acknowledge that State had massaged the talking points to protect itself from inconvenient questions.

This is not much of cover-up. There is no evidence the White House is hiding the truth about what occurred in Benghazi. My colleague Kevin Drum dismisses this recent Benghazi news (“on a scale of 1 to 10, this is about a 1.5”). But the White House has indeed been caught not telling the full story. Despite Carney’s statement, there was politically minded handling of the talking points. Yet in today’s hyperpartisan environment, such a matter cannot be evaluated with a sense of proportion. Obama antagonists decry it as a deed most foul, and White House defenders denounce the the critics. The talking points dispute is not a scandal; it’s a mess—a small mess—and not as significant as the actions (and non-actions) that led to Benghazi. Yet no mess is too tiny for scandalmongers in need of material.