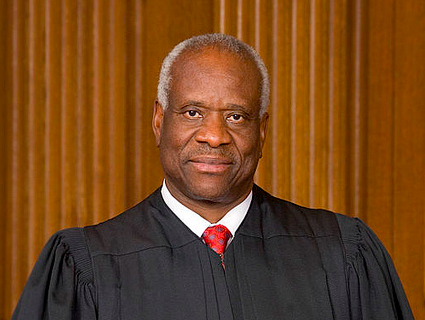 Supreme Court Justice Clarence Thomas says he always figured there’d be a black president, but that it would have to be someone “the elites” and “the media” approve of—an oblique shot at President Barack Obama.

“[T]he thing I always knew is that it would have to be a black president who was approved by the elites and the media because anybody that they didn’t agree with, they would take apart,” Thomas said during a panel about his life and career at Duquesne University in Pittsburgh in early April. “You pick your person. Any black person who says something that is not the prescribed things that they expect from a black person will be picked apart.”

The implication of Thomas’ remarks is that President Obama was only elected because he fits with the “prescribed things that they expect from a black person.” Thomas’ statements were were also aired on C-SPAN and picked up by Fox Nation.

It is unusual for sitting Supreme Court Justices to make public criticisms of sitting presidents. “Clarence Thomas seems more interested in becoming a Fox commentator than preserving the integrity of the Court,” says Adam Winkler, a professor at the University of California School of Law. “Justices should not take pot shots at the president. It’s beneath the dignity of the court.”

Thomas’ perspective may stem in part from the difficult 1991 Supreme Court confirmation battle he faced after being accused of sexual harassment by former colleague Anita Hill. Indeed, they mirror remarks he made at the time, when he said that the confirmation process had become “a high-tech lynching for uppity blacks who in any way deign to think for themselves, to do for themselves, to have different ideas, and it is a message that unless you kowtow to an old order, this is what will happen to you. You will be lynched, destroyed, caricatured by a committee of the US Senate rather than hung from a tree.” A narrow majority of the Senate ultimately voted to confirm Thomas’ appointment. Reporters Jane Mayer and Jill Abramson later published a book providing compelling evidence that Hill had in fact told the truth.

President Barack Obama was twice elected by a majority of the American electorate. Indeed, while there is some wisdom in Thomas’ remarks about race and social expectations, it’s virtually inevitable that any presidential candidate will seek to earn the approval of elites, both financial and in the media itself. Supreme Court justices, on the other hand, serve for life and are by design insulated from popular sentiment.

“There’s a great irony in that Thomas has his position because he was approved by elites in the Senate,” says Winkler, “while Obama owes his position to the voters.”