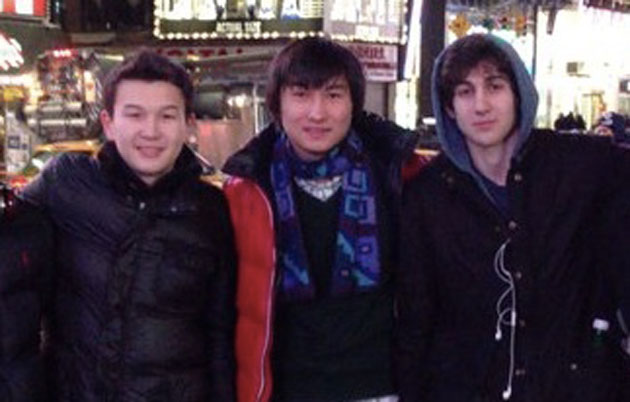 With the news of three additional suspects in federal custody, questions remain about the motive for the Boston Marathon bombing and whether the attack involved conspirators beyond the Tsarnaev brothers. But an account from an acquaintance of the suspects—a student at the University of Massachusetts-Dartmouth who was once romantically involved with Dzhokhar Tsarnaev himself—helps shed light on the individuals now at the center of the investigation.

The woman, who lived in the same dorm at UMass–Dartmouth as Tsarnaev during the 2011-12 academic year, told Mother Jones that she first met and had a “fleeting fling” with the bombing suspect during the fall of 2011. Around the same time, she says, she met Tsarnaev’s college buddies Dias Kadyrbayev, Azamat Tazhayakov, and Robel Phillipos, the men now accused of helping Tsarnaev dispose of evidence and lying to investigators after the bombing.

Kadyrbayev and Tazhayakov, the woman said, were part of a group of about five Russian-speaking friends at the university whom Tsarnaev was never without. “They all sort of idolized Jahar,” she said, using the name she and others knew Tsarnaev by. “Dias was probably the one closest to him.” She said that of the friends, Tsarnaev was the most popular and in touch with campus social life. “I cannot speak to the nature of their relationship because of the language barrier, however I did observe that Jahar was always the leader in his group.”

That may help explain why the two would’ve helped Tsarnaev dispose of evidence after the marathon bombing, as authorities now allege. Whether they did so, and what knowledge they may have had about the bombing, remains unclear.

The woman, who was contacted by Mother Jones, asked to remain anonymous, fearing for the loss of her privacy. Her account of the Boston bombing suspect and his friends was corroborated by another former resident of the UMass-Dartmouth dorm where she met and became involved with Tsarnaev.

She got to know the group, she said, while hanging around campus with them, smoking pot and listening to music. She says her romantic relationship with Tsarnaev lasted for about two weeks. “I met him standing outside a building and honestly, his face was enough to capture my heart,” she explained, noting that lots of women fawned over him. “I walked right up to him and I was like, ‘Oh my God, you are adorable. Can we hang out?’ I’m very forward.”

Her nascent romance with Tsarnaev soon soured, though, after he invited her to come to his dorm room alone. “He wanted to go further than I did, and that made me uncomfortable, and I realized that that’s not the kind of person that I wanted to be around,” she says. “I don’t think that’s necessarily being a terrorist. I think that’s just called being a hands-y teenaged boy.”

She said she remains skeptical that Tsarnaev had a religious motive for carrying out the attack, as has been suggested in the context of his older brother’s apparent radicalization. “He never mentioned anything about religion,” she said. If he had been devoutly religious, he probably wouldn’t have become romantically entangled with her, she added, because she practices a different Eastern religion. “I just can’t see him being a radical jihadist just because of the nature of who he was. I don’t doubt that he did it, but the ‘why?’ behind it—I’m having difficulty believing the news.”

If anything, Tsarnaev’s friend Kadyrbayev may have been more religious, in her view. She described a falling out she had with Kadyrbayev a few months after meeting him. “I went out to a party and he made a comment about how my dress was kind of inappropriate because it was kind of revealing,” she says. “Other than that, I never got the vibe that he was a very conservative fellow.” 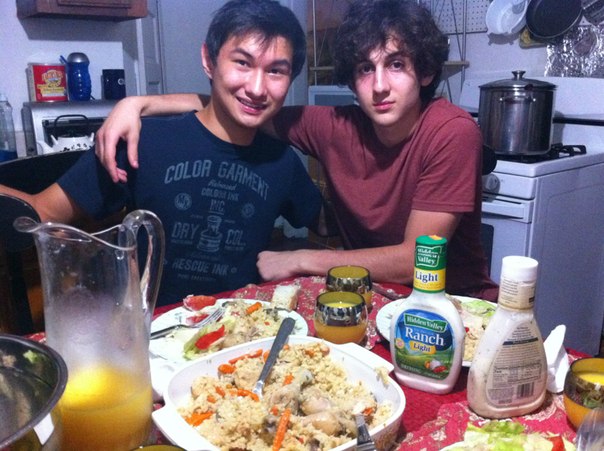 A page that appears to belong to Kadyrbayev on Vkontakte, a Russian social-media website similar to Facebook, hints at conservative views about women. Among his posts is a poem attributed to Kazakh poet Abai Qunanbaiuli that defines a good wife as smart, thrifty, and modest. Yet, that would seem at odds with several images that Kadyrbayev has also posted of scantily clad women, as well as a crude cartoon about marijuana, alcohol, and rape.

The woman recalled that when she first saw Tsarnaev’s name in the news, she didn’t recognize him because she knew him as Jahar. Later it clicked: “I remembered when we had gone up to his room, he had spent like 10 minutes explaining why his name was spelled differently.”

Could he have really been behind the marathon bombing? “I was like, there’s no way…and then I saw his face all over the news.”

She was surprised to learn about the other suspects’ alleged involvement as well. “There was no indication that they were crazy at all. They just seemed goofy, kind of lackadaisical, not interested in their studies. But, you know, whatever, it was their first semester of college. No one really cared about books.”