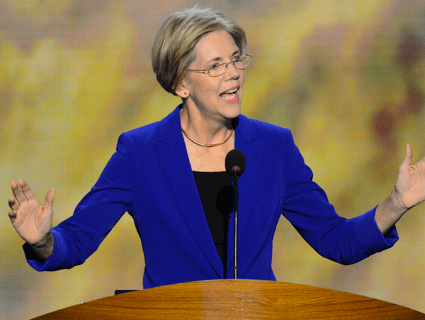 “The student loan bill passed by House Republicans takes a bad situation and makes it worse,” she said in a statement.

On July 1, rates for federal student loans called Stafford loans are set to double from the current rate of 3.4 percent to 6.8 percent. The GOP bill, which passed the House on a mostly party-line vote of 221 to 198, would allow interest rates on those loans to rise or fall from year to year with the government’s cost of borrowing, ending the system in which rates are fixed by law. Because market rates are low right now, the initial rate for those loans would be about 4.4 percent, but in coming years it could increase up to a cap of 8.5 percent.

Warren, who has proposed her own student loan plan which would cut student loan rates to near zero, accused Republican lawmakers of making students into cash cows:

Our students should not be a profit center for the government, and the July 1 deadline should not be turned into an opportunity to make more money at the expense of young Americans who are working hard to get an education. This is about our values. We should be investing in higher education to strengthen our economy and grow the middle class.

The student loan bill proposed by Warren, a version of which was introduced in the House by Rep. John Tierney (D-Mass.), is called the Bank on Students Loan Fairness Act. Under Warren and Tierney’s plan, student loan interest would be cut to the low .75 percent interest rate that banks pay to the Federal Reserve for short-term loans. After a year, a longer-term student loan solution would be drawn up.

“If we can invest in big banks by giving them low interest rates on government loans,” Warren said in the statement, “we certainly can do the same to help students get an education.”

The Republican bill faces opposition in the Democratic-controlled Senate, and President Obama has threatened to veto it.