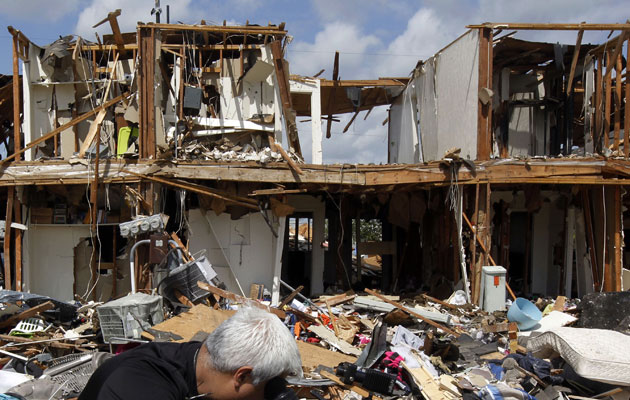 It didn’t take long in the aftermath of April’s explosion in West, Texas, for the problems with the fertilizer industry to come into focus. Inspections are virtually nonexistent; regulatory agencies don’t talk to each other; and there’s no such thing as a buffer zone when it comes to constructing plants and storage facilities in populated areas.

Lost in the fallout, though, is a damning fact: Fertilizer doesn’t have to be explosive. Pure ammonium nitrate like the kind that caused the West disaster is already banned in the United Kingdom, Germany, Colombia, the Philippines, and China, due to its explosive risk; Australia’s largest fertilizer manufacturer discontinued the use of the compound after it was used in the 2002 Bali hotel bombing. And the Department of Defense has pressured fertilizer manufacturers overseas to neutralize their own products, warning that anything less constitutes a threat to American personnel. But in the United States, with the backing of the chemical industry, explosive ammonium nitrate has held onto a small but powerful share of the market as the fertilizer of choice for citrus growers.

It wasn’t for lack of opportunity. In the late 1960s, a chemist from Kansas, Charles Saffer, and an explosives engineer, Samuel Porter, began working in their spare-time to develop an antidote to the kind of destructive devices Porter had witnessed while stationed in Somalia with the US military. Porter and Saffer secured a patent for noncombustible fertilizer that involves diluting ammonium nitrate with diammonium phosphate. Because diammonium phosphate is itself used as fertilizer, the new compound was—in theory—still an effective agricultural compound. The duo enlisted a partner, Robert Colbert, and found a lawyer: a young Louisiana attorney named Billy Tauzin.

“I remember we testified and even said that one day someone is going to take this stuff and put it in a truck and blow it up,” Tauzin recalls. But it was dead on arrival in every case. “The chemical association killed it.”

After the Oklahoma City bombings, which relied on a truck bomb filled with store-bought ammonium nitrate fertilizer, Tauzin, by then a Democratic congressman (he later switched parties, and then became a pharmaceutical lobbyist), saw an opportunity once more to neutralize the threat. But the Fertilizer Institute, the nation’s leading lobbying organization of the chemical and agricultural industries, successfully squashed all regulatory efforts. It teamed with the National Rifle Association to block a proposal mandating that “tracer” ingredients be included in the formula so that law enforcement officials might be able to track the origin of bomb-making chemicals (on the grounds that ammonium nitrate doesn’t kill people—people kill people). And at a hearing in Washington, an industry representative testified that switching to nonexplosive fertilizer would increase the cost of fertilizer by $3 per bag and contended that it would still be possible to turn the fertilizer into an explosive—it’d just have to undergo a new chemical process.

“That was the end of it,” Tauzin says. “Nothing really happened.”

The industry’s second point has some truth to it. The prohibition of explosive fertilizer in Ireland and the United Kingdom didn’t stop the Irish Republican Army from weaponizing fertilizer. But the extra legwork required serves as an extra layer of protection. “It would obviously take some level of effort,” says Kathy Mathers, a spokeswoman for the Fertilizer Institute. Case in point: When Faisal Shahzad tried to set off a car bomb in Time Square in 2010, the attempt fizzled (literally) because the fertilizer he’d purchased for his bomb was nonexplosive.

Mathers also says the Fertilizer Institute opposed Tauzin’s measure because Porter’s patent had been proven not to work. But that gets the chronology wrong: It wasn’t until after the hearing that ammonium nitrate manufacturer ICI Explosives finally tested the effectiveness of the patent, in response to a lawsuit from superlawyer Johnny Cochran.

After that, the National Academy of Sciences studied the exploding fertilizer issue and concluded in 1998 that the best approach to preventing fertilizer from being used as an explosive was on the enforcement, not production side. In other words, the solution wasn’t to change the fertilizer formula, it was to make it harder for terrorists to buy fertilizer.

Ultimately, the deaths of American service members helped force the issue. In the 2000s, improvised explosive devices emerged as the weapon of choice for insurgents in Afghanistan—many of them relying on calcium ammonium nitrate produced by the Pakistani fertilizer giant, the Fatima Group. American efforts to persuade the Pakistanis to better police their product by including tracking agents in the fertilizer (the same policy, ironically, that the NRA has consistently blocked in the United States) were unsuccessful. So they pressured Fatima to change its product instead.

Finally, in February, shortly after Indiana lawmakers tried to block a Fatima Group subsidiary from setting up in the state because of its alleged complicity in IEDs, the company announced it had developed a new, nonexplosive, calcium ammonium nitrate formula and was making it available for mass production.

American companies have slowly embraced the concept of nonexplosive fertilizer, too—with a little prodding. After 9/11, the Department of Homeland Security began offering incentives to companies that sought to neutralize the explosive properties of fertilizer, with an emphasis on domestic production. In 2008, Honeywell announced it had developed a new formula, combining ammonium nitrate and ammonium sulfate, that substantially reduced the explosive powers of its formula (you can watch of video comparison here). It produced a commercial variant three years later.

Kevin Fleming, an explosives engineer who retired from Sandia National Laboratory in February, recently developed a new form of fertilizer that he says is “damn near impossible” to turn into an explosive. (The secret: mixing the ammonium nitrate fertilizer with iron sulfate.)

American companies, in other words, are finally coming around to where their European counterparts were decades ago, and embracing the concept of nonexplosive fertilizer that Tauzin has been touting since the 1970s. But although ammonium nitrate’s share of the fertilizer market has dropped—to about 2 percent of all sales in 2010, according to the Fertilizer Institute—it’s still widely in used in Texas, California, and Florida, where it’s prized for its use in citrus fields.

“It has a good purpose not only just for its ability to grow crops, but also for when it’s growing those crops for keeping excess nutrients out of the environment,” Mathers says. “So for certain crops it is the most efficient fertilizer available.”

But as the case of West, Texas, demonstrates, that continued usage comes with a risk—one that many other countries have deemed to be too high.