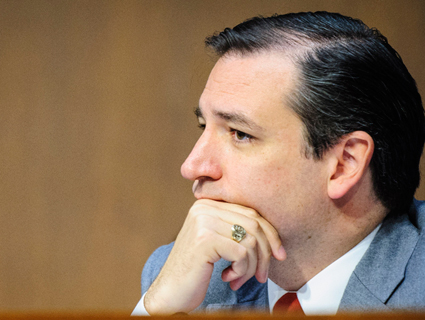 Texas GOP Sen. Ted Cruz might run for president. That’s been apparent for a while, but it was confirmed most recently on Wednesday, when the National Review‘s Bob Costa cited Cruz confidantes who believe their guy could be “a Barry Goldwater type…but with better electoral results.” The case for Cruz, according to Cruz, is that he is uniquely positioned to capture the kind of grassroots conservative activists who propelled him to victory in his 2012 Senate primary.

If nothing else, Cruz seems determined to hold onto those right-wing supporters. That might explain why, last week, he and and eight other Republican senators signed onto a letter to Secretary of Education Arne Duncan opposing the Common Core curriculum standards, which the Department of Education has been encouraging states to adopt. As I reported last month, Common Core has attracted criticism from all sides of the education debate, and for a variety of reasons. Some advocates decry the lack of flexibility it affords local school districts. Others, like Diane Ravitch, think it’s a great idea but should be purely voluntary. And still others, specifically grassroots conservative activists, believe it is nothing less than back-door brainwashing—part of a global push to indoctrinate kids into a socialist worldview. That’s the Glenn Beck view, anyway.

Cruz’s letter is comparatively tame. Put simply: He wants the Department of Education to back off. But it’s a move that’s sure to please the conservative base in the weeks and months ahead. Here’s the letter: