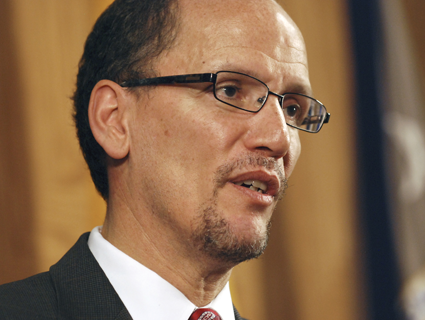 Much news has been made of the dozens of judicial slots left vacant due to the constant roadblocks set by Senate Republicans. But Republicans have also blocked or delayed an unprecedented number of cabinet-level presidential nominees during the Obama administration, including most recently labor secretary nominee Thomas Perez, the assistant attorney general for civil rights in the Justice Department, a progressive whose confirmation vote Republicans have repeatedly derailed.

“Now they’re double-teaming him,” Sen. Majority Leader Harry Reid complained during a Wednesday morning meeting with reporters at the Capitol. “They’re holding hearings in the House as to how he’s doing in his present job.”

House Republicans have scrutinized Perez’s alleged role in preventing a St. Paul housing discrimination case from reaching the Supreme Court, and his use of a personal email address to conduct official business. That, Reid said, was done “just to deflect attention from the fact that he’s being held up [in the Senate].”

To push back, Senate Democrats plan to force committee votes on three cabinet-level nominees, including Perez. Reid’s office expects Perez to be voted out of committee on Thursday, after which Reid plans to schedule a confirmation vote in the near future. Senate Democrats, including Harry Reid, have also floated the possibility of using the nuclear option, which would change Senate rules through a simple majority vote to prevent filibusters on nominees.

The only cabinet-level nominee who has arguably faced harsher resistance from Republicans was former Sen. Chuck Hagel, a Republican himself who was confirmed as secretary of defense in February after facing a filibuster unprecedented for his cabinet position.

Republicans have also been using procedural maneuvers in the Senate to block two other cabinet-level nominees: Obama fundraiser Penny Pritzker as commerce secretary, and Gina McCarthy as head of the Environmental Protection Agency.

Reid also said he planned to schedule a vote soon for Richard Cordray, an uncontroversial lower-level nominee picked to lead the Consumer Financial Protection Bureau. If Republicans block his nomination, Talking Points Memo reports, it could strengthen the case for filibuster reform.

“I’m going to make sure he’s going to have a vote next week, and we’ll see what happens after that,” Reid said of Cordray. “But my point is, this [obstruction] can’t go on. This is not good for the country.”

Earlier this year, Reid disappointed allies craving real filibuster reform when he declined to pursue major Senate rules changes. He said he has no current plans to take on filibuster reforms, such as one that would weaken Senators’ ability to block nominees, but is considering doing so “very closely” as Republicans continue to threaten filibusters against Obama nominees.

“Whether it’s Jeb Bush or Hillary Clinton that’s the next president, I don’t think they should have to go through what we’ve gone through here,” Reid said.