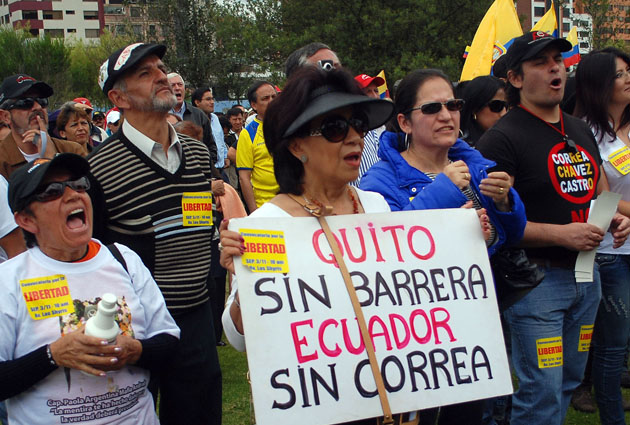 As of Monday afternoon (Eastern time), the whereabouts of on-the-run NSA leaker Edward Snowden remained unknown. But it seemed the onetime contractor might be headed to Ecuador. There’s little doubt that the country’s president, Rafael Correa, would relish the chance to welcome Snowden and irritate Washington. Correa has been a leading purveyor of anti-United States rhetoric in Latin America, reviving the down-with-gringos banner-waving once so popular in the region. But Correa’s embrace of Snowden—if it comes to be—could produce blowback for the heavy-handed Ecuadorean leader by focusing global attention on his own, far-from-laudable policies regarding transparency, press freedoms, and refugees.

Just two weeks ago, his party passed a law in the National Assembly that, according to Human Rights Watch, “undermines free speech.” HRW official José Miguel Vivanco notes, “This law is yet another effort by President Correa to go after the independent media. The provisions for censorship and criminal prosecutions of journalists are clear attempts to silence criticism.”

Here’s how HRW describes the law:

It prohibits so called “media lynching” which is defined as “the dissemination of concerted and reiterative information, either directly or by third parties, through media outlets, with the purpose of undermining the prestige” of a person or legal entity or “reducing [their] credibility.” The provision would allow the authorities to order the media outlet to issue a public apology and states that they are also subject to criminal and civil sanctions, imposed by the courts.

It requires media outlets to issue their own codes of conduct to “improve their internal practices and their communications work” based on a series of requirements such as to “respect people’s honor and reputation.” Although self-regulation of this nature is not in itself problematic, the law provides that any citizen or organization can report that a media outlet violated the requirements, and government authorities can issue a written warning, or impose sanctions.

It says that journalists must “assume the subsequent administrative consequences of disseminating content through the media that undermines constitutional rights, in particular the right to communication, and the public security of the State.” Journalists deemed to violate this responsibility could be subject to civil, criminal or other sanctions.

The law would essentially allow Correa’s government to criminalize journalism that inconveniences the president and his allies. HRW points out that human rights advocates generally oppose granting government the power to charge journalists with a crime for publishing derogatory information about public figures: “International bodies from the Inter-American, European, and United Nations human rights systems have long criticized the use of criminal charges to respond to media allegations made against public officials, as contrary to the interest of promoting vibrant public debate necessary in a democratic society.” But that’s what Correa’s party has sought to do. Vivanco puts it this way: “Giving the government the power to decide whether or not information is ‘truthful’ will open the door to unlawful censorship. This is an especially alarming provision in a country where the president has a track record of using his powers to target critics in the press.”

The law would essentially allow Ecuador to criminalize journalism that inconveniences the president and his allies.

This is not Correa’s first stab at media intimidation. In July 2011, an Ecuadorean court sentenced a reporter for El Universo, a newspaper based in Guayaquil, and three members of the paper’s board to three years in prison for defamation because the paper criticized Correa. The reporter, Emilio Palacio, had written an opinion piece that referred to the president as a “dictator” for having considered pardoning people involved in a police rebellion that included an attack on a hospital. The criminal case was triggered by a defamation suit filed by Correa.

With the suit and the recent law, Correa has shown he’s no fan of a free media and a vibrant national debate—at least not when he and his actions might be the focus. In its most recent ranking of international press freedoms, Reporters Without Borders scored Ecuador toward the bottom: “Ecuador fell 15 places to 119th after a year of extreme tension between the government and leading privately-owned media.” In its annual report on Ecuador, Amnesty International notes that “there were concerns that laws dealing with the crime of insult were being used against journalists in violation of the right to freedom of expression and could deter other critics of government authorities from speaking out” and that “indigenous and community leaders faced spurious criminal charges aimed at restricting their freedom of assembly.” And HRW has also assailed Correa for not respecting the due process rights of asylum seekers. (Snowden’s standing as a persecuted refugee is far from certain.)

Correa might boost his anti-Yankee creed by sheltering Snowden and seek to portray himself as a protector of the persecuted. “Human rights will take precedence over any other interests or pressure that some might want to exert,” Ecuador Foreign Minister Ricardo Patiño said on Monday regarding the possibility Snowden would find asylum in Ecuador. But by bear-hugging Snowden, Correa would draw attention to his own history of opposing a robust press that dares to challenge the powers that be.

CLARIFICATION: This piece neglected to report that Correa eventually pardoned Palacio and the three other journalists. But he was unrepentant about having pursued the case. At the time of the pardons, Reuters reported Correa said, “They have been talking about a dictatorship and they were right because there’s a dictatorship and there’s a government that has been fighting that dictatorship, the dictatorship of the media.” The news service also noted, “The Miami-based Inter American Press Association said media freedom was still under attack in Ecuador regardless of Correa’s decision.”