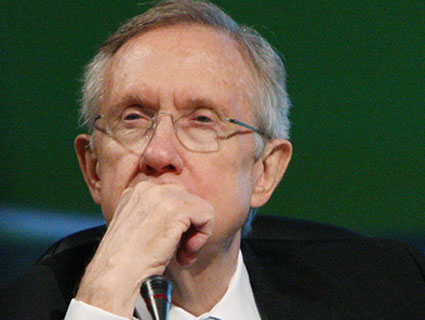 Senate Majority Leader Harry Reid (D-Nev.) has called an amendment floated by Sen. John Cornyn (R-Texas) a “poison pill” that, if passed, could kill the immigration bill. Nevertheless, Reid will allow the controversial border security measure, which Sen. Marco Rubio (R-Fla.) recently called “very reasonable,” to come to a floor vote as early as Wednesday before he moves to end debate and bring the full bill to a vote.

Cornyn’s amendment would require the implementation of four security measures before immigrants could be granted permanent legal status: complete surveillance of the southern border, a 90 percent apprehension success rate for people who cross the border illegally, a mandatory national E-Verify system, and an operational biometrics security system—typically fingerprint identification—at United States air and sea ports. The amendment is strongly opposed by Democrats, as well as some Republicans, who say it would be overly expensive and logistically difficult to implement, and would therefore effectively cripple the 13-year path to citizenship that is the centerpiece of the Senate bill.

“If [the Gang of Eight doesn’t] take reasonable measures to deal with the border security concerns of the American people, I don’t think we’re going to get an immigration bill,” Cornyn told reporters Tuesday afternoon. “So that itself will be a poison pill.” Reid said Tuesday that he believed the bill, as currently written, already has enough votes to surmount a filibuster. However, the Gang of Eight wants the bill to pass with at least 70 votes to put pressure on the GOP-led House to take action.

The current Senate bill already calls for round-the-clock surveillance of the southern border, a 90 percent apprehension rate within five years, and a mandatory E-Verify system. But those measures don’t serve as triggers that would preclude immigrants from getting legal status before they are implemented. Republicans have clamored for triggers as part of a broader bipartisan compromise, although the conservative Heritage Foundation has come out strongly against Cornyn’s amendment, calling it a “fig leaf” that still puts legal status first and foremost.

“Trust but Verify” is also the name of a Reagan-inspired amendment authored by Sen. Rand Paul (R-Ky.) that would require the Department of Homeland Security to provide annual reports to Congress to show that the border is “provably secure” before undocumented immigrants would be given provisional legal status. Paul’s amendment is one of nine other amendments that will likely get a vote Wednesday. Both Cornyn and Paul have expressed some willingness to work toward a broader compromise, although many Democrats think Cornyn has been insincere.