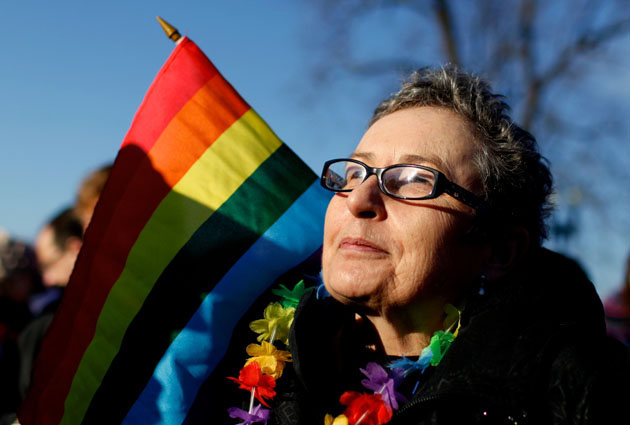 In a pair of decisions on Wednesday, the Supreme Court handed marriage equality supporters major victories, striking down the federal Defense of Marriage Act and paving the way for same-sex marriages to resume in California.

The 5-4 decision in the DOMA case deemed the 17-year-old measure that President Bill Clinton signed into law unconstitutional because it denies equal protection rights to same-sex couples who are legally married under state law. The case, Windsor v. United States, involved Edith Windsor, a lesbian whose partner of 40 years died in 2009. Under DOMA, the federal government didn’t recognize their marriage, which meant Windsor was unable to claim tax benefits provided to heterosexual couples and was left with a large estate tax bill. (See Adam Serwer’s explanation of the case.)

“DOMA contrives to deprive some couples married under the laws of their State, but not other couples, of both rights and responsibilities,” Justice Anthony Kennedy declared in the majority opinion.

In a ruling joined by Justices Ruth Bader Ginsburg, Elena Kagan, Sonia Sotomayor, and Stephen Breyer, Kennedy concluded, “The federal statute is invalid, for no legitimate purpose overcomes the purpose and effect to disparage and injure those whom the State, by its marriage laws, sought to protect in personhood and dignity. By seeking to displace this protection and treating those persons as living in marriages less respected than others, the federal statute is in violation of the Fifth Amendment.” In other words, Kennedy et. al. were proclaiming the federal government cannot justify an action that discriminates and DOMA was an act of discrimination.

Wednesday’s ruling means that same-sex couples that are legally married under state law will enjoy the same federal benefits as heterosexual couples when it comes to taxes, pensions, and other matters. “DOMA divests married same-sex couples of the duties and responsibilities that are an essential part of married life and that they in most cases would be honored to accept were DOMA not in force,” Kennedy wrote. “Under DOMA, same-sex married couples have their lives burdened, by reason of government decree, in visible and public ways. By its great reach, DOMA touches many aspects of married and family life, from the mundane to the profound.”

The second case dealt with California’s Proposition 8, a ballot measure passed in 2008 banning gay marriage after the state’s Supreme Court legalized it. A federal appeals court decided last year that the law violated the 14th Amendment. Gay marriage foes appealed the decision to the US Supreme Court. And with a decision written by Chief Justice John Roberts—and not supported by Kennedy—the court, in another 5-4 split, today ruled that the marriage equality opponents in California did not have legal standing to appeal the decision. That kicks the case back to a lower court that has already said same-sex marriages should be legal. This case had provided an opportunity for the court to rule more broadly on the question of gay marriage, but the high court declined to do so.

The two historic decisions provide significant momentum for gay marriage advocates, as they continue to gain ground in legalizing same-sex marriage in states around the country. Since Massachusetts legalized same-sex marriage in 2004, 11 other states and the District of Columbia have followed suit. Last November, Maryland, Maine, and Washington approved ballot measures legalizing gay marriage. Last month, Minnesota’s Legislature approved a marriage law. No doubt, at some point, the fundamental question of the right of same-sex couples to be married will reach the Supreme Court. But for now, this court—generally a conservative court—has helped propel the marriage equality movement.

For more background on the cases, see our explainer. The Washington Post also has a good interactive chart on how these decisions will affect the states.