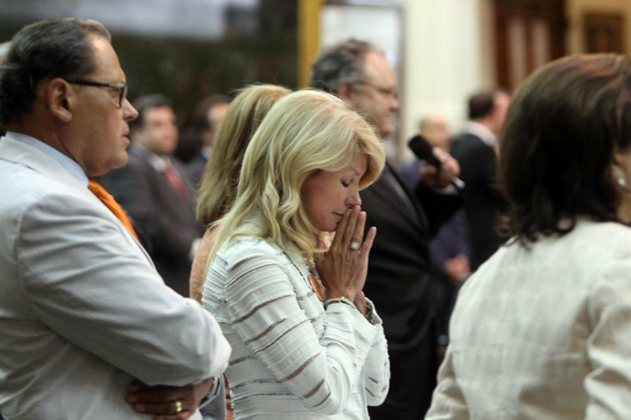 Update, 5:22 PM EDT: A spokeswoman for Gov. Perry confirmed to Mother Jones that he has called a special session that will begin on July 1. Perry said in a statement, “I am calling the Legislature back into session because too much important work remains undone for the people of Texas. Through their duly elected representatives, the citizens of our state have made crystal clear their priorities for our great state. Texans value life and want to protect women and the unborn.”

Donning pink tennis shoes, Texas state Sen. Wendy Davis (D-Forth Worth) waged an almost 11-hour filibuster Tuesday to thwart a GOP-backed bill that would have shuttered most of the abortion clinics across Texas. The bill was killed, despite efforts by Texas Republicans to throw the rule book at Davis for adjusting her back brace. GOPers also staged a vote approving the bill minutes after deadline, but the vote was too late and didn’t count. But Republicans are not accepting defeat, and an expert on Texas electoral law says the state’s GOPers know that Texas Gov. Rick Perry still has an opportunity to put an identical anti-abortion bill to the floor, in another special session that could be held any time. If that happens, even a state senator as heroic and unwilling to sit down as Davis might not be able to stop the bill from passing.

Mark Jones, a political science professor at Rice University, says, “Republican Senate leaders realized they were on very shaky legal ground” when they declared victory on Senate Bill 5 a couple minutes after midnight—going so far as to change the time stamp on the Legislature’s official web page. “The practical route for them to follow is recognize defeat here, and focus on getting identical legislation passed in the second special session where time will not be an issue like in the first…Davis would need to filibuster for two weeks.”

Here’s how it works: Under Texas law, the governor can call as many “special” 30-day voting sessions as he wants, to deal with one or more specific pieces of legislation of his or her choosing. During these special sessions, only a simple majority is needed to put a bill to vote, instead of the more commonly used two-thirds majority. The two-thirds rule, as Jones explains, generally “keeps the GOP from moving too far to the right” during the regular voting process.

In the special session that just ended, the abortion bill did not reach the state Senate floor until the final day, thanks to stalling maneuvers mounted by Texas Democrats. This meant that Davis only had to filibuster the session for the final 11 hours of the session it took to kill the bill. But Jones predicts that an identical bill introduced in a new special session would have more than enough support to pass in the state House and Senate. And it could hit the Senate floor weeks before the session ends. With the Legislature’s tough rules about filibusters—a lawmaker using that tactic must remain standing and on-topic, and resist the urge to go to the bathroom—it would be impossible for a person to filibuster the measure for that long. Jones says that he expects Perry to call another special session to deal with the controversial abortion bill: “I therefore expect legislation similar to SB 5, though perhaps with some modifications, to reach Gov. Perry’s desk in July.” Perry’s office did not respond to a request from Mother Jones on whether he plans to call another session.

Senate Bill 5 proposed some of the most severe abortion restrictions in the United States—it would have banned abortions after 20 weeks gestation, even in cases of rape and incest, and created strict new building codes for abortion clinics that threaten to shut down nearly all of the state’s providers. If Perry introduces a similar bill, it will likely galvanize Davis’ supporters—who chanted so loudly at the end of her filibuster that Lt. Gov. David Dewhurst accused them of “using Occupy Wall Street tactics.” During Davis’ filibuster, Republicans attempted to disqualify her both for adjusting her back brace—the way Texas law is written, a disabled person wouldn’t be able to filibuster—and for going off topic by discussing sonogram legislation as it relates to the abortion debate.

For now, pro-choice advocates are celebrating Davis’ victory and taking a wait-and-see-approach. “What has happened here in Texas over the course of the last week is nothing short of remarkable,” says Cecile Richards, president of the Planned Parenthood Action Fund. “Facing near-impossible odds, thousands of Texans descended on Austin to make their voices heard—telling their legislators that they would not stand for legislation that would hurt thousands of women and essentially end access to safe, legal abortion. [Last night], Texans won.”

As for what might happen in another special session, Amanda Harrington, a spokeswoman for the Planned Parenthood Action Fund says, “Stay tuned—all I can say at this point!”