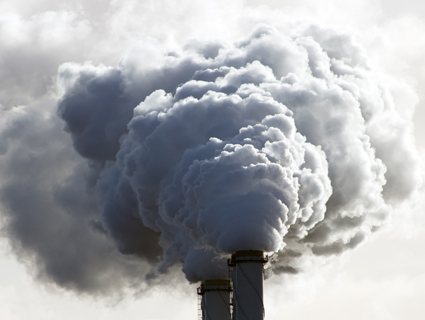 The coal industry is worried about environmental threats. Not threats like climate change, superstorms, or wildfires. Threats posed by environmentalists.

In May, the American Coal Council—an industry group whose membership includes the biggest coal producers and consumers in the US—hosted a webinar called “What Environmental Activists Are Planning for Coal in 2013.” As the invitation put it, “Using social media and community organization tactics, these groups are savvy, motivated and may be off your radar.” The industry has begun to refer to this kind of strategy as a “war on coal” that aims to stop pollution from coal-fired power plants.

Meredith Xcelerated Marketing, a New York-based marketing firm that works with businesses like Kraft Foods, Coca-Cola, and Bank of America, put together the presentation on the “environmental threats” posed by groups like 350.org, Sierra Club, and Organizing for America (the activist group spun off from Obama’s election campaign). Mother Jones obtained a copy of their slideshow. Using newspaper headlines and promotional materials from environmental groups, MXM’s presentation points out all the ways environmental activists have found success in taking on coal. 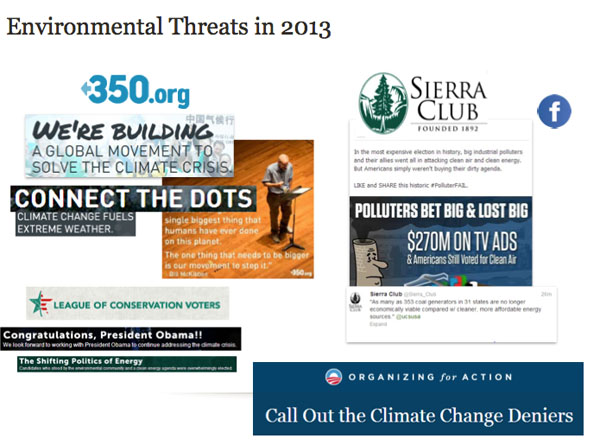 One slide points out the “strength in the environmental narrative” and lists headlines from stories on the decline of coal and the rise of renewables. 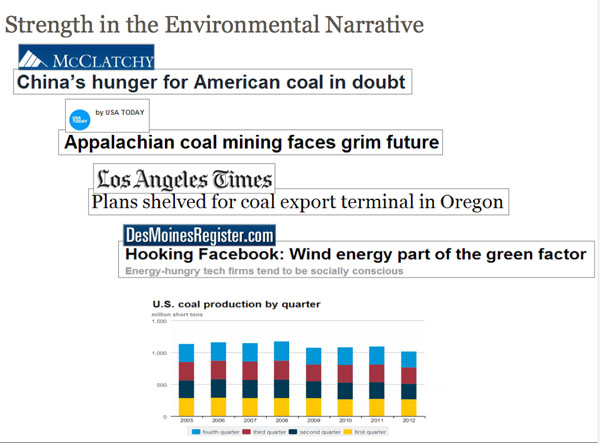 The next slide notes enviros’ “ability to drive national attention.” Another slide notes that recent efforts to get universities to divest from fossil fuels are “a potent form of publicity.” 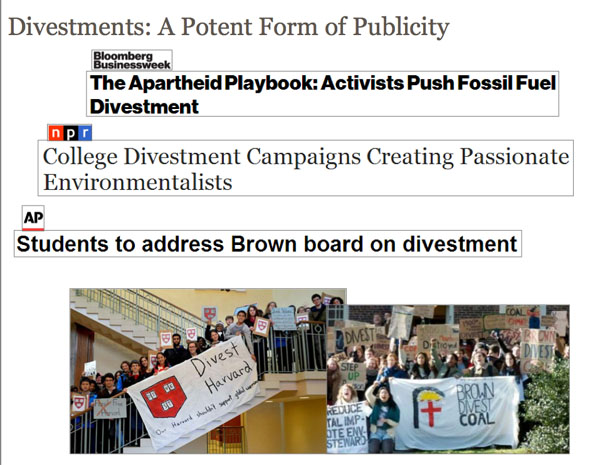 Ross Parman, who put the presentation together, told Mother Jones by email that MXM doesn’t do work for ACC; he just put this presentation together for the council. “I was asked to pull together this really top-level overview of some of the messaging and specific campaigns that have targeted the coal industry,” said Parman. “The presentation wasn’t intended to focus on environmental activists or messaging about climate change, just the campaigns and messages from 10,000 feet.”

What’s interesting about this is that it shows that anti-coal activists are winning—and that the coal industry is worried. The industry has used the allegation that government regulators and environmentalists are waging a “war on coal” to fight off any and all attempts to curb emissions from coal-fired power plants. But it’s not working.

Luke Popovich, the vice president for communications at the National Mining Association, penned an op-ed in the industry magazine Coal Age on a recent court decision upholding the EPA’s regulatory authority on Clean Water Act permits that noted as much. “Anyway, ‘war on coal’ never resonated with much conviction among ordinary Americans,” he wrote. “For them, the EPA keeps the air and water clean, their kids safe.”

But Popovich’s piece, as Ken Ward at the Charleston Gazette pointed out last month, goes on to call for a doubling down on the rhetorical strategy.

And then, when President Obama announced his climate plan last week, the industry and its allies in Congress, launched into the “war on coal” cries once again. I guess some people never learn.