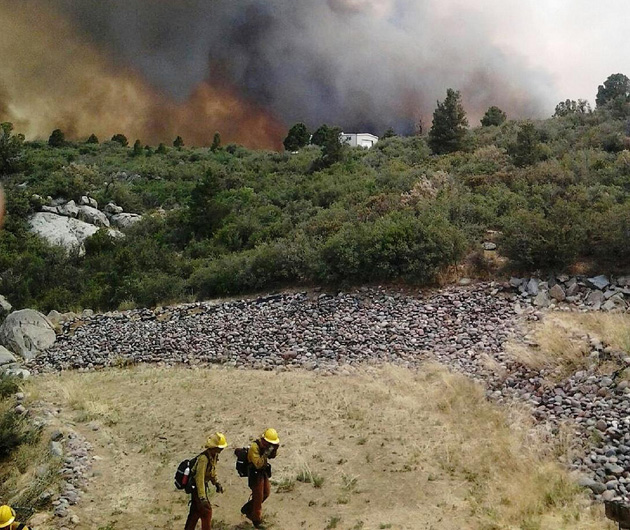 In the wake of the tragic news that 19 heroic members of an elite “Hotshot” firefighting team were killed in Arizona, there’s been renewed discussion about climate change and how it is worsening wildfires. In particular, there’s considerable evidence that western fire seasons are getting longer and more destructive, and that this is tied to more extreme heat and drought.

But does the same dynamic make the act of wildland firefighting riskier? There are reasons to suspect that it does.

Nick Sundt is a former western smoke jumper—a firefighter who literally parachutes in to combat blazes, often in remote locations, acting as a kind of first line of defense. He fought fires from Alaska to New Mexico for a decade during the 1980s. Now, he’s the communications director for climate change at the World Wildlife Fund. No wonder that he has focused much of his attention of late on how Western fires, and conditions for his fellow firefighters, are getting worse.

Federal and state “HotShot” crews, explains Sundt, are composed of highly trained specialists who are at the top of their physical game—for instance, they have to be able to hike three miles in 45 minutes carrying a 45 pound pack. They are dispatched to fight fires that grow beyond the capacity of first arrivers—such as smokejumpers—to combat. What follows is often intense, dangerous labor for 16 hours at a time or even longer.

As Sundt explains, members of these teams are “arguably the most physically fit and well organized crews of firefighters” that governments have at their disposal. But that doesn’t mean that they’re ready for every situation.

In the case of the Arizona team, the emergency shelters that Hotshots take with them—to protect from heat, and preserve oxygen—appear to have been insufficient, for unknown reasons. Such shelters, it is important to note, are not able to resist direct exposure to flames.

With fire dynamics changing and overall temperatures rising, meanwhile, even the best prepared firefighters may be facing greater risks.

The first such risk involves a well-documented increase in average temperatures in fire-prone regions—punctuated by heat waves of the sort now underway in the West. Extreme heat is of course a physical danger in and of itself (for a video on heat risks to firefighters, see here or below), as well as a major stressor for firefighters who are often operating in intense conditions, with little sleep for days on end—all the while wearing heavy equipment and carrying gear, tools, and water. “I’ve fought fire in the Mojave Desert in 100 plus temperatures, and you grab a drink, it’s like drinking hot tea out of your canteen,” says Sundt.

What’s more, these hotter temperatures make it harder for crews to sleep. Firefighters often work at night, according to Sundt, when weather conditions are more favorable. That means they have to go back to camp and try to sleep during the hottest hours of the day. Meanwhile, even the night shifts aren’t as cool as they used to be. The ‘C-N-A Crew’ would help us do our work at night,” Sundt says—explaining that “C-N-A” stands for “cool night air.” But nighttime average temperatures are also rising. That means fires are more likely to be active, and firefighters less likely to get a reprieve.

The other new risk to firefighters? Simply that they’re tangling with a different beast than they may be used to. “Many firefighters have commented that they are facing more extreme fire behavior than they have witnessed in their lifetimes,” remarked Dr. Michael Medler, a former wildland firefighter and now a professor at Western Washington University, in 2007 congressional testimony. If fires are behaving in different ways than expected—if they’re larger, if they’re unusually severe—that’s an added risk. Longer fire seasons also expose more firefighters to more potential hazards in general. (For more on how wildfires are changing see our explainer here.)

That’s not to say that climate change is the only factor making wildfires worse or seemingly more destructive. Increased development in fire prone areas is also at play, as are questionable past “fire suppression” practices. But we can’t ignore the climate factor.