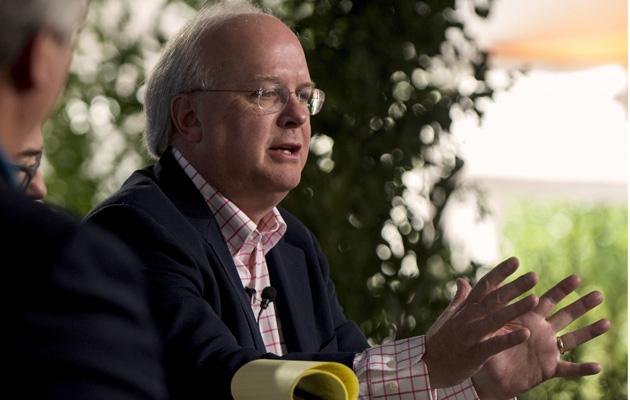 Groundswell, the recently created coalition of prominent right-wing activists and journalists, gathers weekly to coordinate messaging and plot strategy for “a 30 front war seeking to fundamentally transform the nation.” These sessions usually fixate on how best to battle the president, congressional Democrats, and progressive groups. But their 30-front war also includes something of a civil war: a fierce crusade against the Republican establishment and Karl Rove, the GOP strategist and Fox News pundit.

Rove is a regular topic of discussion—and frustration—at Groundswell’s Wednesday morning meetings, according to the documents obtained by Mother Jones. At these sessions, and in messages shared by participants on Groundswell’s Google group page, Groundswellers often gripe that the GOP’s inside-the-Beltway crowd wants to marginalize the party’s ideological die-hards and recruit, promote, and support political candidates deemed less strident and more electable. Rove especially ticked off tea-party-minded conservatives in February when the super-PAC he advises, American Crossroads, announced it was launching the Conservative Victory Project, which would try to block far-right candidates from blowing key races, as Missouri’s Todd Akin and Indiana’s Richard Mourdock did in Senate contests last year.

Yet as Rove kicked off this project, Groundswellers, in closed-doors meetings, initiated an effort to crush Rove, who they believed had helped shape a post-election post-mortem by the Republican National Committee that called on the party to temper its message to appeal to a broader swath of voters.

At the group’s March 20 meeting, Groundswell participants reviewed the details of this vigorous anti-Rove endeavor, according to notes prepared after the session. This memo referred to a “two front war” to tear down the prominent GOP strategist who engineered the political triumphs of George W. Bush. Under the subject head “ROVE PROJECT,” the memo reported:

Rove is still actively networking and building his financial capabilities, an indication that we are not yet being effective. His associates have quietly contributed to the drafting of the RNC document, Autopsy. The Autopsy Report…has drawn fire from the Tea Party, social conservatives and conservatives in general. It undermines the RNC platform…

The Two Front War: The two front war covers finances and reputation. Rove has relationships built over the last two decades. He must become toxic among the grass roots and among his base. His effectiveness has been called into question on Sunday talk shows and at CPAC. Regarding financing, the donors to his Crossroads [super-PAC] are public. They must be educated to the fact, Rove is not a conservative and his efforts are not effective.

Rove’s position as party spokesperson was established as a result of the Bush election. Rove gained the title and the credit for being the “great architect.” Fox has given Rove a platform and just renewed his contract. In truth, Rove no more represents conservatives then Jessie Jackson or Al Sharpton represent all Blacks.

The memo cautioned that smashing Rove would take time: “Rove has been building his power base for decades. Change requires time and patience.” It suggested “powerful messaging points” to use against him: “Rove does not speak for GOP like Sharpton does not speak for black community” and “Who put you in charge?”

“Rove has relationships built over the last two decades. He must become toxic among the grass roots and among his base.”

The Rove Project was a key agenda item at other Groundswell get-togethers. At a February 20 meeting, Groundswell participants talked about how best to “continue efforts to educate conservatives to this real and present danger to our future success”—meaning Rove—and attendees were informed that Ken Blackwell, a former Ohio secretary of state now affiliated with the Family Research Council, was identifying donors to conservative causes who “need specific attention.” That is, Blackwell was compiling a list of conservative funders to pressure to boycott Rove.

During a March 6 meeting, it was announced that the Rove Project would be one of Groundswell’s 10 working groups. (Others included national security, messaging, ground game, immigration, and Benghazi.) Sandy Rios, a fellow Fox News contributor, was put in charge of the campaign to discredit Rove. Weeks later, though, a Groundswell memo noted that the Conservative Action Project—a coalition of more than 100 right-wing organizations that is chaired by former Attorney General Edwin Meese—would be “taking the lead” on the Rove Project.

Rove did not respond to a request for comment. Neither did Virginia “Ginni” Thomas, one of the leading members of Groundswell and the wife of Supreme Court Justice Clarence Thomas.

Through Groundswell’s Google group, members were asked in February to sign a letter organized by Diana Banister, a Groundsweller and a partner at the Shirley & Banister PR firm, demanding the firing of Jonathan Collegio, American Crossroads’ communications director. Collegio’s sin: He had called Brent Bozell, a conservative media critic, a “hater” in an interview. (Collegio had been reacting to Bozell’s attack on Rove’s plan to oppose unelectable conservative Republican candidates.) The letter, addressed to American Crossroads president Steven Law, proclaimed, “You obviously mean to have a war with conservatives and the Tea Party.”

The Groundswellers certainly seem to believe they are engaged in all-out combat with Rove and GOP insiders. In February, Blackwell posted an article on Groundswell’s Google group page and stated, “War has been declared on the conservative movement.” The article was about Rove’s effort to back credible GOP candidates.