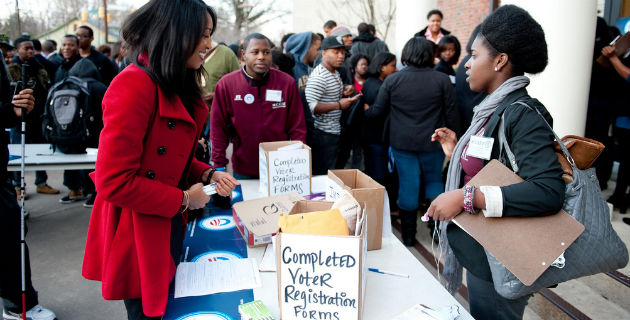 An Obama for America voter registration drive at North Carolina Central University in 2012 <a href="http://www.flickr.com/photos/94975828@N00/6774969756/in/photolist-bjFuto-aJbnyZ-dmaQmj-dntomG-dcKgaN-cT3GRS-drgiGX-cCnRbG-e35qno-deAe9f-deAfPt-deAfN2-cXm3s7-dck55S-dck4dZ-dck4hB-bfpJAB-bsMMYX-bmRiE7-dAdQTZ-cVUhqW-bm2TW8-atEvwD-ccUzX9-aQsNiz-dnR82n-9Vpuy2-cSeGMA-aiV2kn-cT3GRL-bTSvun-daL1sB-csfAFm-d7Bwcm-9TGnXY-9TDxWg-9TGnZd-9TGnW9-df4Bnt">Christopher Diltz for Obama for America</a>/Flickr

For decades, the Voting Rights Act of 1965 required cities, counties and states with histories of discriminatory voting laws to seek federal permission—preclearance, in legal parlance—before changing their election rules. When the Supreme Court invalidated part of the VRA last month, that all changed. The high court’s decision made it easier for jurisdictions with troubled pasts to enact restrictive voting laws. Now North Carolina is set to do just that.

North Carolina’s GOP-led legislature has taken many controversial steps in recent weeks—sneaking anti-abortion measures into a motorcycle safety law and cutting unemployment benefits for 70,000 North Carolinians, to name two. But new revisions (pdf) to a photo ID voting bill, which passed the House in April and is up for a Senate vote today, might take the cake. The revised bill prohibits same-day registration, ends pre-registration for 16- and 17-year-olds, eliminates one week of early voting, prevents counties from extending voting hours due to long lines (often caused by cuts in early voting) or other extraordinary circumstances, scratches college ID cards and other forms of identification from the very short list of acceptable state-issued photo IDs, and outlaws certain types of voter registration drives.

“The list of acceptable identification has been whittled away to such a small list, and that’s really what makes it so repressive,” she says. “The list is so small that many, many people in North Carolina aren’t going to have an acceptable ID.”

The bill’s new provisions make it so that, with very few exceptions, a voter needs a valid in-state DMV-issued driver’s license or non-driver’s ID card, a US Military ID card, a veteran’s ID card or a US passport. According to an April 2013 analysis (pdf) of state Board of Elections data by Democracy North Carolina, 34 percent of the state’s registered black voters, the overwhelming majority of whom vote Democrat, do not have state-issued photo ID. The same study found that 55 percent of North Carolina Democrats don’t have state-issued photo ID. Only 21 percent of Republicans have the same problem.

But ask the bill’s Republican proponents, and they’ll say that this isn’t a partisan ploy to suppress voter turnout. It’s all about fraud.

The problem with the GOP’s argument is that this voter fraud crisis is largely a figment of the right’s imagination—or a convenient exaggeration. A Democratic analysis of the last six state elections found just two instances of in-person voter fraud.

Section 5 of the Voting Rights Act used to provide a check on certain jurisdictions—including 40 in North Carolina—that wanted to change election rules. If they wanted to get voting changes approved by the feds, state legislators presiding over Section 5 districts had to structure new laws so they wouldn’t hinder the voting rights of any specific group. If the state legislators passed discriminatory laws, the Justice Department would strike them down and the legislators would have to go back to the drawing board.

With the VRA gutted, it’s open season, Leiberman says: “Unfortunately, I think that states around the country are looking at North Carolina right now—particularly those former Section 5 states—to see just how brazen they can be.”