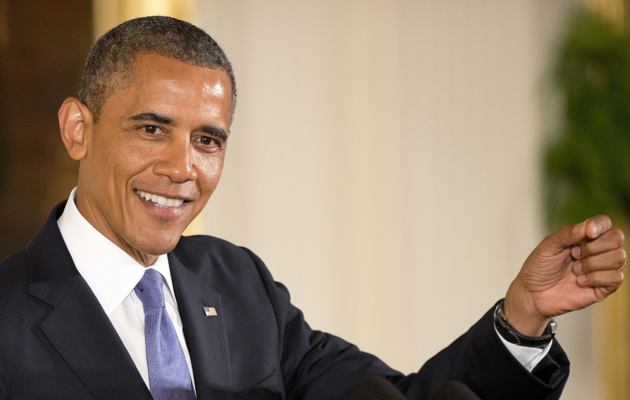 There are a mere 80 days left until one of the main components of Obamacare goes into effect. The health insurance exchanges—where uninsured Americans will be able to buy health coverage with federal subsidies—open up for business on October 1. Naysayers are predicting delays and confusion. And not without reason. According to a June survey, 79 percent of Americans haven’t heard of the exchanges. (Forty-two percent are still unsure if Obamacare is even law.) GOPers spreading misinformation about the law have outspent proponents by a factor of five. The administration is altering provisions of the law as it unfolds, even as Congress blocks efforts to improve it. Needless to say, the Obama administration has some work to do in the next couple of months to convince the American public that it is up to the task of signing up millions of people for coverage over the next year. As part of that effort, the White House held a press briefing with liberal reporters on Friday to advertise the fact that, despite all the gloom and doom, those insurance exchanges are ready to go, and darnit, people are going to like them. Here’s how that will work, according to several senior administration officials:

First of all, it’s no big thing: The insurance exchange roll-out has been portrayed as a gargantuan task, requiring the Department of Health and Human Services to coordinate 50 separate exchanges, and craft an entirely new online marketplace. But the administration insists the infrastructure for signing all these people up already exists: more people signed up for Medicare part D under President Bush II than will ever enroll in the exchanges. And out of the 30 million uninsured Americans, only 15.4 million will be purchasing coverage on the individual market through the exchanges. Out of these people, the officials say, the administration really only needs to worry about signing up a good proportion of young and healthy folks—or 2.7 million 18 to 35 year-olds—so premiums won’t be too expensive.

Micro-targeting will win again: This target group is mostly male, mostly minority, and mostly concentrated in urban areas, according to Census data. In order to sign up these Americans, the administration is deploying the same kinds of micro-targeting techniques it relied on during the re-election campaign—advertising through radio, social media, churches, community health centers, and retailers. Every Walgreens will distribute info on the healthcare law. The administration has also been working with women’s networks and magazines, like Cosmo, to promote Obamacare.

The application process won’t be terrible: The administration has already set up healthcare.gov, where uninsured people will be able to apply for and buy insurance. The application was recently cut down from 23 pages to 3, and, officials say, you won’t have to fill out any annoying questions about your migraines or your paternal grandmother’s history of heart disease that private companies use to jack up rates. Once you fill out the online app, you’ll find out if you’re eligible for Medicaid, or whether you should buy through the marketplace, and, if so, whether you’re eligible for a subsidy.

Those states that are not expanding Medicaid might come around: Obamacare broadened Medicaid eligibility to all people within 138 percent of the poverty line, but last year, the Supreme Court made that part of the law optional, and so far 17 states have refused to expand the program. Poor people filling out apps in states that are not expanding Medicaid will still be directed to the state Medicaid office, who will then have to inform the uninsured person that the state will not provide her insurance because the governor (or state legislature) decided he didn’t want to. Administration officials are hopeful that public dismay at this kind of in-your-face rejection—along with pressure from mayors nationwide who are fans of the expansion—could lead recalcitrant states to change their minds.