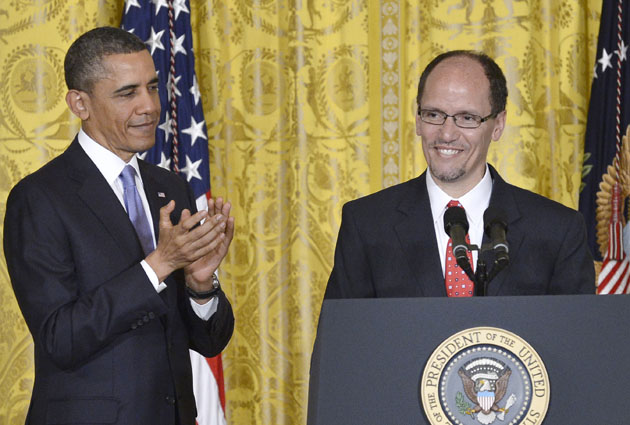 On Thursday afternoon Tom Perez, Assistant Attorney General for Civil Rights at the Justice Department, was confirmed 54-46 to head the Department of Labor after months of Republican attempts to sink his nomination. Perez’s confirmation was secured, along with four other long languishing nominees, as part of a deal brokered earlier this week by Senate Majority Leader Harry Reid as an alternative to reforming the filibuster rules that have been used to waylay votes on key agency heads. But the confirmation of Perez, which Republicans had fought tooth and nail, might be the biggest win for progressives.

As my former colleague Adam Serwer wrote back in March, when the fight over Perez’s nomination was just getting underway, spearheaded by Sen Chuck Grassley (R-Iowa), Perez is poised to be “one of the most effective and progressive senior administration officials to [Obama’s] cabinet.” As Adam wrote at the time:

When Perez was nominated to head the Department of Justice’s civil rights division, some congressional Republicans sought to block his confirmation over since discredited allegations regarding a voter intimidation case involving the New Black Panther Party and Perez’s advocacy on behalf of undocumented immigrants. During the Bush years, the division had been marred by partisan politics and declining civil rights enforcement. But since Perez took the helm, the division has blocked partisan voting schemes, cracked down on police brutality, protected gay and lesbian students from harassment, sued anti-immigrant Arizona sheriff Joe Arpaio for racial profiling, stood up against Islamophobia, and forced the two largest fair-housing settlements in history from banks that discriminated against minority homeowners…

Before Perez ran the civil rights division, he was chosen by Maryland Gov. Martin O’Malley to head the state’s Department of Labor, Licensing, and Regulation. In this position, he earned plaudits from unions for taking a hard line against employers who were dodging overtime pay, benefits, and taxes by classifying employees as independent contractors. “They were basically cheating their workers out of payment and other benefits to which they’re entitled,” says Lynn Rhinehart, general counsel at the AFL-CIO. Some of the workers classified as “contractors” were doing dangerous work, such as construction, yet because they were not employees, they could be denied worker’s compensation if injured on the job. Perez pushed for new state legislation to eliminate the practice by imposing stiff penalties on employers who break the law. The bill was signed into law by O’Malley in 2009. Fred Mason, head of the Maryland branch of the AFL-CIO, praised Perez’s “tenacity” in helping to get the new rules passed. “This is someone who understands the relationship between worker rights and human rights,” he says.

Immigration reform advocates have high hopes for Perez, the child of exiles from the Dominican Republic. Gustavo Torres, head of the immigrant advocacy organization CASA de Maryland, told Mother Jones last year that while serving on the group’s board, Perez played a key role in turning the organization into an influential force. “We were a very small organization; we were dreaming of how we could make a difference,” Torres said. Perez “helped us develop a strategic plan to expand the organization around the state.” Perez, Torres said, “truly believes in integrating the immigrant community, and believes in comprehensive immigration reform.”

The deal negotiated by Reid earlier this week also scored votes on Richard Cordray to head the Consumer Financial Protection Bureau (CFPB), Gina McCarthy for the Environmental Protection Agency, Fred Hochberg for the Export-Import Bank, and current National Labor Relations Board chairman Mark Gaston Pearce, all of which have had the votes to pass by majority, but had been waylaid by Republican filibuster. The whole compromise was a serious win for the Obama administration, which had seen 16 of its nominations for executive-branch positions blocked by filibuster, but Perez’s role as an unapologetic advocate for civil rights who’s fought police brutality, voter suppression, racial profiling, and discriminatory lending practices makes this victory particularly sweet.