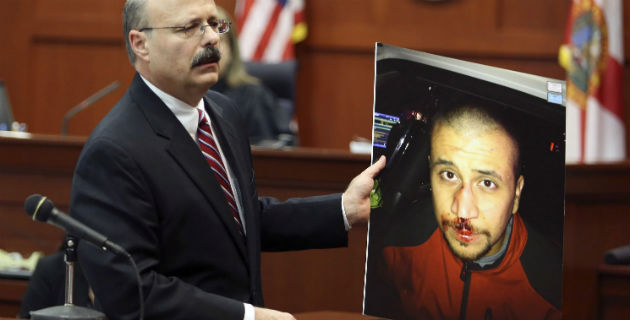 Self-defense or murder? George Zimmerman’s trial is coming to a close after more than three weeks of testimony, and it soon goes to the jury for a decision. While the prosecution has sought to prove that the self-styled neighborhood watchman stalked 17-year-old Trayvon Martin inside a Florida gated community and started a confrontation that ultimately led to Martin’s death, the defense claims that Zimmerman was a victim who killed Martin to save himself after the teen attacked him.

Although the case provoked a national uproar in early 2012 over issues of race and racial profiling—Martin was an unarmed black teen returning from a trip to a convenience store when he was killed—the trial this summer saw very little overt mention of race, and that’s not what it’s really about. Here are five key points the jury will have to decide on:

Did Zimmerman want to shoot Martin?
In his opening statement, prosecutor John Guy said, “We are confident that at the end of this trial you will know in your head, in your heart, in your stomach that George Zimmerman did not shoot Trayvon Martin because he had to. He shot him for the worst of all reasons, because he wanted to.” The prosecution pointed to a quote from Zimmerman during his 911 call that night as proof that Zimmerman did not act in self-defense. “Fucking punks,” Zimmerman told the operator, “these assholes, they always get away.” The prosecution’s star witness, Rachel Jeantel, was on the phone with Martin prior to the confrontation and testified that the teen was scared and confused as to why Zimmerman was following him. A controversial witness, Jeantel was discovered to have lied several times prior to the trial, which the defense used to try to discredit her.

Who was on top when the shots were fired?
Zimmerman claims that before shot he Martin, the teen had overpowered him with the “ground and pound” move, straddling him and showering him with punches. A defense witness, Zimmerman’s neighbor, corroborated his version of the story, while another neighbor testified that Zimmerman was on top during the fight. A gun expert testified for the defense that the gun was just inches from Martin’s body when he was shot, as opposed to Martin being farther away or on the ground, although the expert conceded that Martin could have been shot while pulling away from Zimmerman after attacking him.

Who was screaming on the 911 recording?
Proving who was screaming for help in the background of a 911 call was a crucial goal on both sides. While the prosecution sought to convince jurors that it was Martin crying out for help, the defense did the same for its client—if it was Zimmerman screaming, it adds weight to his argument that he was under attack by the teen. Both Martin’s mother and his younger brother testified that it was Martin on the recording, while Zimmerman’s mother and several family friends testified that Zimmerman was the one screaming. Zimmerman’s attorneys also called to the stand the dead teen’s father, Tracy Martin, who initially told police he couldn’t determine whose voice he had heard on the tape but later said it was his son’s.

How good was Zimmerman at mixed martial arts?
At the time of the shooting, Zimmerman was taking mixed martial arts classes three times a week. Lest jurors believe this gave him any advantage over a 17-year-old boy, his instructor, a defense witness, testified that he pretty much sucked at it. The witness, Adam Pollack, said that Zimmerman was “physically soft” and extremely unathletic. While the defense cast Zimmerman as a weakling who was easily overpowered by Martin, the prosecution portrayed him as an instigator who “brought a gun to a struggle, to a fight that he started…wanting to make sure the victim didn’t get away.”

What if Zimmerman did not commit second-degree murder?
Judge Debra S. Nelson ruled on Thursday that if jurors find Zimmerman not guilty of murder in the second degree, they could still convict him of manslaughter, which is defined as “the unlawful killing of a person without malice.” It is an easier charge to prove than second-degree murder, and comes with a maximum sentence of 30 years.