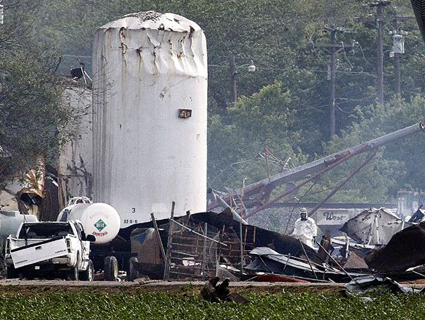 Searchers sift through the wreckate at the West Fertilizer Co. on April 18th. Ron Jenkins/MCT/Zuma

In the two and a half months since an explosion at a West, Texas, fertilizer storage facility left 12 first responders dead and at least 200 people injured, two things have become clear. The disaster could have been avoided if the proper regulations had been in place and enforced—and state and federal agencies don’t appear to be in a hurry to put those regulations in place or enforce them.

Texas, whose lax regulatory climate has come in for scrutiny in the aftermath of the West explosion, went into a special session of its state legislature on Monday to push through an omnibus abortion bill designed to regulate 37 abortion clinics out of existence. But the 2013 session will come to a close without any significant action to impose safeguards on the 74 facilities in the state that contain at least 10,000 pounds of ammonium nitrate.

Lawmakers in Austin have a handy excuse for punting on new fertilizer regulations: That would be intrusive. State Sen. Donna Campbell, the Republican who helped to shut down Democratic Sen. Wendy Davis’ filibuster of the abortion bill on procedural grounds, told the New York Times that lawmakers should be wary of monitoring chemical plants more closely because there’s “a point at which you can overregulate.”

As the investigations into the West blast have shown, though, over-regulation is hardly a risk in Texas. The disaster was notable for just how little regulation there actually was and how little it was enforced. Since the April 17 disaster we’ve learned that:

In other words,  there’s plenty of low-hanging fruit for Texas lawmakers to tackle to prevent future Wests. And yet, in the wake of the explosion, the state of Texas has taken exactly one concrete step to prevent future disasters from happening: It created a website that allows people to determine if there’s a chemical plant in their neighborhood. That’s information that should certainly be available to the public, but it shouldn’t be confused with a step that’s making those plants safer.

The Texas state fire marshal offered to issue voluntary best-practices recommendations for counties without fire codes, and to inspect chemical facilities—again, voluntarily—if the owners so wished, but the effect of that is hampered by the fact that rural counties, where most chemical facilities are located, are still prohibited under Texas law from enacting fire codes. A bill that would have ended that prohibition, which Gov. Rick Perry declined to throw his support behind, went nowhere this session. It is not being considered at the special session.

Legislators also talked about suggesting that facilities put up some signs to notify people about the presence of potentially hazardous chemicals nearby.

The only public statements on West from the state’s top lawmakers in the last month came when the Federal Emergency Management Agency turned down Texas’ request for $17 million in disaster assistance for the disaster it did nothing to prevent on the grounds that Texas has the money to pay for it. (And it does—Texas’ rainy day fund is set to hit $8 billion by 2015.)

Maybe if pro-choice activists really want to stop Texas from regulating clinics they should just start calling them “fertilizer plants.”