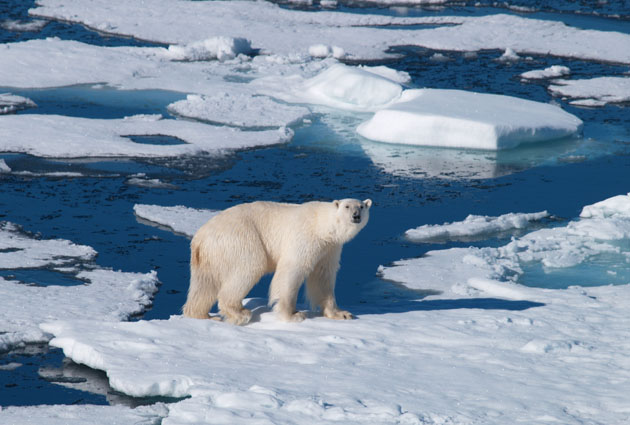 On its first day of broadcasting, Al Jazeera America devoted 30 minutes to climate change—more time than top shows on CNN and Fox News have given to this issue in the past four-and-a-half months, combined. In fact, the full half-hour (24 minutes, plus commercials) of broadcast of Inside Story was equal to about half of the coverage climate change received in 2012 from the nightly news on ABC, CBS, NBC, and Fox, combined. For a network that promised to provide “unbiased, fact-based and in-depth, journalism,” this seems like a promising start.

According to Media Matters, Al Jazeera’s Inside Story had more coverage of climate change “than what was featured by CNN’s Erin Burnett OutFront and Anderson Cooper 360 and Fox News’ The O’Reilly Factor and Hannity combined in the past four and a half months.” It was just behind the 32 minutes that MSNBC’s Rachel Maddow has devoted over the same time period, though a long way back from Chris Hayes, who has spent a whopping hour and 42 minutes of his show on the subject since April 1 (not including a two-part documentary).

Inside Story opened by explaining that “for more than 20 years, 97 percent of scientific research has said climate change is happening, and that it is indeed caused by people. But despite the scientific evidence, Americans remain divided on the issue.” Which brings us to what might be the biggest difference in how Al Jazeera has decided to cover the issue.

Perhaps most significantly, Inside Story explored public opinion on climate science, and even presented differing views on climate policy, without once offering marginal contrarian viewpoints as a “counterbalance.” Ehab Al Shihabi, Al Jazeera America’s acting chief executive, has cited PBS as a model, and it showed. Other cable news channels have sometimes run afoul of this standard…

Al Jazeera America focused on the impacts of climate change, with a complementary discussion of some possible ways of mitigating them through political action. Notably, no politicians were interviewed, as few politicians are credible sources of information on, say, sea level rise. Instead, the guests—Michael Mann, Heidi Cullen and Klaus Jacob—were all scientists familiar with the topic at hand. Television news outlets don’t always do this well: in 2012, 89 percent and 12 percent of Sunday and nightly news coverage of climate change, respectively, was driven by politics.

To cut through the haze that has clouded the American debate on climate change, the show started by explaining how the waters have become so muddied. “Over the past ten years,” said Michael Mann, the director of the Earth Systems Science Center at Penn State, “[special interests] have literally spent hundred of millions of dollars in a major disinformation campaign—a campaign aimed at confusing the public. And that’s why we see this gulf between where the scientists stand…and where the public is.” It’s easy to think that this will be written off as biased journalism—and more information can actually make people more polarized on climate change—but for a network that’s trying to give people a reason to watch, it’s a good start.