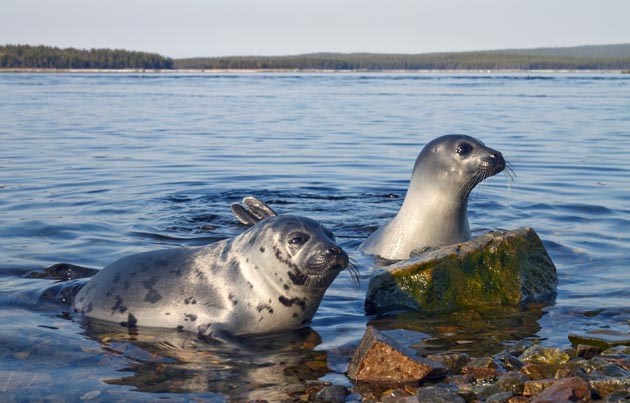 Shrinking sea ice is bad news for the baby harp seal, according to Duke University researchers. Pagophilus groenlandicus relies on stable winter sea ice to provide a safe platform to give birth and nurse its young until the pups can swim, hunt, and fend off predators.

But the Duke team reports in PLOS ONE, the Public Library of Science journal, that in four harp seal breeding regions of the North Atlantic, the winter ice had declined by 6 percent a decade since 1979.

The researchers based the conclusion on satellite images of ice cover, yearly reports of seal strandings along the United States’ northeast coast, and DNA studies of the stranded population. They say that although adult seals seemed to survive the decline in sea ice cover, the young were increasingly at risk.

It wasn’t the weaker or the genetically inferior seals in the population that were most at risk: The hazard for the seal babies seemed to be across the board.

If they couldn’t be protected on a large raft of ice, they were more likely to perish and be washed ashore. In the years when ice cover was most reduced, the stranding rates for young seals rose most sharply.

Harp seals are literally pagophilic or ice-loving. They tend to be born in February and March, and are usually weaned after a fortnight. But the pups stay on the ice until they molt their white fur, and then take to the sea to journey northward to the summer feeding grounds.

If it were the weakest pups that perished, then the DNA samples taken from the beach strandings would differ significantly from those of seals caught accidentally by fishermen. There was no difference. So the decline in sea ice remains the best explanation for the rise in strandings.

“Our findings demonstrate that sea ice cover and demographic factors have a greater influence on harp seal stranding rates than genetic diversity,” said Brianne Soulen, one of the leaders of the study.