In the past decade, election spending by so-called 501(c)(4) nonprofit groups—so named for their particular section of the tax code—has spiked by a whopping 9,980 percent, from a few million dollars in 2002 to $256 million in 2012. Here at Mother Jones, we call this type of spending “dark money.” That’s because, the way the tax code works, donors to 501(c)(4) nonprofits are anonymous even as these nonprofits pour millions into elections.

As dark money has flowed into elections in greater amounts, Congress has tried to drag this spending into the sunlight with versions of the DISCLOSE Act. Each time, Republican filibusters blocked those bills. As things stand, the most promising strategy—and it’s not even that promising—for shining light on secret political spending is through the Securities and Exchange Commission, which is considering a rule requiring that publicly-traded companies disclose their election-related spending.

But transparency advocates are wrong to pin their hopes on the SEC or Congress. According to a new report by New York City Public Advocate Bill deBlasio and the Coalition for Accountability in Political Spending, 27 states already have laws on the books that should allow them to require far more disclosure from politically active nonprofits about their spending and their donors. That includes nine battleground states where, in 2012, the bulk of political spending took place—Colorado, Florida, Iowa, Michigan, Missouri, New Hampshire, New Mexico, North Carolina, and Ohio. 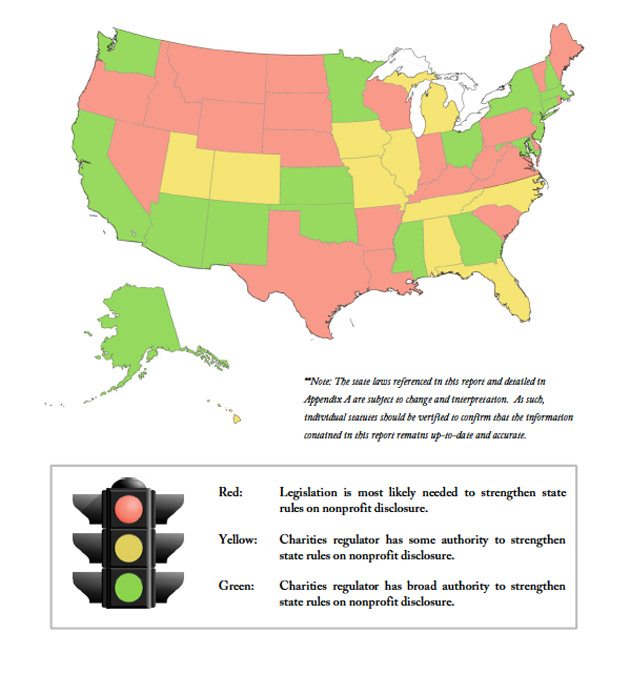 DeBlasio’s report cites New York State as an example of a state that took advantage of existing laws to beef up dark-money disclosure. In June, Attorney General Eric Schneiderman rolled out new regulations requiring nonprofits registered in New York State to disclose how much of their spending went toward to influencing elections at the local, state, and federal level. Schneiderman’s regulations will also force nonprofits that spend more than $10,000 on elections in New York State to file itemized spending and contribution reports, disclosing donors who give more than $100. Schneiderman didn’t need a new law to authorize all this—as New York’s attorney general, he’s also in charge of regulating the state’s charities.

This year, Connecticut, Maryland, and Utah have also passed various laws ratcheting up transparency of nonprofit groups. The states identified in deBlasio’s report don’t need to do that much—like New York, they can start implementing new transparency regulations right away. The only thing standing between these states and greater dark-money disclosure, the report concludes, “is the courage to act.”

Here is the full report: