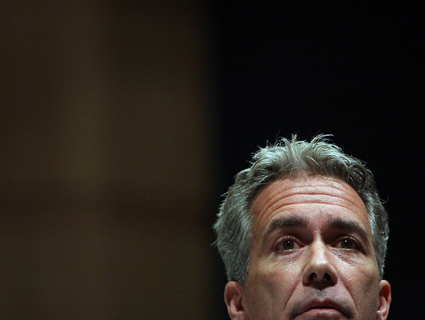 Wednesday is the 50th anniversary of the March on Washington, an event organized by a badass gay activist and keynoted by Martin Luther King Jr.’s (copyrighted) “I Have a Dream” speech. It’s a time for reflection on where the United States has been and where it’s headed.

Walsh, a tea partier elected in the conservative wave of 2010, has reinvented himself as a talk radio host after getting trounced last fall by Iraq war vet Tammy Duckworth. On Wednesday, Walsh celebrated King’s legacy by drafting a list of problems he believes afflict African Americans, such as an unwillingness to take responsibility for their own lives, and a total dependency on “the government plantation”:

I have a dream that all black parents will have the right to choose where their kids attend school.

I have a dream that all black boys and girls will grow up with a father.

I have a dream that all young black men will say “no” to gangs and to drugs.

I have a dream that all black young people will graduate from high school.

I have a dream that young black men won’t become fathers until after they’re married and they have a job.

I have a dream that young unmarried black women will say “no” to young black men who want to have sex.

I have a dream that today’s black leadership will quit blaming racism and “the system” for what ails black America.

I have a dream that black America will take responsibility for improving their own lives.

I have a dream that one day black America will cease their dependency on the government plantation, which has enslaved them to lives of poverty, and instead depend on themselves, their families, their churches, and their communities.

You can listen to the audio of Walsh himself reading it, if you hate yourself.

Walsh’s dream that all black boys and girls will have fathers who play an active role in their lives and wean them away from a culture of dependency is somewhat ironic given that his ex-wife sued him in 2011 for $117,437 in overdue child support payments. (The former couple settled in 2012; details of the settlement have not been released, although Walsh’s ex-wife released a statement at the time saying the congressman was not a “deadbeat.”)