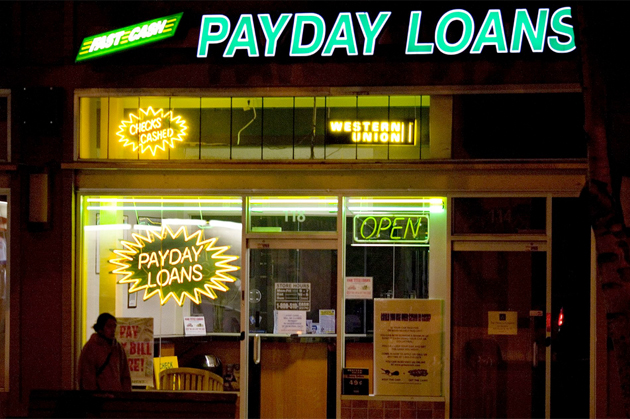 This story first appeared on the ProPublica website and in the St. Louis Post-Dispatch.

In 2008, payday lenders suffered a major defeat when the Ohio legislature banned high-cost loans. That same year, they lost again when they dumped more than $20 million into an effort to roll back the law: The public voted against it by nearly two-to-one.

It’s just one example of the industry’s resilience. In state after state where lenders have confronted unwanted regulation, they have found ways to continue to deliver high-cost loans.

Sometimes, as in Ohio, lenders have exploited loopholes in the law. But more often, they have reacted to laws targeted at one type of high-cost loan by churning out other products that feature triple-digit annual rates.

To be sure, there are states that have successfully banned high-cost lenders. Today Arkansas is an island, surrounded by six other states where ads scream “Cash!” and high-cost lenders dot the strip malls. Arkansas’ constitution caps non-bank rates at 17 percent.

But even there, the industry managed to operate for nearly a decade until the state Supreme Court finally declared those loans usurious in 2008.

The state-by-state skirmishes are crucial, because high-cost lenders operate primarily under state law. On the federal level, the recently formed Consumer Financial Protection Bureau can address “unfair, deceptive or abusive practices,” said a spokeswoman. But the agency is prohibited from capping interest rates.

In Ohio, the lenders continue to offer payday loans via loopholes in laws written to regulate far different companies — mortgage lenders and credit repair organizations. The latter peddle their services to people struggling with debt, but they can charge unrestricted fees for helping consumers obtain new loans into which borrowers can consolidate their debt.

Today, Ohio lenders often charge even higher annual rates (for example, nearly 700 percent for a two-week loan) than they did before the reforms, according to a report by the nonprofit Policy Matters Ohio. In addition, other breeds of high-cost lending, such as auto-title loans, have recently moved into the state for the first time.

Earlier this year, the Ohio Supreme Court agreed to hear a case challenging the use of the mortgage law by a payday lender named Cashland. But even if the court rules the tactic illegal, the companies might simply find a new loophole. In its recent annual report, Cash America, the parent company of Cashland, addressed the consequences of losing the case: “if the Company is unable to continue making short-term loans under this law, it will have to alter its short-term loan product in Ohio.”

Amy Cantu, a spokeswoman for the Community Financial Services Association, the trade group representing the major payday lenders, said members are “regulated and licensed in every state where they conduct business and have worked with state regulators for more than two decades.”

“Second generation” products
When unrestrained by regulation, the typical two-week payday loan can be immensely profitable for lenders. The key to that profitability is for borrowers to take out loans over and over. When the CFPB studied a sample of payday loans earlier this year, it found that three-quarters of loan fees came from borrowers who had more than 10 payday loans in a 12-month period.

But because that type of loan has come under intense scrutiny, many lenders have developed what payday lender EZCorp chief executive Paul Rothamel calls “second generation” products. In early 2011, the traditional two-week payday loan accounted for about 90 percent of the company’s loan balance, he said in a recent call with analysts. By 2013, it had dropped below 50 percent. Eventually, he said, it would likely drop to 25 percent.

But like payday loans, which have annual rates typically ranging from 300 to 700 percent, the new products come at an extremely high cost. Cash America, for example, offers a “line of credit” in at least four states that works like a credit card — but with a 299 percent annual percentage rate. A number of payday lenders have embraced auto-title loans, which are secured by the borrower’s car and typically carry annual rates around 300 percent.

The most popular alternative to payday loans, however, are “longer term, but still very high-cost, installment loans,” said Tom Feltner, director of financial services at the Consumer Federation of America.

Last year, Delaware passed a major payday lending reform bill. For consumer advocates, it was the culmination of over a decade of effort and a badly needed measure to protect vulnerable borrowers. The bill limited the number of payday loans borrowers can take out each year to five.

“It was probably the best we could get here,” said Rashmi Rangan, executive director of the nonprofit Delaware Community Reinvestment Action Council.

Lenders can adapt their products with surprising alacrity. In Texas, where regulation is lax, lenders make more than eight times as many payday loans as installment loans, according to the most recent state data. Contrast that with Illinois, where the legislature passed a bill in 2005 that imposed a number of restraints on payday loans. By 2012, triple-digit-rate installment loans in the state outnumbered payday loans almost three to one.

In New Mexico, a 2007 law triggered the same rapid shift. QC Holdings’ payday loan stores dot that state, but just a year after the law, the president of the company told analysts that installment loans had “taken the place of payday loans” in that state.

New Mexico’s attorney general cracked down, filing suits against two lenders, charging in court documents that their long-term products were “unconscionable.” One loan from Cash Loans Now in early 2008 carried an annual percentage rate of 1,147 percent; after borrowing $50, the customer owed nearly $600 in total payments to be paid over the course of a year. FastBucks charged a 650 percent annual rate over two years for a $500 loan.

The products reflect a basic fact: Many low-income borrowers are desperate enough to accept any terms. In a recent Pew Charitable Trusts survey, 37 percent of payday loan borrowers responded that they’d pay any price for a loan.

The loans were unconscionable for a reason beyond the extremely high rates, the suits alleged. Employees did everything they could to keep borrowers on the hook. As one FastBucks employee testified, “We just basically don’t let anybody pay off.”

“Inherent in the model is repeated lending to folks who do not have the financial means to repay the loan,” said Karen Meyers, director of the New Mexico attorney general’s consumer protection division. “Borrowers often end up paying off one loan by taking out another loan. The goal is keeping people in debt indefinitely.”

In both cases, the judges agreed that the lenders had illegally preyed on unsophisticated borrowers. Cash Loans Now’s parent company has appealed the decision. FastBucks filed for bankruptcy protection after the judge ruled that it owed restitution to its customers for illegally circumventing the state’s payday loan law. The attorney general’s office estimates that the company owes over $20 million. Both companies declined to comment.

Despite the attorney general’s victories, similar types of loans are still widely available in New Mexico. The Cash Store, which has over 280 locations in seven states, offers an installment loan there with annual rates ranging from 520 percent to 780 percent. A 2012 QC loan in New Mexico reviewed by ProPublica carried a 425 percent annual rate.

“Playing Cat and Mouse”When states — such as Washington, New York and New Hampshire — have laws prohibiting high-cost installment loans, the industry has tried to change them.

A bill introduced in Washington’s state senate early this year proposed allowing “small consumer installment loans” that could carry an annual rate of more than 200 percent. Though touted as a lower-cost alternative to payday loans, the bill’s primary backer was Moneytree, a Seattle-based payday lender. The bill passed the state senate, but stalled in the house.

In New Hampshire, which banned high-cost payday loans in 2008, the governor vetoed a bill last year that would have allowed installment loans with annual rates above 400 percent. But that wasn’t the only bill that high-cost lenders had pushed: One to allow auto-title loans, also vetoed by the governor, passed with a supermajority in the legislature. As a result, in 2012, New Hampshire joined states like Georgia and Arizona that have banned triple-digit-rate payday loans but allow similarly structured triple-digit-rate auto-title loans.

Texas has a law strictly limiting payday loans. But since it limits lenders to a fraction of what they prefer to charge, for more than a decade they have ignored it. To shirk the law, first they partnered with banks, since banks, which are regulated by the federal government, can legally offer loans exceeding state interest caps. But when federal regulators cracked down on the practice in 2005, the lenders had to find a new loophole.

Just as in Ohio, Texas lenders started defining themselves as credit repair organizations, which, under Texas law, can charge steep fees. Texas now has nearly 3,500 of such businesses, almost all of which are, effectively, high-cost lenders. And the industry has successfully fought off all efforts to cap their rates.

Seeing the lenders’ statehouse clout, a number of cities, including Dallas, San Antonio and Austin, have passed local ordinances that aim to break the cycle of payday debt by limiting the number of times a borrower can take out a loan. Speaking to analysts early this year, EZCorp’sRothamel said the ordinances had cut his company’s profit in Austin and Dallas by 90 percent.

But the company had a three-pronged counterattack plan, he said. The company had tweaked the product it offered in its brick-and-mortar outlets, and it had also begun to aggressively market online loans to customers in those cities. And the industry was pushing a statewide law to pre-empt the local rules, he said, so payday companies could stop “playing cat and mouse with the cities.”

Jerry Allen, the Dallas councilman who sponsored the city’s payday lending ordinance in 2011, said he wasn’t surprised by the industry’s response. “I’m just a lil’ ol’ local guy in Dallas, Texas,” he said. “I can only punch them the way I can punch them.”

But Allen, a political independent, said he hoped to persuade still more cities to join the effort. Eventually, he hopes the cities will force the state legislature’s hand, but he expects a fight: “Texas is a prime state for these folks. It’s a battleground. There’s a lot of money on the table.”