College attendance rates for African-American and Latino students have been increasing steadily in recent years. But here’s the bad news that comes along with that: those students are mostly attending non-selective four-year colleges and community colleges, while whites are increasingly attending prestigious colleges and universities, the Washington Post reports.

A study released Wednesday by the Georgetown University Center on Education and the Workforce found that between 1995 and 2009, college enrollment more than doubled for Latinos and jumped 73 percent for African Americans, while only increasing 15 percent for whites. During that period, 80 percent of white college freshman enrolled in the nation’s top 468 colleges, while only 13 percent of Latinos and nine percent of African-Americans went to those selective four-year schools. More than two-thirds of African Americans and almost three-quarters of Hispanics went to non-selective schools. Look: 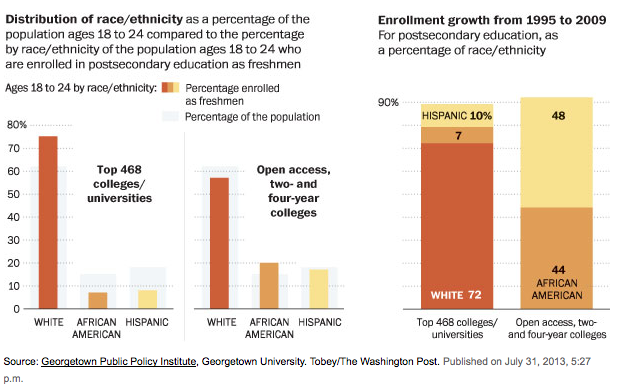 It’s not because minority students are less qualified. Thirty percent of African-American and Hispanic students who had an A average in high school attend community colleges, compared with 22 percent of whites, according to the report, which says that unequal educational outcomes for minorities can be attributed to things like family income, and peer expectations, but also to simply not being white.

“The higher-education system is colorblind in theory but in fact operates, at least in part, as a systematic barrier to opportunity for many blacks and Hispanics, many of whom are college-qualified but tracked into overcrowded and under-funded colleges, where they are less likely to develop fully or to graduate,” Anthony Carnevale, one of the report’s authors, told the Post.

Here’s how unequal college paths for whites and non-whites contributes to growing inequality in America, via the Post:

Students at the nation’s top 468 colleges are the beneficiaries of much more spending—anywhere from two to five times as much as what is spent on instruction at community colleges or other schools without admissions requirements. And students at top schools are far more likely to graduate than students at other institutions, even when they are equally prepared, according to the report. In addition, graduates of top schools are far more likely than others to go on to graduate school.

The financial implications of those differences are huge: A worker with an advanced degree is expected to earn as much as $2.1 million more in his or her lifetime than a college dropout, the report said. Also, the report said graduates of selective colleges earn an average of $67,000 a year 10 years after graduation, about $18,000 a year more than their counterparts who graduate from non-selective schools.

The report’s authors say that in order to combat growing racial polarization in higher education, more resources need to be directed to improve students’ academic experiences at non-selective schools, which often struggle with over-crowded classrooms and outdated materials. The authors say that colleges and lawmakers should also do more to bring black and Hispanic students into top schools.

The report comes just as the Supreme Court recently dealt a blow to affirmative action. In June, the high court allowed affirmative action to survive, but made it harder to institute as part of the admissions process, ruling that schools must first prove there are “no workable race-neutral alternatives” to achieve diversity on campus.