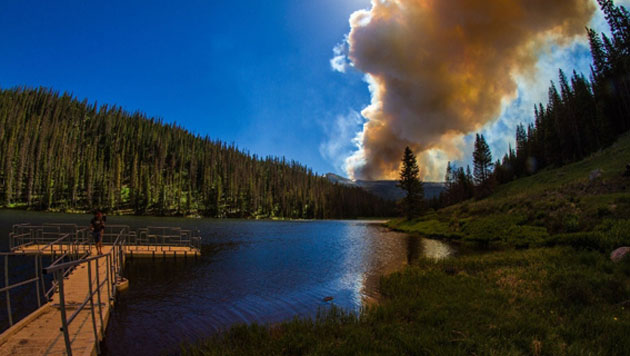 Over and again, I am struck by the paradox of the beauty inherent in some terror. Usually, this comes in the form of weather. Hurricanes from space are stately and serene, completely belying the destruction below. A mesocyclone swirls, dark and foreboding and gorgeous, over a Texas plain. Rapidly-forming storm-cells create tornadoes which devastate Oklahoma, but are delicate and soft when seen from space.

Wildfires aren’t exactly weather, but they are related, and certainly fall into this category of terrifying yet still distressingly beautiful. This summer, my home state of Colorado suffered the most destructive fire in its history. Oddly, the number and acreage of the fires haven’t broken records, but the locations are key; two lives were lost in the Black Forest fire, and the property damage was historic.

Photographer Matt Johnson traveled to Colorado in June 2013 and shot time-lapse footage of the West Fork Complex Fires, another wildfire which was triggered by lightning and eventually burned over 100,000 acres. The video he created is both stunningly gorgeous and viscerally horrifying.

The first hint of the fires is in the opening shots; the distant clouds are lovely, but some are slightly discolored. Having seen many fires in this area, I recognized the reddish tint to the clouds, and the hint of brown around the edges. At the 1:14 mark the shot is lovely, by the clouds on the extreme left are darker, more ominous. Then, at 1:56, the shots at night make it clear what you’re seeing. 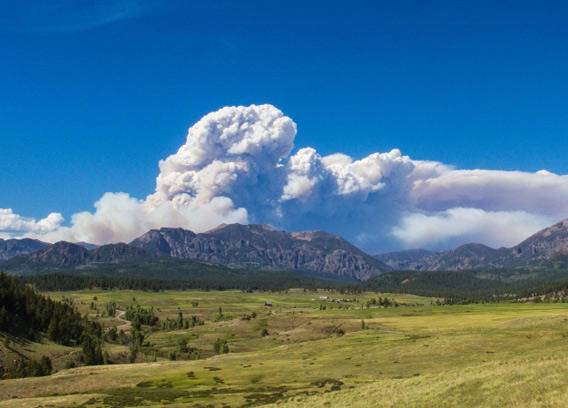 A pyrocumulus clouds created by the wildfire. Matt Johnson

At 2:20, a long shot of the mountains and fire are amazing. When trees burn, they give off dark smoke, of course, but also the water in the vegetation becomes steam, rising as white clouds. Together, they form the main plumes seen, rising violently due to the extreme heat of the fire (the technical term is convection, where hot air rises and cool air sinks). This creates what’s called a pyrocumulus cloud; a cauliflower-like cloud usually associated with rain and thunderstorms. In this case, the rising column of smoke and steam also lifts up and compresses the air above it, which can cause water vapor to condense and form temporary pileus clouds, with curved hoods and streamers like cloudy caps.

These fires were also seen from space: 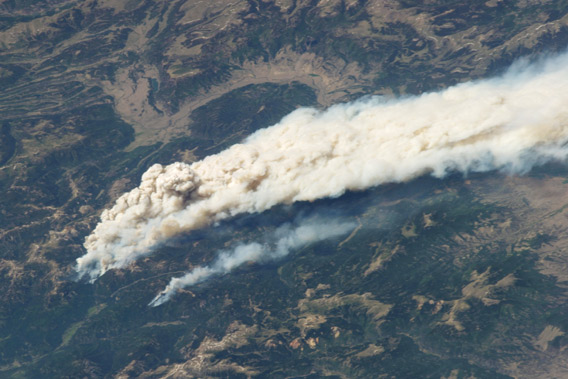 That’s a picture taken by an astronaut on the International Space Station from June 19, 2013. Again, it’s menacing yet mesmerizing.

The rash of fires we’ve been experiencing over the years has multiple causes. Part is due to the multi-year drought we’ve been suffering though, and part due to a surplus of wildfire-fueling undergrowth that hasn’t been cleared out by smaller, natural fires (we tend to put out those fires, ironically, to prevent them from growing). But another source is global warming: The drought may be due to this, but over the years summers have started earlier and lasted longer. Bark beetle populations have soared because their breeding season has lasted longer, giving them more time to complete their life cycles, and milder winters have somewhat mitigated the usual cold-weather die-offs. The number of insect-killed trees I’ve seen in the Rockies has been troubling. Over at Climate Central, Andrew Freedman has a lot more detail about this.

Some people scoff that humans can have an affect on this great big world of ours. These people have their eyes tightly screwed shut. I wonder if the eerie beauty of videos like this one of the Colorado fires will help; looking in the face of raw ugliness is hard and can make it harder to accept the truth, but when it’s wrapped in such compelling footage, perhaps it’s easier to understand the unsettling reality of what’s happening.