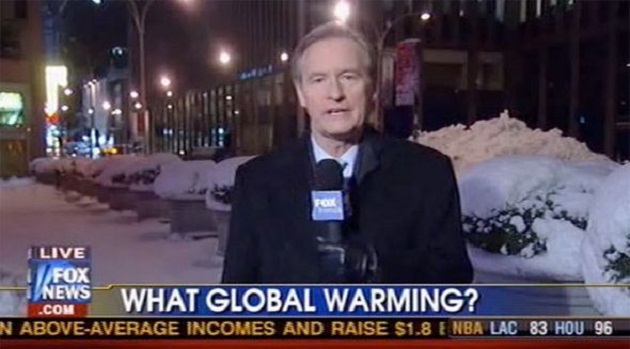 In the past several years, a number of polls have documented the huge gap between liberals and conservatives when it comes to their acceptance of the science of climate change. Naturally, then, researchers have increasingly turned their attention to trying to explain this dramatic divide over what is factually true. And it wasn’t long before they homed in on the role of conservative media in particular—thus, a number of studies (e.g., here) show that watching Fox News increases your risk of holding incorrect beliefs about the science of climate change.

Now, a new paper just out in the journal Public Understanding of Science takes this line of inquiry further, beginning to unpack precisely how conservative media work to undermine the public’s acceptance of science. The paper shows that a distrust of climate scientists is a significant factor underlying the modern denial of global warming, and moreover, that watching Fox News and listening to Rush Limbaugh both increase one’s level of distrust of these scientific experts. Or as the paper puts it, “[C]onservative media use decreases trust in scientists which, in turn, decreases certainty that global warming is happening.”

The study, conducted by Jay Hmielowski of the University of Arizona and colleagues at several other universities, relied on a large polling sample of Americans in two phases: 2,497 individuals were interviewed in 2008, and then a smaller sample of 1,036 were reinterviewed in 2011. The respondents were asked about what kind of media they consumed—conservative choices included Fox News and the Rush Limbaugh Show; “non-conservative” media outlets included CNN, MSNBC, National Public Radio, and network news—as well as about how much they trusted or distrusted climate scientists. They were also asked about their belief that global warming is happening. (The study controlled for variables like political ideology, religiosity, and other demographic factors.)

The authors then proposed that distrust of scientists is a key link in the chain between watching Fox (or listening to Rush) and coming to doubt climate science. The idea is that because most people don’t know a great deal about the science of global warming, they rely on “heuristics”—or mental shortcuts—to make up their minds about what to believe. “Trust” (or the lack thereof) is a classic shortcut, allowing one to quickly determine who’s right and who’s wrong in a seemingly complex and data-laden debate. Or as the paper put it: “The public’s low level of knowledge and the media’s conflicting, often value-laden messages about global warming lead people to use heuristics to make sense of this complex issue.”

Evidence of Fox and Rush Limbaugh raising doubts about climate scientists—in a way that could generate distrust—isn’t hard to come by. Limbaugh includes scientists in his “four corners of deceit…government, academia, science, and the media.” As for Fox, there are myriad examples of coverage that could be said to cast doubt on climate science. For instance, there’s the 2009 memo, exposed by Media Matters, in which Fox Washington editor Bill Sammon instructed staff to cast doubt on climate research in their coverage.

It seems unlikely, however, that conservative media alone can account for the distrust of science on the right. In a major 2012 study, the sociologist Gordon Gauchat showed that conservatives have lost trust in scientists across the board over a period of many decades, dating all the way back to 1974. Fox News only launched in 1996, however; Rush Limbaugh started national broadcasts in 1988.

Clearly, then, other factors must be involved in sowing distrust as well—including a long history of left-right policy fights in which scientists seemed to be on the “liberal” side, with a canonical example being the battle over Ronald Reagan’s “Star Wars” program in the 1980s.

As a result of these conflicts, politically attuned conservatives today are well aware that scientists and academics rarely seem to come out on their side. Perhaps Fox News and the Rush Limbaugh Show are, in the end, simply the media reflection of that long-standing conservative perception.