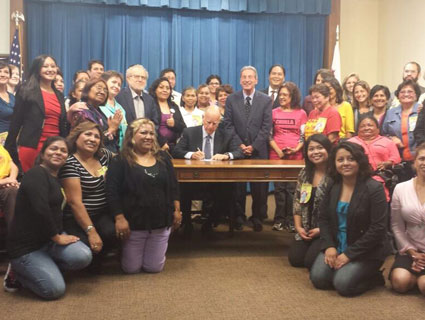 The law now reads that a domestic work employee “shall not be employed more than nine hours in any workday or more than 45 hours in any workweek unless the employee receives one and one-half times the employee’s regular rate of pay” for all overtime hours worked. Hour protections are, without a doubt, an important gain for domestic workers, who “are prone to be overworked on a weekly and daily basis,” according to Sarah Leberstein, an attorney at the National Employment Law Project.

But lost in the legislative process were a number of protections, including:

(The signed bill also includes a sunset, stipulating that a committee reviews the bill before January 2017.)

Even though the California bill doesn’t measure up to, say, New York’s 2010 bill of rights—which provides paid days of rest and protections for domestic workers who suffer sexual or racial harassment—Leberstein argues that it is still an important symbolic win: “It shows that domestic workers are on a roll, that there’s growing recognition that this work is really crucial and absolutely needs the basic protections that other workers have. It shows that there’s momentum.”