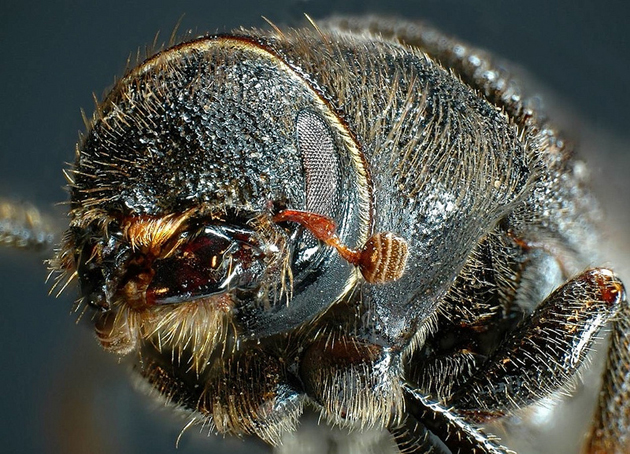 In 1996 Colorado received a very unwelcome—and hungry—house guest, the mountain pine beetle, whose voracious appetite for pine has since killed off millions of acres of trees there. A few years later, the beetles came knocking in British Columbia and have now knocked out over half the province’s pine timber. The full-bore invasion of these critters, each no bigger than a grain of rice, is now one of the most pressing ecological disasters in the West, and their spread, scientists believe, is driven by climate change.

The beetles aren’t alone: Rising equatorial temperatures have pushed a menagerie of pests north at an alarming rate of nearly 10,000 feet every year since 1960, according to a new survey out today in Nature. Researchers led by biologist Dan Bebber at the UK’s University of Exeter combed through databases hosted by the non-profit CABI, which aggregates scientific and trade literature on agriculture, for the first documented appearance of over 600 kinds of pests (including insects, fungi, viruses, and bacteria), over a 50-year period in the Northern Hemisphere. They found, averaged across 14 taxonomic groups, a distinctive northward migration, wherein species first noticed at southern latitudes were, at a later date, discovered anew at northern latitudes.

The chart below, from the paper, shows the distribution range of the different pest groups Bebber examined, with the vertical axis indicating distance from the equator (positive distances indicate north; negative distances indicate south) and the horizontal axis indicating time, from 1960 to the present. Overall, the groups show a gradual northward migration over time (up and to the right): 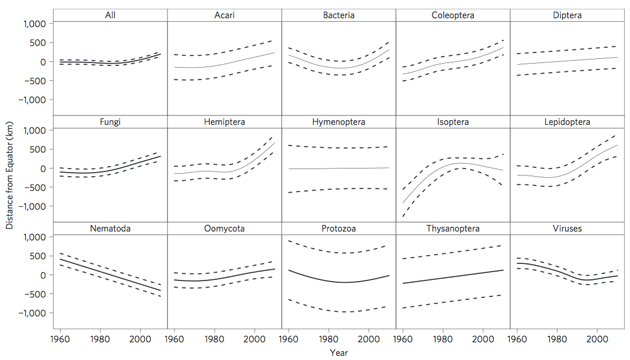 Climate change has previously been linked to the movement of other pest species, including butterflies (strange to imagine these as “pests,” but the larvae of their taxonomic order, Lepidoptera, wreak more havoc on crops and trees than any other group of insects) and avian flu, but Bebber says his analysis is the first to show a “significant shift” across many kinds of pests. For many of these creepy critters, weather conditions can be decisive in how deep they dig in; pine beetles locked onto Colorado primarily because winters, when many of them historically froze to death, had warmed enough for a larger chunk of the population to survive into the following year.

The trend Bebber identified should sound alarm bells for farmers and the agriculture industry in northern-latitude countries, he said—bells already sounded by pine beetles in Colorado and British Columbia. Earlier studies have shown that pests already destroy over 10 percent of the global harvest; that number could rise if higher temperatures push more pests into valuable breadbaskets like the US Corn Belt or Russia’s wheat fields.

Of course, pests are also spread for reasons having nothing to do with climate change, principally via human-caused contamination: Hitching a ride on a shipment of livestock or produce, for example, or international trade in live plants; Bebber says more research needs to be done to determine exactly what role climate change plays in this northward migration.

Also, Bebber cautions that before all northern countries begin to seek shelter from a Biblical plague, his study shows that more detailed pest tracking is needed, especially in poorer equatorial states that traditionally spend less money on formal monitoring, to give detailed advance notice to countries that could begin to see new pests.

“Our data on global distributions of many pests and pathogens is poor,” he said. “We need a better effort to describe what’s there, what’s emerging, and what’s coming out next.”