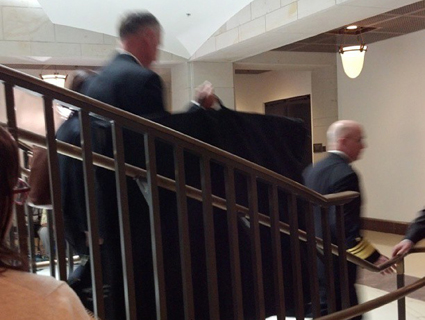 Briefers arrive at the Captiol for a classified meeting on Syria on Thursday.Tim Murphy/Instagram

Even as many members of Congress insist they’re holding out on a final decision on war in Syria until they have more time to study the issue, only a fraction actually attended Thursday’s classified intelligence briefing on Syria in the basement of the Capitol. The briefing was open to all senators and representatives of both parties. But only a few dozen members—mostly Democrats—ultimately emerged several hours after it started.

The spotty attendance of Thursday’s briefing (members will have another chance to review intelligence on Friday) underscores one of the larger problems facing the administration as it attempts to build support for next week’s expected vote on an authorization to use military force. Instead of getting the hard sell in Washington, many members of Congress are still finishing up the summer recess in their districts, where they’re encountering overwhelming backlash to any intervention from constituents. Florida Democratic Rep. Alan Grayson said calls of opposition outnumber calls for intervention in his district 100 to 1—”like everyone else.” Texas GOP Rep. John Culberson put the ratio slightly lower—99 to 1.

If the information discussed in the briefing was meant to be a game-changer for the (at last count) 106 congressmen and 53 senators who remain undecided, it fell short of its target. None of the members who entered on-the-fence seemed to emerge much closer to a final decision—with the exception of Sen. Joe Manchin (D-W.V.), who released a statement shortly afterward saying he’d vote against the resolution. Rep. Tulsi Gabbard (D-Hawaii) said “there are many considerations.” Rep. Rush Holt (D-N.J.) said he’s “still collecting [his] thoughts.” Rep. Sheila Jackson-Lee (D-Tex.) said “this is an opportunity for Americans to stand together,” but offered no indication of how those Americans should stand. Rep. Joseph Kennedy III (D-Mass.) just walked really fast.

Perhaps that’s because there was nothing much new to offer. Grayson, one of the most outspoken opponents of intervention—he dressed for the occasion in a black tie plastered with multi-colored peace signs and reminded reporters, once more, that he owns the website DontAttackSyria.com—lamented that the presentation he saw on Thursday was almost identical to the one he’d heard earlier in the week. “They are recycling the same old stuff,” he said. “I heard nothing new.”