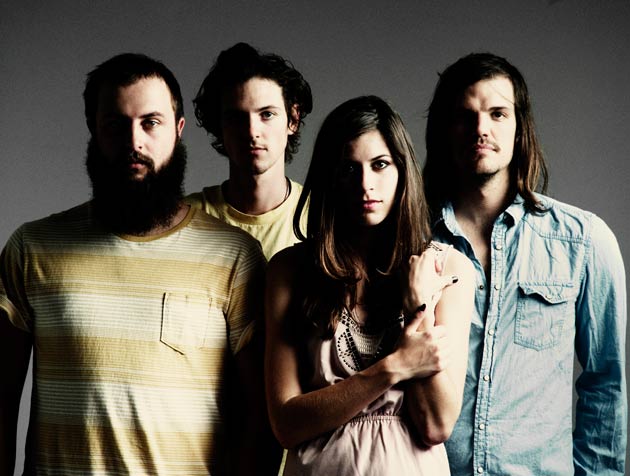 During the performance of a song called “Penitentiary” at San Francisco’s Outside Lands festival last month, Houndmouth’s curly-haired guitarist and vocalist Matt Myers was very deliberate in his annunciation of the first line: “I hid a batch in Fresco/I couldn’t score a job/So I did the next best thing and I learned how to rob.” He’s referring to a Dallas suburb—not to be mistaken for Frisco, San Francisco’s out-of-vogue nickname.

“I thought of changing it to Waco,” Myers told me after the set, lounging backstage with bandmates Katie Toupin (keys), Zak Appleby (bass), and Shane Cody (drums), and sipping bourbon from a mug. “I know people from San Francisco don’t like to hear their city called Frisco.”

From the Hills Below the City, Houndmouth’s debut on Rough Trade earlier this year, features a dozen tracks of corn-fed middle-American roots rock. In addition to the Frisco/Fresco thing, it name-drops at least a half-dozen southern states, towns, and cities. The songs are filled with stories about hittin’ the road, ridin’ the rails, gettin’ thrown in jail, and comin’ back home—dropping all nonessential “g”s.

Despite a mixed critical reception, the album has a number of catchy singles, including the opening track “On the Road” which features a Myers/Toupin conversational duet that is more than a little reminiscent of “Home,” Edward Sharpe and the Magnetic Zeros’ mega-hit. Houndmouth also has garnered comparisons to the Americana-meets-honky-tonk pop stylings of the Avett Brothers, the throwback bluesy cool of labelmates Alabama Shakes, and the layered harmonizing of salt-of-the-earth rock legend The Band. But unlike, say, Johnny Cash, who wrote songs about prison life after being locked up himself—or the late, great Levon Helm, who sung like an old, weathered farmer and actually was an old, weathered farmer—Houndmouth’s album is filled with tales that feel more imagined than lived.

And yet, something transformative happens to those tunes when the band takes the stage. Following a packed summer of festivals, Houndmouth will embark this fall on its first national headlining tour, which is great, because it’s a band best experienced live. At Outside Lands, the band members all stepped out with big, earnest grins, and came across as inherently likable and immensely humbled to be performing in front of any kind of crowd. Their instrument assignments are fluid, with Toupin at one point settling in at the drum kit and Cody lumbering up to the mic. On every other song they switch up on lead vocals, with the other members joining in with big, tight, three-part harmonies. 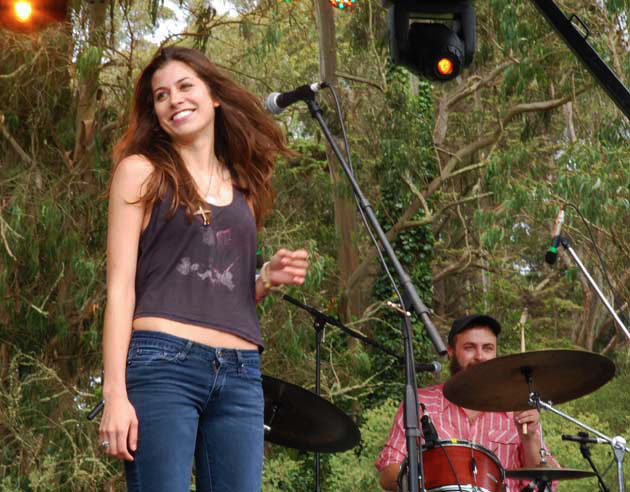 All born and raised in Indiana, the bandmates grew up in neighboring towns and attended basketball games at rival high schools. They would sometimes play cards together or show up at the same parties, but didn’t make any musical connection until a few years out of high school.

Myers and Appleby teamed up to busk on the streets of New Albany, but said they got busted a few times for not having a permit. The two then joined a Motown cover band whose keyboard player’s lisp got thicker as the nights grew late and the drinks piled up.

On the side, Myers had teamed up with Toupin, who’d dropped out of college and picked up one of her daddy’s guitars, determined to become a blues singer. They played acoustic sets at local restaurants for crowds of disinterested diners. “That was the hardest thing we’ve ever done,” Toupin recalls. “Four hours of playing acoustic guitar to people who were eating dinner is pretty exhausting.”

“It was mostly terrible,” Myers added. “We needed drums!” 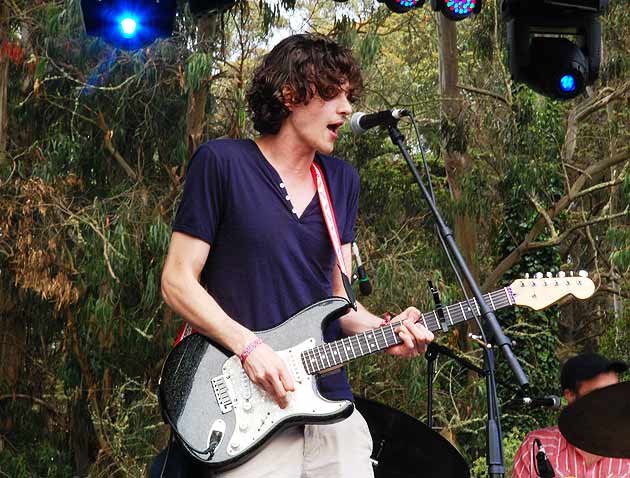 Meanwhile, Cody was in New York doing a sound engineering internship and living with a “sugar mama” on Manhattans’ Upper East Side. Right around the time those things were winding down, he got a call from Myers back home about working on some music together.

Cody moved back to Indiana, and the four got together over beers and worked out “Penitentary” which Toupin and Myers had written while working in the restaurants. Cody recorded it and threw it up online. Within a few weeks, a few music blogs had taken notice. The song started circulating to a wider audience. “I can remember when we first put our music on SoundCloud. They’ve got this thing where you can see where the music is being played in the world, and I saw the first dot over in Europe,” Appleby recalls. “I was like, holy shit, there’s a dot in Europe! A Frenchman is listening to our music!”

Word of the band also reached Jeff Travis at Rough Trade, who went out to hear Houndmouth at a dimly lit bar called Molotov at South by Southwest. Travis signed the group and they’ve been touring pretty much nonstop since.

Getting so many miles under their belt and actually seeing and experiencing the big country they sing so fondly of seems to have infused some authenticity into their songs. After dreaming up characters whose home is the road, they’re actually stepping into those shoes. “No place that we go feels like real life,” Toupin says. “I don’t feel like we’ve settled in to where we belong. I think it will happen, but I feel most at home in the van.”