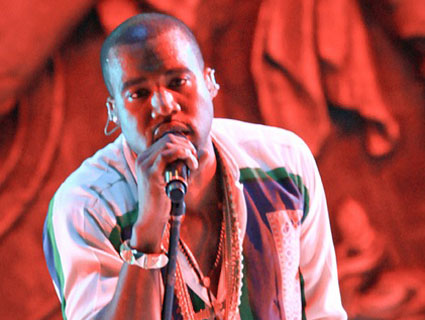 Trying to steal Taylor Swift’s thunder is no longer the most cringeworthy thing Kanye West has ever done.

Over the weekend, the hip-hop artist performed for a dictator’s kin. On Saturday, West was in Almaty (Kazakhstan’s largest city) performing at the wedding reception of Aisultan Nazarbayev, the 23-year-old grandson of Kazakh president Nursultan Nazarbayev.

Nazarbayev has ruled the central Asian country for 23 years since its independence from the dissolved Soviet Union, and has come under fire by human rights organizations for his authoritarian tactics, including attacks on a free press, torture, torpedoing workers’ rights, and jailing the political opposition. (In 2011, Sting canceled a gig in Kazakhstan after Amnesty International got in touch with him about the human rights abuses.)

For his performance (which included a rendition of  “Can’t Tell Me Nothing“), West reportedly received $3 million. Here’s a brief clip from the event:

A news agency in Kazakhstan reported that West was a personal guest of the controversial strongman. As you can imagine, human rights advocates aren’t thrilled about any of this.

“Someone like Kanye, who makes a living expressing his views, would find himself in a prison under Nazarbayev’s rule.”

“Kazakhstan is a human rights wasteland,” Thor Halvorssen, president of the Human Rights Foundation (HRF), said in a statement sent to Mother Jones. “The regime crushes freedom of speech and association; someone like Kanye, who makes a living expressing his views, would find himself in a prison under Nazarbayev’s rule.”

“The millions of dollars paid to West came from the loot stolen from the Kazakhstan treasury,” said Garry Kasparov, a noted critic of Vladimir Putin and chairman of HRF. “West has supported numerous charities throughout his career, including a few specifically focused on international human rights work. Kanye has entertained a brutal killer and his entourage…It’s up to the public to hold [him] accountable.”

West is now in the growing club of celebrities caught getting chummy with despots. In 2012, Kim Kardashian, the reality-TV socialite and mother of West’s child, is in it, too. In 2012, she traveled to Bahrain and generated positive press for a regime that was still taking heat for its bloody crackdown on political dissidents. (Following her arrival, Bahrain police were deployed to control “hard-line” Islamic protesters enraged at her presence.)

Earlier this summer, Jennifer Lopez was slammed by human rights groups for her paid performance at the lavish birthday bash of 56-year-old Gurbanguly Berdymukhamedov, the human-rights-quashing dictator of Turkmenistan. Mariah Carey, Beyoncé, Lionel Richie, and Usher had all danced and sung for relatives of the deceased Libyan dictator Moammar Qaddafi. Godfather of Soul James Brown and blues guitar legend B.B. King performed for Zaire president Mobutu Sese Seko, a vicious anti-communist tyrant. British supermodel Naomi Campbell was caught hanging out with Charles Taylor, a convicted war criminal and ex-president of Liberia. And the list goes on.

The human rights violations and internationally denounced actions of all the above can be found in five seconds on Google. Maybe famous people who don’t need the money—and the people they hire to vet their appearances—should use it more.

West’s publicist did not respond to Mother Jones‘ request for comment.