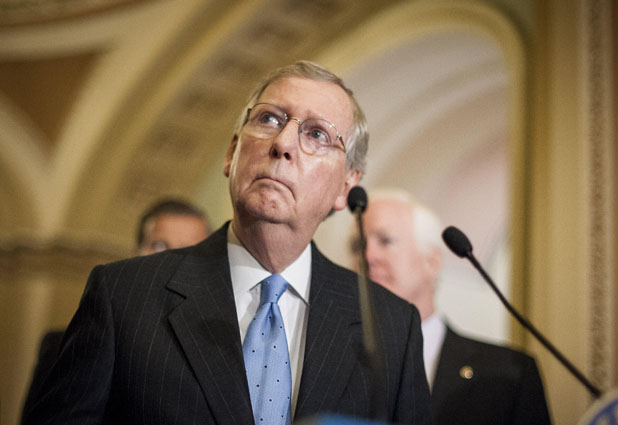 Washington’s version of Groundhog Day is approaching. In the coming days and weeks, President Barack Obama and congressional Republicans will again have to resolve dust-ups over spending legislation for the federal government (to avert a government shutdown) and the debt ceiling (to avoid a possible financial crisis). And to make this process more tortuous, conservative GOPers are insisting that the repeal of Obamacare be part of the mix, with House Republicans scheduled to vote this week on a bill to continue funding the government that withholds money for the health care law. On Monday, Obama all but dared the tea-party-driven Rs to shutter the government over Obamacare and took a hard line on the debt ceiling, declaring, “I will not negotiate over whether or not America keeps its word and meets its obligations…Let’s stop the threats. Let’s stop the political posturing. Let’s keep our government open.” But given the passions within the Grand Old Party, it could be tough for Obama to navigate the latest iteration of the Washington’s never-ending budget fight—especially since this time around, he may have to do so without his secret weapon: Mitch McConnell.

Wait a minute, you say. Mitch McConnell, the Republican Senate leader who has been the drum major in the GOP’s parade of obstructionism? The guy who famously quipped in 2010, “The single most important thing we want to achieve is for President Obama to be a one-term president”? Somehow he is key to Obama surviving the perilous course ahead? Well, in the past three years, McConnell has been a central player in cooking up with the White House those crafty compromises that resolved a string of budget and tax showdowns precipitated by House Republican recalcitrance. Yet nowadays, McConnell may be unable to reprise his show-saving role.

Up for reelection in Kentucky next year, McConnell faces a serious tea party challenge in the GOP primary—with die-hard conservatives in the state griping that the senator, who last year scored a 100 percent rating from the American Conservative Union, is not sufficiently right-wing. (His latest sin: supporting legislation funding the entire federal government that included appropriations related to the implementation of Obamacare.) Faced with a threat from the right, McConnell has placed his reelection campaign in the hands of Jesse Benton, an operative firmly associated with Sen. Rand Paul, a darling of Kentucky’s tea party set. Still, McConnell must fear the wrath of Paul and the Paulites, should he engage in wheeling and dealing that results in any accords that offend the sensibilities of the tea partiers. Caught between Rand Paul and the White House, one of the most powerful and sly politicians in Washington has little room to work his behind-closed-doors magic.

Let’s examine the recent past. At the end of 2010, after the Republicans seized control of the House and boosted their numbers in the Senate, Obama and Congress had to figure out what to do about the expiring Bush tax cuts. The president wanted to kill the Bush tax breaks for the rich and continue the lower rates for middle- and low-income taxpayers. The Republicans resisted decoupling the tax cuts for the well-to-do from those for everyone else. It was a game of chicken, though Obama was reluctant to stare down the GOPers, if that meant middle-class Americans could be hit by a tax hike that would slow the fragile economic recovery underway.

To much of the politerati, the fight appeared binary; one side would have to blink. But Obama saw an opportunity. He could turn a tax cut compromise into a second stimulus by yielding on the high-end tax cuts, as long as the GOP would accept a payroll tax cut and extensions of unemployment benefits and other tax cuts that helped middle- and low-income earners. He tasked Vice President Joe Biden to forge an agreement with McConnell, his former Senate colleague. After a few tough days of negotiations—McConnell insisted on a big break in the estate tax for rich Americans—a compromise was reached that continued the Bush tax cuts for two years but that also yielded Obama a second stimulus of $238 billion. It was not a bad deal for the White House—or the economy.

The following summer, another crunch point loomed. The United States was about to hit the debt ceiling, and House Republicans, who now controlled the lower chamber, were insisting that they wouldn’t allow the US government to pay the bills that had been racked up by Congress, unless Obama agreed to deep spending cuts. Obama used this crisis to try to negotiate a so-called grand bargain with House and Senate Republicans: The Democrats would agree to cuts in entitlements if the Republicans would allow tax rates to go up for the rich. The White House spent weeks negotiating with House Speaker John Boehner, but the Ohio Republican could not swing his tea-party-dominated caucus behind such a deal. And the clock was ticking down. On the weekend before the debt ceiling bomb would detonate, after it seemed Obama had run out of options, McConnell called Biden to see what could be worked out. A flurry of calls between the vice president and the minority leader quickly produced the outline of a compromise, and when these talks hit a last-minute snag involving military spending, McConnell proposed an accounting sleight-of-hand that fixed the problem. The deal, an ugly deal, was done, but a financial crisis was averted.

Several months later, at the end of 2011, Obama once again was eyeball-to-eyeball with the House Republicans. At issue was whether to extend the payroll tax cut negotiated by Biden and McConnell a year earlier, as well as continuing unemployment benefits. Without the tax cut extension, 160 million Americans would be socked by a 2-percentage-point increase in their taxes. The House Rs refused to endorse a simple extension and demanded spending cuts as the price for going along. With time running out, the Senate passed a short-term continuation, but the House tea partiers refused to budge. Enter McConnell. In a rare jab at Boehner and the House Republicans, he publicly urged the lower chamber’s GOPers to pass the short-term extension. (Most likely, he leaned on Boehner in private, as well.) With other Senate Republicans dumping on the House Republicans—the senators feared their House comrades were handing Obama a political issue just as the 2012 campaign season was starting—Boehner relented. A short-term extension was passed, and two months later a full extension was approved by Congress with little fuss. In this episode, McConnell had again come across as the reasonable adult within the GOP leadership. His demand had made it tough for House conservatives to hold the line.

A year later, with Washington heading toward the niftily-named fiscal cliff, McConnell engaged in an encore performance. All the Bush tax rates were set to expire at the start of 2013 and automatic budget cuts known as sequestration (which were part of the 2011 debt ceiling deal) would hit. Raising taxes on middle-class and low-income Americans while cutting back on government demand would likely be a blow to the still slowly recovering economy. In the weeks before the January 1 deadline, Obama and Boehner could not hammer out a deal, especially after House Republicans would not support the speaker’s own bargaining position. (Meanwhile, Obama had ticked off his Democratic colleagues by offering to apply a less generous measure of inflation to Social Security benefits and retaining the Bush tax cuts for people earning up to $400,000 a year, instead of $250,000.)

With negotiations between Obama and Boehner at a standstill—and talks between McConnell and Senate Majority Leader Harry Reid stalled—McConnell, with 35 hours left before the deadline, tried to reach Biden. When Biden called him back, the senator drawled, “Does anyone down there know how to make a deal?” With Obama’s approval, Biden and his aides began working out the details with McConnell and his staffers. In a series of phone calls, the two sides cobbled together a small-scale compromise: The sequester cuts would occur but would be delayed by two months, taxes would go up permanently on people making more than $400,000, Social Security would not be changed, and unemployment benefits would be extended.

The Biden-McConnell agreement passed the Senate, with only three Democrats and five Republicans opposing it. And the House approved it 257 to 167, with Boehner supporting the package but tea partiers howling. The most notable opponent, as far as McConnell was concerned, was Rand Paul, who decried the deal: “I object to increasing spending and increasing taxes. That’s really the real deal killer for me.”

Paul’s denouncement came months before a tea partier named Matt Bevin entered the GOP primary race against McConnell. Bevin is seeking to whip up Kentucky voters who rallied behind Paul, when Paul challenged and defeated McConnell’s hand-picked choice for the GOP Senate nomination in 2010. On his website, Bevin uses Paul-like rhetoric to accuse McConnell of betraying the conservative cause: “I’m tired of seeing McConnell talk a big conservative game, but then constantly work to undermine conservatives when it really counts…Every time conservatives need him to stand strong, Mitch McConnell caves like the establishment puppet he is.”

Having watched longtime Senate veterans and mainline GOP politicians fall to tea party challenges in primary races, McConnell, who regularly polls low in his home state, has to mind his right flank assiduously. He must keep Bevin at bay. That means not providing grassroots conservatives any reason to doubt his conservatism—and not alienating Rand Paul. And he has recently demonstrated his willingness to let his dog be wagged by the Paul/Bevin tail. When Obama was pushing Congress to authorize a limited strike against the Assad regime in Syria for its supposed use of chemical weapons, McConnell refused to voice an opinion, even as Boehner rallied behind Obama. After dithering for days—while Rand Paul was leading the charge against the possible attack—McConnell finally declared his opposition, with language that echoed Paul’s critique. (What a coincidence.) And this week, McConnell vowed that GOPers would use the coming debt ceiling duel as “leverage” to  extract spending concessions from Obama.

As Washington contends with a possible government shutdown and yet another debt ceiling tussle, if McConnell picks up the phone and calls Biden for another round of let’s make a deal, he will fuel Bevin’s charge that McConnell is an establishment player ready to sell out diehard conservatives. And there’s probably no bargain McConnell could fashion with the White House that will not offend Paul’s libertarian reflexes. It may well be that Obama will gain politically if congressional Republicans cause a government shutdown or a debt-ceiling-related financial crisis. (The conservative editorialists of the Wall Street Journal have beseeched the tea party radicals to abandon their defund-Obamacare crusade.) But the most prominent dealmaker left among Washington’s Republicans has been hogtied. Consequently, Obama might have to make it through the coming high-stakes battles without much help from the wily McConnell. And Biden shouldn’t be waiting by the phone.