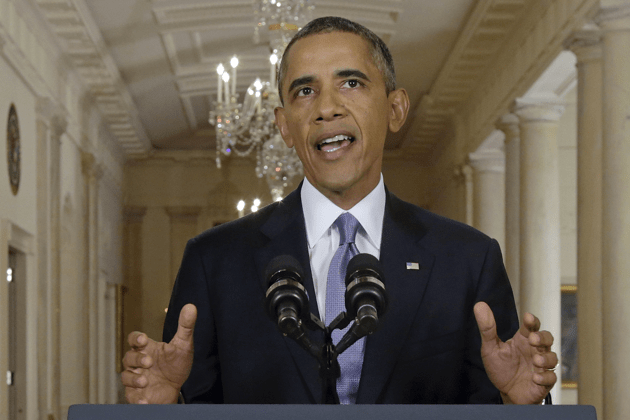 On Monday afternoon, President Barack Obama delivered a speech from the Rose Garden to mark the fifth anniversary of the 2008 financial meltdown. Much of it was a warning to the House Republicans who are threatening to throw the country into default if Democrats don’t agree to delay Obamacare. But the president, who shared the stage with a dozen or so Americans who had lost homes and jobs and have since recovered, also took the occasion to run through a highlight reel of the measures the administration took to pull the US out of the financial crisis. And the White House released an accompanying report Sunday touting the progress his administration and Congress had made in reining in risky gambling by Wall Street and helping struggling homeowners. The president glossed over a few important facts, though.

The administration and Congress have indeed made significant advances in protecting Americans from another crisis. The administration’s report lists some of the most important advances so far. Some $245 billion was injected into floundering banks through the politically unpopular TARP bailout program, and yet more than 100 percent of that has been paid back. The administration forced major banks to raise $80 billion in emergency capital to fall back on in the case of another meltdown. Home prices are on the rise. The big three automakers, which received a controversial taxpayer bailout in 2009, have been profitable since 2011 and are gaining market share for the first time in over 20 years.

At the same time, the president admitted that we still have a long way to go to full recovery, and vowed to “spend every moment of every day I have left fighting to restore security and opportunity for the middle class.” Here are five aspects of the still shaky economic recovery that the administration still has to work on—and that were absent from Obama’s speech:

Weak employment: The administration’s financial crisis anniversary report touts “strong employment growth” since the recession: “[A]s of July 2013, the economy had added private sector jobs for 42 consecutive months,” it says. But the portion of Americans with a job or looking for a job is at its lowest level since 1978. Last month, the unemployment rate dropped to 7.3 percent, but mostly because more Americans stopped looking for work and so were not officially counted as unemployed by the government.

Though the administration initially allocated $75 billion for HAMP foreclosure relief, only about $7 billion has been disbursed, according to the Treasury Department. And a total of just $12 billion is expected to be disbursed by end of program. Meanwhile, more than 20 percent of mortgages remain underwater.

Household wealth non-recovery: American households lost between $16 and $19 trillion in household wealth as a result of the financial crisis. But “by the end of 2012,” the report says, “Americans had recovered $14.7 trillion of aggregate household net worth.” The administration admits that “there is still far to go” and “progress has been uneven.” As we noted earlier this year, here is just how uneven it has been:

The financial crisis destroyed some $16 trillion in household wealth [according to a May Federal Reserve report]. Americans have only recovered 45 percent of that amount, according to the Fed report. But when you break down that wealth recovery by income level, it gets worse. The Fed estimates that 62 percent of that wealth people have regained since the depths of the recession has come in the form of higher stock prices. And 80 percent of stock wealth is held by people in the top 10 percent of the income distribution. “Recent gains in the stock market mean that the recovery of wealth is nearly complete for white and Asian households and older Americans,” Ylan Mui reported at the Washington Post…

But many families have not experienced any recovery at all, and some are still losing wealth, William Emmons, chief economist at the St. Louis Fed’s Center for Household Financial Stability, told the Post. “The families that lost homes are not the families making money off stocks,” Mui notes.

Too Big To Fail: Still with us?: The report claims that Congress and the administration have ended “too big to fail”—the need for the government to bail out giant banks because their failure would damage the entire economy. But many financial reform advocates say not so fast. Last week, Sen. Elizabeth Warren (D-Mass.) noted in a speech marking the anniversary of the financial crisis that even though the 2010 Dodd-Frank financial reform law curbs the size of the largest banks, banking regulators have still not crafted a large portion of that law into enforceable regulations. “The biggest banks are bigger than ever,” she said. “The risks to the system has grown and the market distortions have continued… If Dodd-Frank gives the regulators the tools to end too big to fail, that’s great, pick them up and use them.”

Shadow banking still kind of in the shadows: The report also cites significant gains in reigning in the shadowy derivatives market—which was unregulated before the crisis. (Derivatives are financial instruments with values derived from underlying variables, such as crop prices or interest rates.) But lots of regulations on derivatives required by Dodd-Frank have been delayed and watered down. One of the law’s provisions, for example, which would prohibit banks from making risky trades with taxpayer-backed money, was delayed this summer for two more years. In the meantime, Congress is trying to further weaken the already loophole-filled rule.