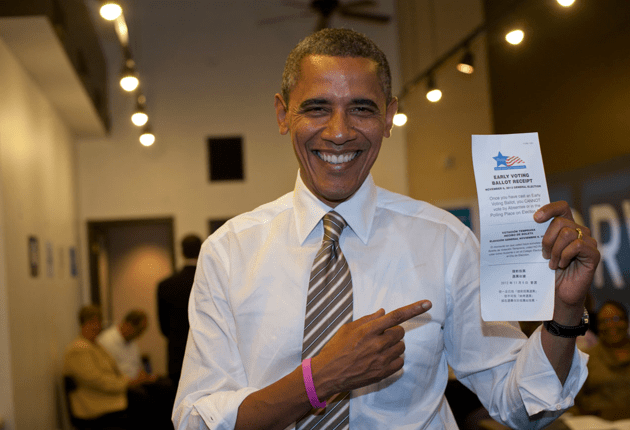 Update, September 25: The White House responded to this story on Tuesday, affirming to Talking Points Memo that Americans will be able to register to vote when applying for insurance through Obamacare. But the administration did not clarify whether it will fully comply with the federal law requiring that navigators, the people hired to help Americans sign up for coverage through the exchanges, be trained to help applicants with voter registration.

Republicans have slammed Obamacare’s health care exchanges—where uninsured Americans can apply for subsidized coverage—as “Democrat Party front organizations.” That’s because the millions of mostly low-income and minority applicants—who tend to vote Democratic—will be asked if they want to register to vote when they sign up for insurance through the exchanges, which open up next week. The administration has been adamant that it will not cede to the GOP on this provision. Until now.

The 1993 National Voter Registration Act (NVRA), known as the Motor Voter law, says that DMVs and other state agencies that provide public assistance have to provide voter registration services. The Obama administration has said that means that both the state-run exchanges, and the federally-run exchanges that are being rolled out in states where Republican governors have refused to set them up, will have to comply with the Motor Voter law. But now it appears that the Department of Health and Human Services (HHS) is wavering on whether it will require the 35 federally-run exchanges to offer full voter registration services, according to a recent report by the left-leaning policy shop Demos and the voting rights organization Project Vote. Congress also recently launched an inquiry into the matter, Hill staffers told Mother Jones.

GOP opposition to signing up new voters through the health insurance exchanges has been fierce. Right-wing talk show yeller Rush Limbaugh said in June that it shows “the purpose of Obamacare… It’s about building a permanent, undefeatable, always-funded Democrat majority.” In March, Republicans on the House Ways and Means committee worried about how Obama-friendly “associations like the now-defunct ACORN”—such as FamiliesUSA and AARP that the administration will fund to help sign up the uninsured—would use applicants’ voting information. Rep. Charles Boustany (R-La.) wrote a letter to HHS this past spring, charging that the health care law “does not give your Department an interest in whether individual Americans choose to vote,” and asking HHS to provide justification for including voter registration questions in health insurance applications.

Some conservative legal scholars have argued that since the exchanges operate as a marketplace for private insurance, they don’t fall under the Motor Voter law’s definition of social service providers, and therefore shouldn’t be linked to voting. But the exchanges also provide government subsidies, and as recently as April, HHS made it clear that all health care exchanges would need to provide voter registration services.

Now it seems HHS is not so certain.

In August, Demos and Project Vote released a report stating that HHS was not planning to provide the voter registration services that the Motor Voter law requires. These services include training navigators, the people hired to help Americans sign up for coverage through the exchanges, to help applicants with voter registration. Demos noted in the report that HHS intended to merely provide a link in the insurance application to the federal voter registration mail-in form. When contacted for this story, Demos and Project Vote said they are now uncertain about the administration’s position on enforcing the Motor Voter law, and added that they were considering taking the report down from Project Vote’s website. (One version was removed; another remains.)

“If it’s true” that HHS has reversed its position, “it would be very disheartening.”

Demos and Project Vote declined to provide details about how they obtained the information that HHS was backtracking on the voter registration provision, but the report spurred Congress to ask HHS for a definitive answer on whether or not the department will fully enforce Motor Voter for federally-run exchanges, according to Hill staffers. (HHS did not comment for this story. Nor did the White House.)

“If it’s true” that HHS has reversed its position, “it would be very disheartening,” says Gilda Daniels, a law professor at the University of Baltimore who worked at the Justice Department when it first started enforcing the Motor Voter law. “The impact of not asking people who come to HHS offices if they’d like to register to vote could certainly be massive in regard to reaching a particular socio-economic group.” The 24 million mostly low-income and minority uninsured folks who are expected to purchase insurance through the exchanges are particularly likely to be unregistered to vote. Not having health insurance is one of the strongest indicators that someone will not vote, according to Lake Research, a political strategy research firm.

Only 65 percent of eligible voters in the US are registered to vote (and Republican legislatures across the country have introduced scores of new voting laws in recent years making it even harder for poor, minority, and young people to vote). Some 140 million people have registered to vote through the Motor Voter law since it was enacted.

If HHS ultimately declines to fully enforce the Motor Voter law for federally-run exchanges, the decision would be controversial to say the least. After all, the administration has stated that it will require state-run exchanges to set up voter registration services. If HHS doesn’t comply, “States [will be] required to meet a standard that HHS itself is unwilling to meet,” the Demos report points out. And if HHS were to officially reverse its stance, its lawyer—who is part of the Justice Department, which defends federal voting laws—would have to approve a position that it is supposed to litigate against. (The DOJ did not comment for this story.)

“It sounds like there’s not a lot of coordination” within the administration, Daniels says.

“If you’re wondering why Republicans are going DEFCON 1 over Obamacare, they’ve got a good reason to.”

It could be that HHS it is planning to enforce the Motor Voter law, but only after the exchanges are up and running and the political furor dies down, says Lawrence Jacobs, a political science professor at the University of Minnesota and author of “Health Care Reform and American Politics.” The administration is trying to roll out the massive health care law “under the most adverse circumstances that we’ve probably ever seen in terms of social welfare reform,” he says, and may want to sidestep another clash with the GOP. “The general theme from…the Obama administration is ‘Lets turn on the light. Lets get this thing up and running first.’ HHS could be thinking ‘we’ll come back to this,'” Jacobs says.

The final verdict on whether health exchanges help Americans register to vote may have to come from the courts, though voting rights experts such as the folks at Demos and Project Vote—as well as the administration, until recently—are certain that the exchanges are legally required to comply with Motor Voter. “In the long run, they’re going to be doing it,” Lisa Danetz, a voting rights lawyer at Demos, told USA Today in August. “It’s what the law requires.”

Adding more Americans to the voter rolls through health exchanges is important beyond just raw enfranchisement numbers, Jacobs says. Obamacare, coupled with increased voter registration, could change “American democracy,” he says. There is precedent for this. After the passage of the Social Security Act in 1935, voter turnout rates for seniors rose, while turnout rates for other age groups dropped. Between 1958 and 1998 alone, midterm turnout among seniors rose from 66 percent to 73 percent. Today, seniors vote at an historically high rate. “The passage of Social Security gave seniors resources and motivation and identity as beneficiaries that got them to the polls,” Jacobs explains.

The same scenario will likely play out among poor and minority voters who often feel disconnected from politics and government, he adds. They will soon receive “tangible benefits” through the Affordable Care Act, Jacobs says, and will be motivated to hold onto those benefits by voting. “Obamacare will define a new constituency,” he says.

“So if you’re wondering why Republicans are going DEFCON 1 over Obamacare,” he adds, “they’ve got a good reason to.”