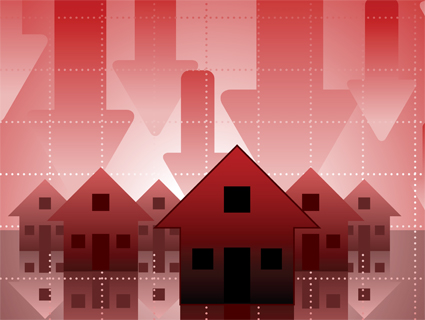 The outcome of the foreclosure crisis—and the fate of many investors who bet on it—may hinge upon a city council vote tonight in a little-known working-class suburb (see update below). The Northern California town of Richmond (population: 105,000) will decide whether it wants to become first city in the country to use eminent domain to rid itself of underwater mortgages. The securities industry has threatened to make life miserable for Richmond and its residents if they move ahead with the plan.

In late July, Richmond sent letters to 32 banks and other mortgage holders, offering to buy 624 underwater mortgages at discounts to the homes’ value. None of the offers were accepted. Richmond must now decide whether it will use eminent domain—a power more often used to build roads or shopping malls—to seize the homes, paying a court-determined fair market value.

Richmond would carry out the purchases with the help of Mortgage Resolution Partners, an advisory firm run by a politically connected group of investors. (Read my original story on MRP’s eminent-domain plans here.) After Richmond seizes the loans, new lenders arranged by MRP would step in and essentially refinance them. The borrowers would stay in their homes, and the new loans would reflect the current value of the properties. In this scenario, a family in Richmond that bought a $300,000 house that’s now worth $200,000 would see its monthly payments decrease by $300 to $800.

For more than a year now, MRP’s chairman, Steven Gluckstern, has been trying and failing to convince some of the cities worst hit by the foreclosure crisis to adopt his eminent domain plan. Politicians in San Bernadino, Salinas, and about a dozen other towns flirted with the idea to varying degrees before getting cold feet. But Richmond is supposed to be different: “We’re not willing to back down on this,” Richmond’s Mayor Gayle McLaughlin, a former schoolteacher, told the New York Times in July. “They can put forward as much pressure as they would like, but I am very committed to this program and I’ve very committed to the well-being of our neighborhoods.” 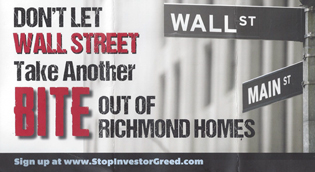 An anti-MRP mailer from the Contra Costa Association of Realtors

That, however, was before the Contra Costa County Association of Realtors began blanketing the town with misleading mailers. “Don’t let Wall Street take another bite out of Richmond homes,” one flyer admonishes. There’s a grain of truth to the claim—Gluckstern himself is a former Lehman Brothers investment banker. But the fact that Wall Street trade groups actually oppose MRP’s plan may be lost on average voters.

The securities industry recently sued Richmond in federal court seeking a preemptive injunction against its eminent-domain strategy. A judge will hear that case on Thursday.

Tonight, assuming it doesn’t delay the decision, the Richmond City Council will vote to either proceed with the plan, terminate it, or to move it forward only if MRP can indemnify the town against all unintended side effects—something Gluckstern says is impossible. “In life, there is no such thing as a free lunch,” he says. “You’ve got to weigh whatever small likelihood of a potential loss against the upside.”

UPDATE: At a meeting attended by hundreds of residents on Tuesday night, the Richmond City Council voted 4-3 to proceed with the MRP plan. Richmond will now form a Joint Powers Authority to administer the program along with any other cities that want to team up with MRP.

The vote comes amidst an active grassroots campaign in support of the plan by labor unions and left-leaning consumer groups such as the Alliance for Californians for Community Empowerment (ACCE) and the Home Defenders League.

At a Monday press conference, San Francisco Supervisor David Campos announced that he will propose a resolution before the city’s Board of Supervisors expressing support for the Richmond plan and calling on San Francisco to pursue a similar foreclosure-reduction strategy.