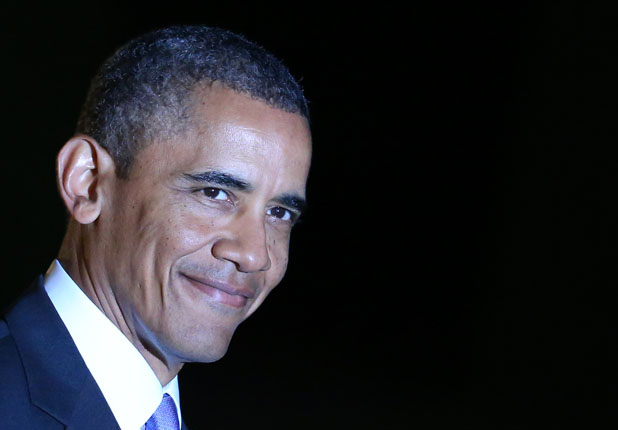 The conventional view in Washington these days is that President Barack Obama is not having such a great second term and might already be suffering a bit of lame duckery. After all, he failed to overcome NRA and GOP opposition to modest gun safety legislation after the horrific Newtown massacre, and his immigration reform push has crashed into that brick wall known as the Republican-controlled House of Representatives. But here’s a Slate pitch: Obama is the most wily tactician in the nation’s capital since Lyndon Johnson.

Consider what Obama has recently done to two of his most bothersome foes: Vladimir Putin and John Boehner. Faced with the thorny question of how to respond to the Bashar al-Assad’s presumed use of chemical weapons in Syria, Obama sent conflicting messages at first. He dispatched Secretary of State John Kerry to deliver a hawkish message that seemed to suggest a retaliatory but limited strike against the regime was imminent, but then Obama surprisingly announced he would seek authorization from Congress for such an attack, fully realizing that such a move would take weeks to pull off—that is, if he could rally sufficient votes.

Having sparked a contentious debate on Capitol Hill—with opposition to a strike on the rise—Obama appeared to have led himself into a political quagmire. He got perilously close to what could have been an embarrassing defeat. But before Congress could vote, this mess yielded a beneficial outcome: it drew Putin into co-ownership of the chemical weapons problem. As Obama failed to gain support on the Hill for an attack on the Assad regime, Putin leapt into the fray to broker a deal that would supposedly end with Syria’s chemical weapons under international control.

Whether by design or dumb luck, Obama succeeded in placing Putin on the hook for Assad’s chemical weapons. The Russian leader was now acknowledging that Assad’s stockpile was indeed a problem and, more important, assuming the role of guarantor. Certainly, the subsequent negotiations would be difficult, with Assad likely to slow-walk and obfuscate. But having sucked Putin into the process, Obama had increased the odds of achieving his chief goal: preventing the further use of chemical weapons by the regime. With Russia-brokered talks underway, could Assad deploy chemical weapons again? Doing so would risk embarrassing (and maybe angering) Putin, Assad’s top benefactor.

Hawks on Capitol Hill and elsewhere were not happy that Obama traded a military attack for talks that are likely to be frustrating. But Obama’s original aim was not negotiating a chemical weapons accord with Assad but a more narrow goal: stopping another chemical weapons attack. With Putin, perhaps Obama’s most pesky antagonist on the world stage, now invested in an international effort to remove Assad’s chemical weapons from the Syrian tyrant’s control, Obama may well have succeeded. (One side benefit might be a détente with Iran.)

Back home, Obama has placed House Speaker Boehner in a different sort of hot seat. By declining to negotiate with Boehner about defunding Obamacare in order to prevent a government shutdown, the president has fueled the ongoing civil war within GOP ranks. True, this pitched battle would wage with or without Obama, as tea partiers try to hold the government hostage in order to destroy Obama’s health care program and less extreme Republicans contend that this act of political terrorism will backfire against their party. But sometimes in politics, it takes discipline to stand back and not get in the way when an opponent is self-immolating.

Obama may start talking with congressional Republicans later this week, but he’s given the Rs plenty of time and room for their internecine squabbling. In past years, Obama eschewed standing by while GOPers engaged in reckless behavior that could result in a shutdown or a financial crisis. At those times, he argued, reasonably, that he had a responsibility to ensure government operations would continue and the debt ceiling would be lifted to avert what could be serious blows to the economic recovery. And he devoted significant energy toward cutting deals with the Republicans, even endeavoring to use those occasions as opportunities to reach a so-called grand bargain on spending and taxes. But at the same time, he resolved to limit the openings for future GOP hostage-taking.

After the debt ceiling showdown of 2011, Obama repeatedly stated he would no longer negotiate future boosts in the debt ceiling. With another debt ceiling tussle coming in weeks, Obama has continued to stick to this red line. And with the government due to run out of money for its operations at the end of the month, he has not rushed to draw Boehner (or Senate GOP leader Mitch McConnell) into budget talks. He’s craftily letting the Republicans brawl amongst themselves—bickering over who’s a real conservative or not—as polls repeatedly suggest that the GOPers can expect to receive most of the public’s scorn should the government come to a congressionally inflicted standstill.

Syria and Washington’s budget woes are problems that are far from being solved. And Obama still has not demonstrated how he can overcome the serious challenges he confronts in achieving other parts of his agenda: immigration, gun safety, raising the minimum wage, expanding Head Start, and boosting employment. Moreover, implementing and selling Obamacare—with the new health insurance exchanges coming on line October 1—remains a priority and tough task for the White House, which has not figured out how to win over the public on this front. Obama’s skills as a strategist have often been discounted by the politerati—in part because Obama and his team have done a poor job of promoting his successes, which sometimes are nuanced and complicated. But in recent weeks, the president has displayed his ability to outmaneuver opponents. In the days ahead, he will have plenty of opportunity to do so again.