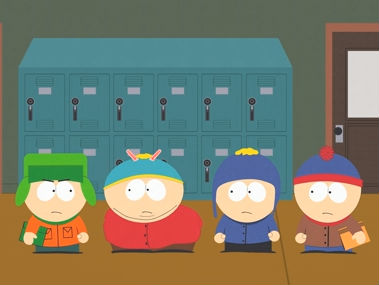 On Wednesday night, South Park returns for its 17th season on Comedy Central. The animated comedy series’ creators Trey Parker and Matt Stone—and the rest of the South Park writing staff—have a track record of mining major news stories for plot and satirical content. (Each episode is made within a high-pressure six days right before airing, which allows the show to stay relevant in news cycles.) In their latest season premiere, they address the controversy surrounding revelations of the National Security Agency‘s spying programs.

“I should be careful; Kyle‘s here and I think he might work for the NSA,” says the corpulent, Jew-baiting Eric Cartman.

Cartman then reminds his friends that the US government is capable of monitoring all the their email activity, as well as their Twitter accounts. For this reason, Cartman only uses “Shitter,” a new microblogging service that reads his mind and posts his thoughts directly to the Shitter website without the NSA snooping on him. “The government won’t respect my privacy,” Cartman says. He later admits that that there are so far only two people on Shitter: Cartman and actor/future MSNBC host Alec Baldwin (whom Parker and Stone have lampooned in the past).

According to the synopsis, Cartman “wants to hold the government accountable for secretly monitoring all of his personal information” and somehow manages to infiltrate the NSA. (The NSA did not respond to Mother Jones‘ request for comment regarding South Park.)

South Park is no stranger to exploring or poking fun at hot-button issues. The show and its creators have what could arguably be labeled a libertarian streak. (Author and blogger Andrew Sullivan famously coined the term “South Park Republican” in 2001, and ostensibly right-leaning quotes attributed to Parker and Stone, such as “I hate conservatives, but I really fucking hate liberals,” help fuel the series’ reputation as a libertarian-friendly haven for politically incorrect humor.) Though Parker and Stone have a soft spot for targeting left orthodoxies, including Hollywood’s limousine liberalism to anti-tobacco campaigns, they have a long history of inserting their characters into national political discussions in the name of mocking both the left and right in equal measure. Two years ago, South Park parodied Occupy Wall Street in an episode called “1%.” The show has taken on conservative anti-immigration hardliners. The crew has had their fun with Al Gore and his environmental activism. Glenn Beck and insane right-wing talk radio have gotten the South Park treatment. There was that amazing art-imitates-life moment involving Blackwater and hundreds of AK-47s. The series was highly praised and honored for slamming the media coverage of the Terri Schiavo case in 2005.

The South Park team’s penchant for controversy, political and otherwise, has made them targets for a diverse array of foes. Not only has a Canadian judge attacked the show’s worth and morality, but Parker and Stone were subjected to thinly veiled death threats from Muslim extremists over their depictions of the Prophet Muhammad.

So, yes, the series has a rich political history. An episode satirizing domestic spying programs is merely a more recent example.