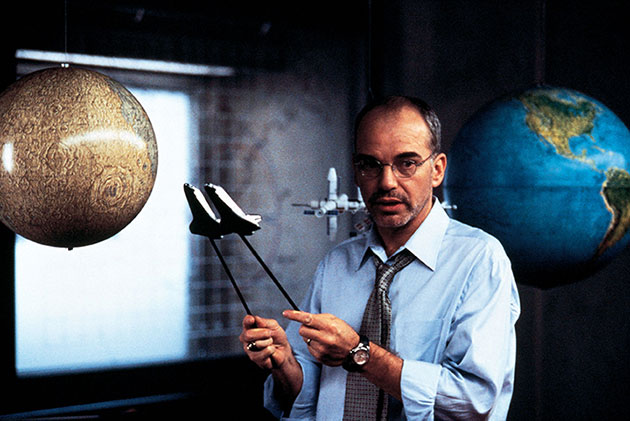 This article was originally published by the Center for Public Integrity.

When geophysicist H. Jay Melosh attended a meeting of American and ex-Soviet nuclear weapons designers in May 1995, he was surprised by how eager the Cold Warriors were to work together against an unlikely but dangerous extraterrestrial threat: asteroids on a collision course with Earth.

“It was a really bizarre thing to see that these weapons designers were willing to work together—to build the biggest bombs ever,” said Melosh, an expert in space impacts who has an asteroid named after him.

Ever since, he has been pushing back against scientists who still support the nuclear option, arguing that a non-nuclear solution—diverting asteroids by hitting them with battering rams—is both possible and far less dangerous.

But Melosh’s campaign suffered a setback last month when Energy Secretary Ernest Moniz signed an agreement with Russia that could open the door to new collaboration between nuclear weapons scientists in everything from plutonium-fueled reactors to lasers and explosives research. A September 16 DOE announcement cited “defense from asteroids” as one potential area of study.

President Barack Obama has committed the United States to seeking a world without nuclear weapons, but NASA is spending hundreds of thousands of dollars a year to study their use against asteroids and the US nuclear weapons labs appear to be itching to work with their Russian colleagues on the problem.

Weapon makers in the United States and Russia are citing the asteroid threat as a reason to hold onto—or to build—very large yield nuclear explosives.

Moreover, weaponeers in both countries are citing the asteroid threat as a reason to hold onto—or to build—very large yield nuclear explosives, which have declining terrestrial justification.

Depending on the nature of the work, it could run afoul of several international pacts, including the 1967 Outer Space Treaty signed by 129 countries, which prohibits deploying nuclear weapons in space. Some experts worry that radioactive debris from blasting an asteroid could itself wreak havoc on Earth.

To some critics, the idea smacks of bad science fiction. Exhibit A is the 1998 Bruce Willis action film Armageddon, which shows a team of deep-sea oil drillers landing on an Earth-bound asteroid, planting a nuclear warhead and neatly blowing the rock in halves that just miss Earth. Film critic Kenneth Turan called it “sporadically watchable.”

In real life, Bong Wie, the director of Iowa State University, says he has a three-year, $600,000 grant from the National Aeronautics and Space Administration to design a “hypervelocity nuclear interceptor system,” basically an ICBM-borne warhead fitted with a battering ram.

The ram would separate from the bomb before impact, gouging a crater in the asteroid so the bomb could then blast it to bits.

Keith Holsapple, an engineering professor at the University of Washington, meanwhile says NASA has given him a five-year, $1.25 million research grant to study how either an impact device or a nuclear explosion could deflect an Earth-bound asteroid from its path.

But the leading supporter of the nuclear solution in the United States is probably David S.P. Dearborn, a research physicist and weapons designer at Lawrence Livermore National Laboratory in California who is presently helping refurbish the US nuclear arsenal.

Wie called Dearborn a senior figure among scientists studying the nuclear option. “I am just following in his footsteps,” he said.

Dearborn said that he was offended years ago when he other researchers told the media that nuclear weapons simply couldn’t work against asteroids. “That’s just not true,” he said, calling these claims scientifically “indefensible.”

For years, Dearborn worked to refute the skeptics on his own time. Since 2012 he said he and a colleague have had a grant from Livermore worth several hundred thousand dollars to work on the project part time, he said. He estimated that about a dozen other scientists have studied aspects of the approach at US weapons labs. 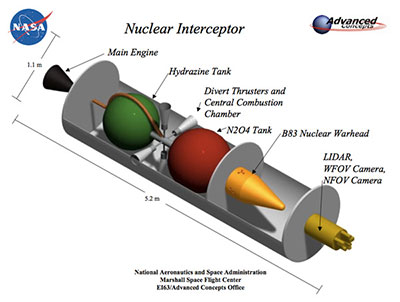 A NASA diagram of an asteroid-busting “nuclear interceptor” NASA

Nuclear weapons could be used in two ways, he says. When the collision is still a decade or longer away, a “standoff” nuclear blast could knock the asteroid off course. When the time to impact is short, he says, defenders would try to blow up the asteroid.

“You fragment it with enough force so that the pieces spread out,” and most miss the Earth, he says. Small bits of rock would burn up in the atmosphere.

There would be no need to build new weapons or test old ones, he said. But shattering a large asteroid close to hitting Earth would probably require a weapon with the yield of about a megaton, one million tons of TNT, he said, which is roughly the power of the largest weapon in the current US arsenal.

Meanwhile, Dearborn said, he hopes to compare notes with his Russian counterparts, saying weapons scientists are in the best position to evaluate nuclear planetary defense schemes.

“A truly accurate understanding…of the impulse caused by a standoff nuclear explosion depends on having access to information that is available only to the nuclear laboratories,” he wrote in an email.

Mark Boslough, a physicist at Sandia National Laboratories in New Mexico, another weapons lab, has worked part-time in the past modeling the effects of nuclear blasts on asteroids and agrees that on short notice nuclear “really is the only option.”

Melosh disagrees. He was co-investigator on a 2005 NASA mission known as Deep Impact, which launched an 820-pound copper-covered battering ram that gouged a crater out of the comet Tempel 1 in 2005. He says that 90 percent of the biggest asteroids have already been found and ruled out as a near-term threat, demonstrating there is time for find suitable, non-nuclear alternatives—such as hitting asteroids with rams, zapping them with lasers, tugging them off a kamikaze trajectory, or deflecting them with solar sails.

The actual 47-page US-Russian agreement—which the Energy agency has not released but the Center for Public Integrity obtained—does not mention asteroids and instead lays out broad areas for potential cooperation between nuclear weapons complexes on civilian nuclear power, including plutonium-fueled breeder reactor research, and other nuclear-related technologies.

“We are making the implementation of the agreement a priority and will be reviewing possible projects soon,” Energy department spokeswoman Keri Fulton said in an email, after declining to address the mention of asteroid defense.

David Wright of the Union of Concerned Scientists’ Global Security Program says he hopes asteroid defense work will not become a “jobs program” for weapons scientists.

But according to a former DOE official who stays in close touch with the agency, an important proponent for new, joint work on the asteroid threat between US and Russian nuclear weapons scientists was Donald L. Cook, deputy administrator at the Energy Department’s National Nuclear Security Administration, where he oversees the nation’s weapons labs. Cook is a former chief executive of Britain’s Atomic Weapons Establishment, and former administrator at Sandia National Laboratories in New Mexico, which makes the nonnuclear components for nuclear weapons.

Fulton said she could neither confirm nor deny his role in the deliberations.

The Russians, for their part, are also weighing a nuclear response to the asteroid threat. “In the opinion of Oleg Shubin, a departmental director at Rosatom, nonnuclear ways of deflecting and destroying Earth-bound asteroids may be exotic but ineffective,” the state-owned Russian news service RIA Novosti reported on March 25.

Christopher Chyba, a Princeton nonproliferation expert who sits on the White House’s 18-member Council of Advisors on Science and Technology, said although no Earth-colliders have so far been found so far, there is still an “irreducible” threat from very large asteroids.

David Wright, co-director of the Union of Concerned Scientists’ Global Security Program, said he hoped any joint asteroid defense work would not become a “jobs program” for weapons scientists.

“When you’ve got the weapons labs sort of pushing for this in the various countries, it starts to make me feel a little uneasy,” he said. “Which doesn’t mean it’s not a legitimate thing to do, but you want to know it’s being done for legitimate reasons.”

The Center for Public Integrity is a nonprofit, nonpartisan investigative news organization in Washington, DC. For more of its stories on this topic go to publicintegrity.org.