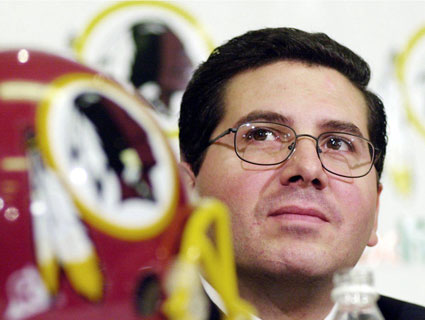 Dan Snyder, the owner of Washington’s pro football team, wrote a letter to season ticket holders yesterday to once again defend the franchise’s racist name. Snyder, who in May said he’d “never” change the moniker, focused on the team’s long history—mentioning three times that it has been in existence for 81 years—and argued that it “was never a label. It was, and continues to be, a badge of honor.” He also argued, in a bit of marketing wizardry, that the name “is a symbol of everything we stand for: strength, courage, pride, and respect.”

Snyder went beyond lauding the positive symbolism of the [Redacted] brand, though. Like ESPN columnist Rick Reilly before him, Snyder cited a poll from the Annenberg Public Policy Center that found that 90 percent of Native Americans didn’t find the team’s name offensive. He also pointed to a Richmond Times-Dispatch story in which a writer contacted three Native American tribal leaders in Virginia; none of them was offended by the name.

“I’ve listened carefully to the commentary and perspectives on all sides, and I respect the feelings of those who are offended by the team name,” Snyder wrote. “But I hope such individuals also try to respect what the name means, not only for all of us in the extended Washington Redskins family, but among Native Americans too.”

Snyder’s right—people should respect what the name means for Native Americans (and not just sensitive white journalists). After all, it has been more than two decades since American Indians suing the team over its trademark first went on the Oprah Winfrey Show to talk about Native Americans as mascots. Around the same time, Seminole and Sioux activist Michael Haney told the Chicago Tribune, “As long as white America feels that Indians are not quite human, that we can be construed as mascots or caricatures or cartoon figures, then they will never deal with the issues of education and economic development for our people.”

In that vein, here are some other powerful Native American reactions to the Washington football team’s name:

The marketing of this racial slur has had—and continues to have—very serious cultural, political, and public health consequences for my people and Native Americans everywhere.

It is clear from Mr. Snyder’s letter that he does not understand those consequences. So in the spirit of the dialogue that Mr. Snyder says he is willing to engage in, we are inviting him to join the NFL delegation in its upcoming meeting at our Homelands. During his visit, we will organize a special meeting of Oneida Nation families where Mr. Snyder can personally explain to them why he believes they deserve to be called “redskins.” He can then hear directly from them why that term is so painful.

From a July resolution by the Inter-Tribal Council of the Five Civilized Tribes (Cherokee, Chickasaw, Choctaw, Muscogee (Creek), and Seminole nations):

…the use of the term “Redskins” as the name of a franchise is derogatory and racist; and

…the term perpetuates harmful stereotypes, even if it is not intentional, and continues the damaging practice of relegating Native people to the past and as a caricature…

From a May letter to Snyder by 10 US congressmen, including Rep. Tom Cole (R-Okla.), one of two registered Native Americans in Congress:

Native Americans throughout the country consider the term “redskin” a racial, derogatory slur akin to the “N-word” among African Americans or the “W-word” among Latinos. Such offensive epithets would no doubt draw wide-spread disapproval among the NFL’s fan base.

Regarding Dan Snyder’s letter today, he’s right we shouldn’t ignore the team’s 81-year history and the origins of the name Redsk*ns. The team’s name is part of a long and ugly history rooted in racism and discrimination.

It’s the funniest thing: Where in any other arena would you see a white guy tell an ethnic group that they have no right or they have no grounds to say something’s offensive? If it were the Washington Blackskins, immediately you’d have Al Sharpton, you’d have Cornel West, you’d have all these prominent figures saying, “That is dehumanizing.” But Native Americans, we’re the only group that has to sit back and be called “PC sissies.” “Get over it…”

Even if there are certain Native Americans that say, “I don’t care—there are bigger issues,” which is a very valid argument, this campaign is part of the larger push for our human rights and dignity, across the board. Columbus Day, Cleveland Indians, cultural appropriation: We’re working diligently to be recognized as conscientious objectors. 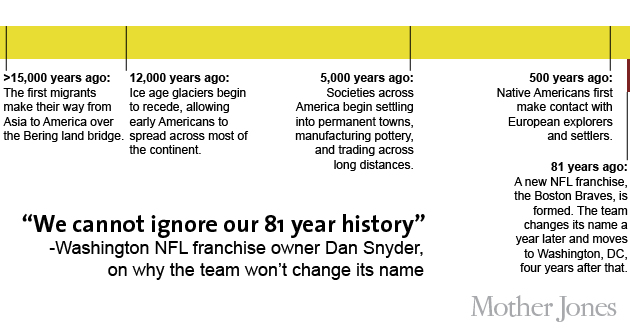 This article has been revised for clarity.