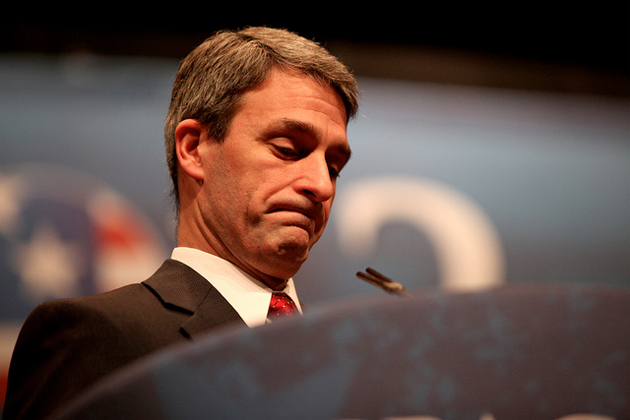 Ken Cuccinelli, the conservative attorney general of Virginia and the Republican candidate for governor in this November’s election, has filed a summary of his tax returns showing that he donated thousands of dollars in the past four years to crisis pregnancy centers, the controversial facilities that counsel pregnant women against abortions. Abortion rights advocates have criticized crisis pregnancy centers for showing women graphic simulations of abortions, providing medical misinformation, and opening offices near abortion providers in the hopes that women will confuse the two. At one of the centers Cuccinelli supported, staff told women that abortion increases their chance of breast cancer and that abortion will “haunt” them for the rest of their lives. At another Cuccinelli-backed center, employees falsely told a New York Times reporter that Margaret Sanger, an early advocate for legal abortion, was a Nazi sympathizer.

From 2008 to 2012, Cuccinelli gave two crisis pregnancy centers and one affiliated group a total of $4,038—roughly 13 percent of his overall charitable giving for those years.

Over $1,300 of that total went to AAA Women for Choice, a Manassas-area crisis pregnancy center. Organizers of an annual event to support AAA Women for Choice also raffled off a Cuccinelli-autographed Gadsden flag in April 2012, which helped raise another $3,860 for the clinic.

Volunteers and employees of NARAL Pro-Choice Virginia, the state affiliate of the national abortion rights group, visited the Manassas clinic run by AAA Women for Choice in November 2012 as part of a comprehensive investigation into the state’s crisis pregnancy centers. There, they reported, AAA Women for Choice staff showed the researcher a video depicting “a graphic model of a surgical abortion. It showed a doctor scraping out a fully formed baby, and then scraping off some of the uterine lining, which [the video] said could cause infertility or problems with a later pregnancy.” (According to the American Congress of Obstetricians and Gynecologists (ACOG), fewer than 1 percent of abortions end with major complications like infertility. Some studies show that abortion is markedly safer than pregnancy.)

The NARAL researcher also reported that an AAA Women for Choice staffer told her that having an abortion would “haunt” her. “She said, ‘Even if you have kids later on, every time you watch them growing up you will think about your abortion and the baby you could have had.'” The researcher said staff showed her a video that claimed that women who have a family history of breast cancer and who have abortions when they are younger than 18 or older than 32 “are virtually guaranteed to get breast cancer at some point.” The American Cancer Society, the National Cancer Institute, and ACOG have all dismissed the notion that there is any link between breast cancer and abortion.

A 2006 Washington Post article that surveyed the tactics of crisis pregnancy centers featured a pregnant 24-year-old college student who walked into AAA Women for Choice thinking it was the abortion clinic where she had an appointment. That student, Allyson Kirk, told the Post that clinic staff questioned her about her religious beliefs and told her that women who have abortions suffer from high rates of depression, infection, and even death. Kirk said she walked out after clinic staff showed her a video depicting a surgical abortion where the provider severed a fetus’s head.

The AAA Women for Choice website, however, does not reflect its anti-choice practices. A section of the website labeled “consider your choices” lists abortion as one of three options for pregnant women and describes several types of abortions. But the group’s facility does not offer abortions and has lobbied to make them harder to obtain. AAA Women for Choice staff have spoken in favor of laws that impose new, hard-to-meet regulatory burdens on abortion clinics with an eye towards forcing them to shut down. AAA Women director Patricia Lohman, and Darden Brock, a board member, did not reply to multiple emails asking for comments about Cuccinelli’s donations and NARAL and Post reports.

Cuccinelli also gave $20 to EMC Frontline Pregnancy Centers, an organization that operates several crisis pregnancy centers in New York City. A NARAL Pro-Choice New York investigation found that workers at EMC Frontline Pregnancy Centers routinely tell women that abortion is linked to higher rates of breast cancer. When New York Times reporter Ariel Kaminer visited the Brooklyn location of EMC in 2010, she found it in the same building as an abortion provider. “It’s easy to imagine someone spotting the generic-sounding Expectant Mother Care in the lobby directory and assuming it was a general source for reproductive information, perhaps even a medical office,” she wrote. After she received a sonogram from EMC staff, Kaminer wrote, the center’s director told her, “almost as an afterthought…that Margaret Sanger, the hero of the reproductive rights movement, had ties to the Third Reich.”

Chris Slattery, EMC’s president, defended his group’s work. Crisis pregnancy centers don’t open offices near Planned Parenthood facilities to trick women, he says. “We’re just following Planned Parenthood into the neighborhoods that they targeted.” He accused Kaminer of pushing the employee in question to talk about Sanger. “That’s irrelevant to our clients,” he says, “If a New York Times reporter wants to goad us into discussing issues, that’s another thing.” But EMC does tell women, Slattery says, that there is a link between abortion and higher rates of breast cancer. “We do tell them that, but not that women are going to absolutely get breast cancer from abortion. Nor could someone who smoked cigarettes be told they absolutely will get lung cancer,” he said. “But that information,” about a breast-cancer abortion link, “is not a determinate factor for women who are deciding whether to abort or not.”