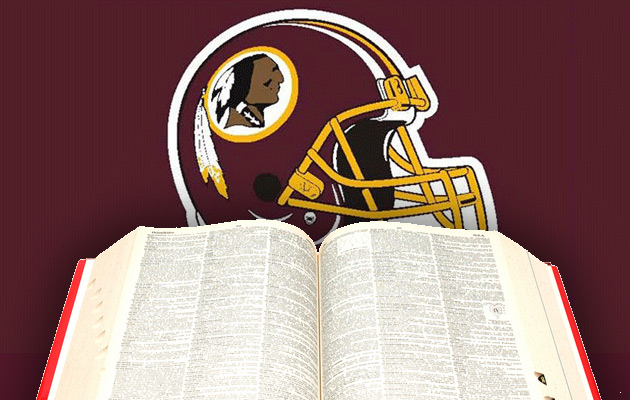 In the ongoing debate over the name of Washington’s pro football team, folks on both sides have argued about the relative offensiveness of the word “redskin” over time. Team owner Dan Synder insists the R-word is a long-standing term of respect for Native Americans, saying in a letter to season ticket holders that “the name was never a label. It was, and continues to be, a badge of honor.” Yet dusting off the old dictionary suggests otherwise.

In the current edition (the 11th) of the best-selling Merriam-Webster Collegiate Dictionary, redskin is defined as an “American Indian”—with the label “usually offensive” added for clarification. But when did that label get added—and how has Merriam-Webster defined the word over time?

According to Peter Sokolowski, a lexicographer and Merriam-Webster editor at large, “redskin” first made its way into an M-W dictionary in 1890, when its unabridged International defined the word in this way:

A common appellation for a North American Indian—so called from the color of their skin.

That was just the beginning. Here’s how Merriam-Webster’s definition changed subtly over time:

1898: A different line of M-W dictionaries, the Collegiate, adds an important distinction in its first edition:

1909: The unabridged New International drops the “so called from the color of their skin” from the 1890 edition.

1910: The usage label “often contemptuous” is left out of the second edition of the Collegiate. But why? “I really couldn’t speculate,” Sokolowski said. “The fact that it was there in the 1898 means that it was generally understood to be used in a ‘contemptuous’ way at that time (today we would use the term “offensive’). It’s been too long and the manuscript, if we had it, would probably only show the line through it and not the rationale. Space was always at a premium in print dictionaries, but that’s not an excuse, it’s just a fact.”

1934: A year after football’s Boston Braves changed their name to the Boston [Redacted], the second edition of the unabridged New International dictionary also lacks usage labels in its definition of the word.

1983: Seventy-three years after dropping “often contemptuous,” the ninth edition of the Collegiate adds the label “—usu. taken to be offensive.”

2003: After the Collegiate‘s 10th edition retained the above label, the 11th edition changes it to “usually offensive.”

Obviously, Merriam-Webster definitions aren’t the only way to gauge a word’s connotation. But this short timeline should put to rest the notion that considering “redskin” a slur is nothing more than a contemporary “wave of PC-ness,” as one noted father-in-law misquoter recently wrote.